Kaido of the Beasts, also known as the "Strongest Creature in the World", is the Governor-General of the Beasts Pirates and one of the Yonko ruling over the New World. He and his crew currently occupy Wano Country in alliance with its shogun, Kurozumi Orochi, and most recently have entered into...

I think that King will be defeated by Sanji and Zoro will fight Orochi(although I think he is weak) and Killer will fight Queen.

What do you guys think ? 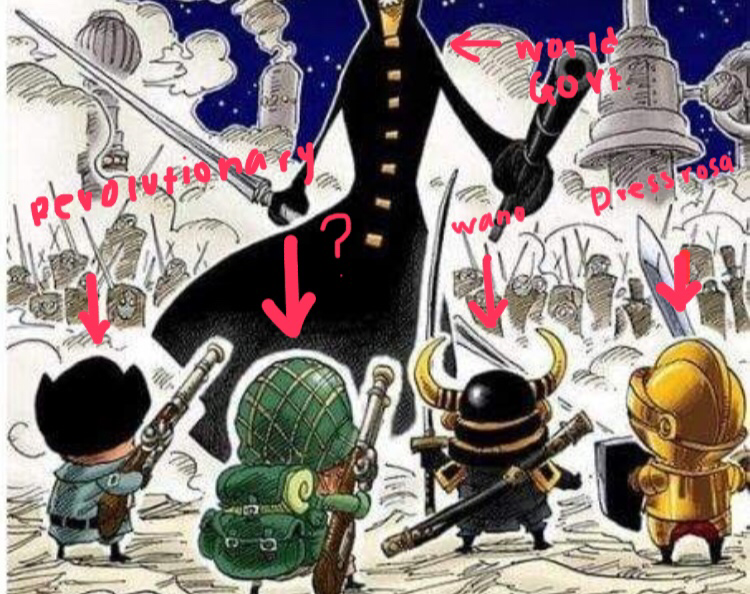 I think the crew and all the rebels are currently already on Onigashima being held captive.

How they got there, I don't know, i presume they were rounded up and teleported there while they slept by the Oniwabanshu / Mimawarigumi, with the help of the spy.

My reasoning for this comes from the OP to Wano, where Luffy breaks out of a cage to fight Kaido head on, meaning he is already on the island.

The OP always has spoilers to the boss fight.

I predict that somewhere in the wano arc zoro will fight kaidou because of the great sword enmma but in the manga he gives up shusui for it. I wish Oda could cut to the chase😅.

How about at the tail end of one piece, luffy goes up against blackbeard, Zoro goes up against Kaido, and Sanji versus Big Mom. I believe that would be the perfect ending for the series, even though it appears that Kaido’s end is in Wano.

Who do you guys think Luffy, Zoro and Sanji should have thieir final battles with in the Wano arc?

I think it would be interesting to see Zoro go after someone way beyond his power level because this is the arc where he has to shine and go all out, I think Sanji and Big Mom would be interesting too because of the whole cake island arc ( Zoro and Sanji teaming up would also be fun) and finally something that is clearly implied: Luffy vs Kaido but again if Blackbeard makes it into Wano somehow I'd rather have Luffy go against him and Zoro (after he's given Enma) fighting Kaido.

I was just curious for those in favor with this idea, how does it make sense that Zoro will be fighting Shiryu later in the series if he kills Kaido this arc?

Like either Shiryu is an actual god or Zoro will proceed to have zero challenges except Fujitora and Mihawk for the rest of the series.

It will also set Zunisha free

What do you think guys ?

I don't know how I never made this connection before. But, I just checked to make sure and the kanji for onigashima is literally "demon island." Then of course there is the giant ass skull. Now, we have Kaidou and the Numbers who are somewhat similar to him. They like to drink like Kaidou and they are very large creatures. On top of that some of them even carry around clubs.

Even though obviously power-wise King and Queen are stronger than the Numbers they don't seem to be directly commanding over them. In other words I think it's likely the Numbers and Kaidou are both of the same demon-ish race.

If it's necessary we could propose Kaidou as a half human half demon hybrid and the Numbers as purebloods.

They could of course be continent-pullers [ancient giants] the point was that they were related and of demon-like origin.

If this is the case then Kaido is Zoro's fight because of his history and Big Mom would be handled by Luffy obviously not alone.

Even Hawkins wouldn't be able to predict what's going to happen 😂.

Ok you got the black beard three fruit theory and a lot of folks think he will end up in wano and some how obtaining kaidos mythical zoan. I personally think he will be handed not a loss but he won't be able to get it. But he will end up with orochis I do not think Luffy and the massive army will actually defeat kaido but he will and big mom unwillingly join Luffy. This ties into the fact that he is building up his fleet by asking moria to join him he already has a former adimral to Blackbeard showing up in full force at the end of wano whilst kaido is wounded with his full fleet and a zombie moria army is a battle that maybe would get them all to join luffy. And doing so stop him getting the zoan but orrochi he will be stopped and black beard ends up with his mythical zoan ? Look I'm going work not got time to write properly lol.

Anyone knowing when does the new chapter come out.

Hype is real for the Big Mom VS Kaidou!!

Possibly one of the best chapters of wano if not the best.

Big mom fighting kaido ( sky spitting etc.)was amazing and the fact that kaido ordered her release because he obviously has confidence in his own strength to think that he could take on big mom or even beat her in a fair 1v1 also this should answer the questions about kaido's strength; saying this because there have been some doubts about it in the wiki ......so I don’t about you but there aren’t much characters that know deep down they could beat big mom or even challenge her, but yea I don’t wanna right an essay like my guy aurius-blood usually do 😂 (no pun intended) so I’ll go straight to the point..... so in the chapter big mom offered king to join her crew because he was one of the races that was missing in whole cake island, we know that he’s not a giant so the great question is........What is king? What race? And are you hyped for the future background story? Write your thoughts about this matter below, I really wanna read your thoughts on this.

I was thinking about something

If luffy could defeat kaido in one verse one or with someone help then won't it make sense that zoro can defeat big mom?

Since luffy and zoro are close in strength

Does anyone think luffy is going to bring her aboard the sunny to fulfill aces promise in his stead by the end of wano arc or no? After all, by the end of the arc im sure shes going to have played a unique role in their win over kaido or is her age going to be the factor after all shes been training for those 4 years since waiting for ace.

What are your thoughts on yesterday’s episode? And also shanks became without a doubt the most interesting character in one piece. Not forgetting that now we know that kaido and linlin have a past

SPOILER ALERT 🚨 ...........Guys the episode we’ve all been waiting for is finally here, next episode we’ll get to see hopefully 3 yonkos and if we’re lucky enough a flashback about big mom and kaido finally the useless princesses are out of the way and also kinda disappointed we didn’t get to see rob lucci in action.

We’ve seen 2 yonkos have their own territories and I think big mom’s the coolest, then we’ve seen kaido’s . Does shanks have its empire??

If kaido really wanted to kill him self why tf didn’t he jump in ocean water? I’m pretty sure he ate a mythical zoan