Well that would just confirm he had Funkfreed since that age I think? It still could have already been a sword with the Zou Zou no Mi at that point.

A reply to Felicia Typaldos
0

There's also Funkfreed, Spandam's elephant that is a sword that ate the Zou Zou no Mi. It would be cool if we'd see more of these, unless Oda dropped that idea and won't use it moving forward.

Also the animal doesn't HAVE to be something besides a carnivore. Carnivores are known to eat fruit or plants "occasionally", for different reasons. And like with Funkfreed there also could be the situation of a human, maybe the government and Vegapunk, intentionally feeds a devil fruit to an animal. I mean, they've fed one to a sword.

心は女, is literally used to describe identifying as a woman in japanese. To a japanese reader, the intention is clear. There is no doubt about it.

The literally use this in their definition for Transgender.

If you search 体は男 心は女 (Body is male, heart/mind is femal) on google you find pretty much exclusively results about transgender. (Even if you don't know japanese, as a word written entirely in Katakana it stands out between kanji and hiragana:トランズジェンダー)

I didn't mean for you to feel called out on every point I've raised. using singluar, plural and general "you" all together might have been a bit confusing.

Also my comment about someone being transphobic was in response to another user, who's comment apparently has been rightfully removed. I don't know if you thought it was directed at you, Dot4447, but just in case, it wasn't for you.

What I want people to realize is that one character refering to Kiku as a man, while Kiku expresses, presents, and refers to herself like a woman, doesn't make Kiku being referred to as he/him any more valid as canon than Kiku being a woman she/her.

The very fact that one statement from an outsider (a prisoner and not Kiku herself or anyone who knows her personally) is prioritized over the entirety of Kiku's gender expression is where the problem lies. Especieally, since like I mentioned before, it'll be so much easier to prove Kiku does see herself as a man after all, than FURTHER proving she sees herself as a woman beyond "My Heart is a Woman."

Wow, that is like textbook hate speech, I encourage to read the guidelines yourself before asking to ban a specific group of people (for a terribly transphobic reason nonetheless)

2. Be nice and treat people with respect. Keep discussions civil and be open-minded about differing opinions. Any user who goes out of their way to make discussions an unwelcoming environment for others, such as trolling to evoke a response will face consequences.

(it's literally the second point, omg how did you miss that)

I'm honestly very shocked at how comfortable some people are one here with spouting transphobic comments.

While I agree this dicsussion should be kept on the Talk page, I do wanna respond to something Dot4447 said here specifically:

Not just about Kiku, but in general, I highly encourage you to reexamine what qualifies as what a person identifies as. Because the problem is, "preferred pronouns" like we use them in english, simply do not exist in japanese. If you want more explicit proof for Kiku to identify as a woman, you are setting a nearly impossible standard. For example, the manga of Attack on Titan is almost 30 volumes now, and one of the central characters, Hanji Zoe, has not ONCE had their gender specified in any way shape or form.

Because Japanese works like that. In japanese, you cannot be any more clear than saying "My Heart/Soul is a woman" (which is a more clear translation, as the "at heart" one uses an english prhase that I feel like many people get hung up on).

Especially in a shonen manga liek One Piece that is set in a very fantastic world, where you don't really encounter a need to specify a gender.

So when a person from the trans community themselves says that "My heart is a woman" completely suffices as expressing their gender identity, thne PLEASE just listen to someone who knows more about the subject than you? And really sorry but having a gay friend does not give you an authority on the topic.

It'll be very easy for a later chapter to reveal the Kiku identifies as a man after all, but making it even more obvious than "my Heart is a woman" is not gonna be that easy. (You might even argue Oda could be scolded by his Editor at Jump if he brings it up again)

The Problem is that you hear some random prisoner call Kiku a young lad, and you jump at changing all the pronouns to he/him.

But you insist that YOU decide what sufficent evidence is, and you set it at a bar impossible to reach through englis-japanese discrepencies and translations.

This is not just about Kiku, you essentially board off any character from possibly ever being recognized as trans unless they are ridiculous exaggerations like Ivankov.

I hope you get my point.

Also if you are interested in this, there is an ongoing discussion on this issue on Kikunojo's article "Talk" page. It's probably better to join that conversation rather than spreading the discussion out too much. It would get really hard to follow.

As far as I remember, One Piece is a name given specifically to Rogers treasure. Since he was such a famous pirate people were wondering where all that treasure went after he'd be executed. So during his executtion he said "Well I hid it, so go ahead and find it yourself"

So there isn't really a mystery about WHAT One Piece is, it's more about where and how to get there. And again, it's out of question whether or not he had it since the name itself refers to his treasure specifically. Unless you are arguing whether or not he actually did hide it or just pulled everyone's leg. But I think Whitebeard confirming that One Piece exists, as well as Oda mentioning in interviews that he wouldn't do something like "The One Piece was the Journey and friends you met along the way <3" are proof enough.

It doesn't have a culturally meaning in Japan. (There does exist signs in Japanese using the middle finger, but people are smart enough to recognize your intentions)

In this day and age, thanks to shows and movies, it is known, albeit as an imported gesture.

Soo in short, no, he's just flipping people off. The reason it's changed in the anime is because it's an obscene gesture that I guess crosses the line for "kid friendly" television.

If you want to be real specific, Kiku didn't actually confirm or deny whether or not she has a male body either. Any translation that has a "Yes, but..." added that in out of assumption. "My Heart is a Woman" is literally the only thing Kiku says in response to this. (Thje japanese is: "心は女です。♡", "Kokoro wa Onna desu.♡" )

So if you want to be really specific with the least amount of assuming going on, Kiku is a woman. PERIOD. 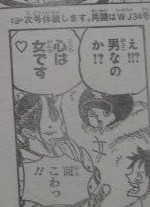