This discussion has been coming up on fb so I thought it needed a post here!

So fans are divided regarding Yonkou v Admiral power levels.

Some think Admirals are stronger. This is not true. Kaido is confirmed strongest in the world lol BM is a match for him (from their Greeting at Onigashima). Either of them would solo an Admiral.

It is pretty clear that Yonko are stronger than Admirals and it doesn't appear that way for one reason: Age. We know from Don Chinjao, Lao G, Garp etc. that Haki fades with age (Luffy beat Chinjao, who rivalled Prime Garp so I think their fighting power is reduced bu 80%) with advanced age. We know WB was old, sick, and wounded when fighting those Admirals, but its not just him ...

None of the Yonko are Prime Power. BM Kaido andShanks are past Prime (Yonkou are weakened) and Luffy is not yet Prime. BB maybe*, but he doesn't fight. He relies on the Yami Yami no mi and running

So the discrepancy here come from the stage of the era that they are in. The Yonkou are experiencing a changing of the guard, while the Marines have trained and implemented new Admirals (the big 3) as well as drafting new ones.

Even so, they are pretty evenly matched. In general though, the Yonkou would be stronger than the Marines!

I just realised that Brook can talk to the user of his fruit, after he died (not previous).

Someone could have the same fruit as Brook now, walking around and medt,

If he died, then someone else could eat and all their ghosts could have ghost parties in the underworld

You can have a crowd of people with a bag of apples in the middle to all take turn eating the fruit, and then dying to return immediately... while the fruit is incarnated in nearby apple.

I made this post almost exclusively so that @GodUsoland wouldn't be the most active on this wiki.

But I might reupload a Kaido theory cos it occurred to me.

Oars and Little Oars Jr are part of a race called Ancient Giants. They used to be big enough to pull continents around but have shrunk in size since.

That's why Little Oars Jr is many times smaller than Ace.

Kaido is many times smaller than Little Oars Jr. but has the same horns as them and so probably has some AG DNA. He is probably half new age AG and half normal giant since he has intelligence.

The numbers have the same horns so I think are descendents of AG too, or some offshoot.

The skull on the island has the horns too and so I think this race has connection to Wano.

Maybe Oda's big reveal will include theor race ..... only time will tell

(edited by moderator)
A reply to Whiz Almighty
0

Everyone should change your answers to say Dadan

A reply to I am the manager
1

I was planning on beating them all anyway.

There is the lie that Usopp had 8000 followers that hasn't come true yet so he could be in charge of a fleet of 8000 giants.

Usopp - Brave Warrior of the Sea

I think Nami will keep Zeus and maybe even get Prometheus, making her strong.

I think Usopp has already kinda mastered his Observation Haki too. He has always had good eyes

Maybe when judge dies and leaves Sanji in charge of Germa, he will be able to lead them into the War

Who the hell is isuka

After the war with the Ancient Kingdom, the Red Line was formed.

This decimated the whale population. It cut off migratory routes, and whale calves got caught in Reverse Mountain and seperated, unable to return.

One Piece is for the whales. JoyBoy, the hippie, made a promise to Save the Whales. In order to do this, he needed the help of the Sea Kings, (who are inclined to Save the Whales because they are of the sea), to destroy the Red Line at Reverse Mountain and MarieJois.

(edited by TheresTheG)
A reply to PREMANANDA PAI
0

Just to clarify, cos I don't read Kanji;

You would write Raftel as Ra-fu-te-ru

That would make sense

@Commander Pyre yeah there was a little showdown in the manga, where Roger kids were facing off against the WB kids and Shanks amd Buggy start talking about Teach.

When he visited WB it was to warn him against Teach who he already fought. ThIs might suggest the Pirate Shanks was talkimg to the Gorosei about is Teach again.

So I think Shanks and Blackbeard's story has been allowed to develop offscreen, and hinted towards with Edward Weevil

Next Flashback has to go to one of the more important characters in the series.

Roger's adventure is finishing up, there might be one more chapter before back to Present-day Wano, and the raid.

I think the next flashback going into the final arc is the Shanks backstory. He is the Yonko Kidd was gonna face and he is at Wano now

He has been set up as a legend since the first episode and there are so many loose ends. Can he teleport, with Lucky Roo hence why he can appear at Marineford and Mariejois?

Can he see the distant future, which is why he advised Whitebeard to give up the search? And the Gorosei? Is that why his crew's background is from all 4 oceans? Did he hand-select them based on something special?

His crew is mysterious and he knows something I swear.

Him and Blackbeard are gonna have to get taken down before Luffy is crowned PK anyway.

Kill a DF user with an apple in your pocket. If you place it on their body as they die, then the fruit will appear in front of you

A reply to PREMANANDA PAI
0

Whoa dude, first of all. Thanks for the reply :)

That was awesome. That really cleared it up.

So I guess Japanese audiences wouldn't know the rage we feel with translation differences lol. But then again, they wouldn't know how to read what it says on Log Poses or Wanted posters.

The Blackbeard reveal has a lot of theories surrounding it.

[>Mine, personally, is that Xebec never died, but retreated to the darkness, as the previous owner of the Yami Yami no Mi.

He chose Teach to be his vassal (as a D.) and lives through him, talking to him. Xebex is alive all day and Teach cries to the moon at night.]

Anyway, there is a youtuber that predicted it in 2016.

And with the skinniest of leads. You will never guess the clues that led him to it 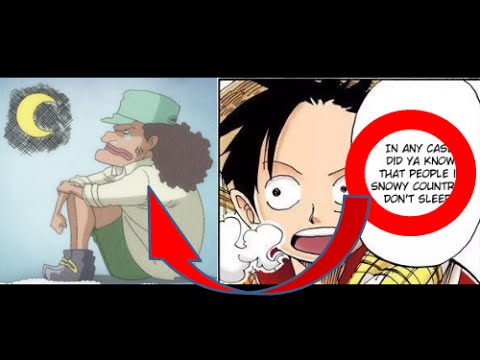 Luffy mentioned about Blackbeard in Chapter 124. ONE PIECEYouTube