First off, we are going to leave off the fact that Akainu got into Ace’s head after talking about WB. Also, no WB Pirates or any other allies! This is strictly the ones named on the title & also all versions of characters are current versions of the manga ch 1015. Anyways yeah… if current Luffy would have pulled up to Marineford with his crew & the Fleet, would they be successful in saving Ace ? Or are they too weak ? Me personally, I think they have a chance. They got the numbers to match the WG forces with the Fleet & also Luffy, Zoro & Sanji would wreck havoc on the battlefield… the admirals might be the toughest ones to deal with! The Crew is much stronger up until Wano right now, so Brook, Robin, Franky & Jimbei would be making a mess out there too! Even Nami, Usopp & Chopper can inflict some damage. I would dive in deeper with the Fleet but for now yeah this is how I have it! I wouldn’t say a complete victory but they definitely have a chance….

Tomorrow, The Kurozumi Spy will be revealed, As a Manga Reader, I already know who this "Person" is. Anime Only's if ya don't want to be spoiled for tomorrow's episode, leave and come back after you've watched that episode. Don't know why you clicked on it anyway.

Oh, Kanjuro, what a hateable character you are, yet your such an amazing villain.

We start at the beginning, Kurozumi Kanjuro was born 59 years ago to 2 unnamed dead people, After seeing his parents getting killed on stage by some dudebros, Kanjuro went hiding and he eventually found other members of the Kurozumi Clan, Orochi, Old Hag, and an Old Man, They offered Kanjuro his Devil Fruit, and decided to make him a spy of The Kozuki Clan. After some shenanigans with Kozuki Oden and Friends, he became a retainer of That aforementioned Kozuki Oden. He served as one of Odens retainers for 21 years. After being send 20 years into the future by Toki, he send Orochi a message that He, Kin'emon, Raizo, Kikunojo, and Momonosuke had arrived. During the voyage to Zou, Kanjuro got stuck at Dressrosa. After being freed by The Straw Hats, he traveled with them to Zou and eventually Wano, On The Night of The Raid, He revealed himself as the spy. DAN DAN DAN, Be honest nobody saw that coming, What an amazing actor that dude is, Wano as a whole has many great actors, Kyoshiro, Old Hag to name a few, But Kanjuro was the best. After faking his death a few times and killing Kiku 1 time, he gets slashed down by Kin'emon, who he called his best friend while on stage, and he dies happily

While I still hate Kanjuro, I think that he's a great villain and an amazingly written character. His entire life was an Act, he was born on stage and he died on stage, as he always wanted, Kanjuro died in the way he wanted, getting killed by his best friend on the stage, Now he needs to stay dead, If he is not, that would ruin a brilliant character arc.

Episode 977, Tomorrow's Episode will reveal him as a traitor (At least I hope)

That scene will shock the Anime Watchers, I want to see their faces on that reveal. I hope that Toei won't ruin that scene

Anyways, that's it for this post, what's your opinion on Kanjuro? Do you like him? or do you hate him? Let me know, in the comments below.

The Big 3 Akainu, Aokiji & Kizaru are all on the same level as the Yonkou in terms of power. All the possible 1 on 1’s are super close to debate! I mean just look at what Akainu & Aokiji did to Punk Hazard. Kizaru is already light speed & in his intro we see him absolutely destroy the Supernova without a sweat, not to mention his impressive feats.... aside from Blackbeard who is the absolute strongest one out of the 7 being discussed, the Big 3 can definitely stand toe to toe vs Big Mom, Kaidou & Shanks. Here are the matchups for you to visualize:

Also, another thing we can discuss is that if we switch the current Fab 5 Supernovas with the Big 3 in place of the current fight in Onigashima vs the 2 Yonkou, I’m pretty sure they would win that battle.... let me know your thoughts on this topic!

Edit: please take a look at this impressive stuff from Kizaru....

“The Summit War saw Kizaru battling, if only briefly, several of Whitebeard's division commanders,[34][25]including the Emperor's "right hand" Marco,[20] and later Whitebeard himself (whom he was able to seriously injure)[18][22] on equal footing, Whitebeard and Marco being the only pirates to prompt the admiral to fight seriously in any measure. Also, despite his more or less constant involvement in the fighting that went on, Kizaru was ultimately one of few people to emerge from the war wholly unscathed, not a mark to show for it.[23]”

I mean the whole series is, but this was one of the best chapters in a while. 2 potential deaths and even Kaido getting sentimental. If Oda doesn't kill either Kiku or Kinemon I will be very disappointed, because that is one pieces greatest flaw. Kinemon in particular would have a great conclusion to his arc, and Momonosuke's too.

I also am craving Kaido's proper backstory more than ever. 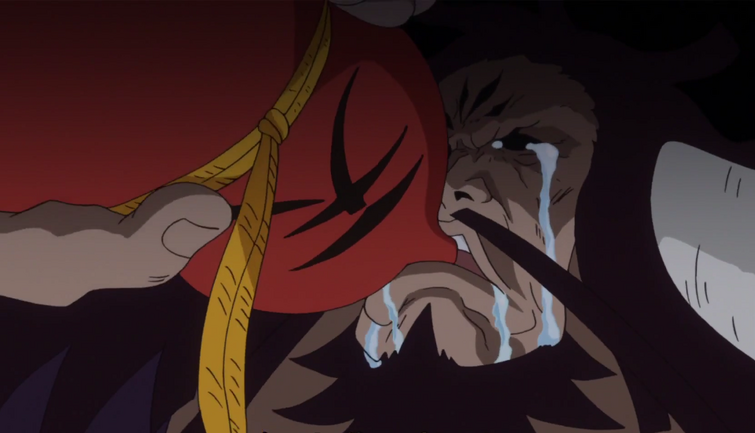 I have to hand it to Oda. he really knows how to subvert and increase expectations. Seeing Luffy advance his conquerors was really cool, but seeing him get cocky and challenge Kaido alone...not so smart. I feel like a lot of people were rooting for him so badly that they forgot who he was fighting. This isn't Doflamingo, or Sir Crocodile, or Katakuri. This is Kaido, an emperor of the sea. I also feel like a lot of people forgot the cardinal rule of fighting him: When it's a one on one, always bet on Kaido.

Now, am I a Luffy hater? No, but I didn't enjoy Luffy's cockiness when he unlocked advanced conquerors. Hence, I was overjoyed when Kaido whooped his ass saying "The come out was obvious. You gained a powerful weapon..and let get to your head boy!" Of course I'm hyped for when Luffy wins, but I feel like he needed to be knocked down a few notches, and Kaido definitely delivered the blow needed to hype up the end.

Even though Luffy will eventually win, I hope he doesn't single handedly take down Kaido. I feel like if nothing else, make Kaido live up to his reputation in the sense that he will not be beaten in a one on one. I hope it's a group effort, but that everyone grows from it. I also hope that Sanji gets a powerup soon, because it feels like Zoro has left him in the dust. Give him the sharingan or something useful.... 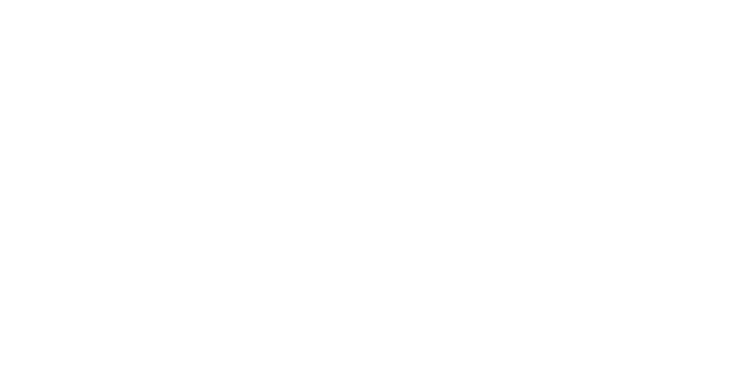 Well this is going to be a very interesting fight especially for Robin whom i don't recall having a one v one battle since Skypeia but her first opponent just so happens to be Black Maria a Tobbirobo of all people. So who do you think will win🤔🤔 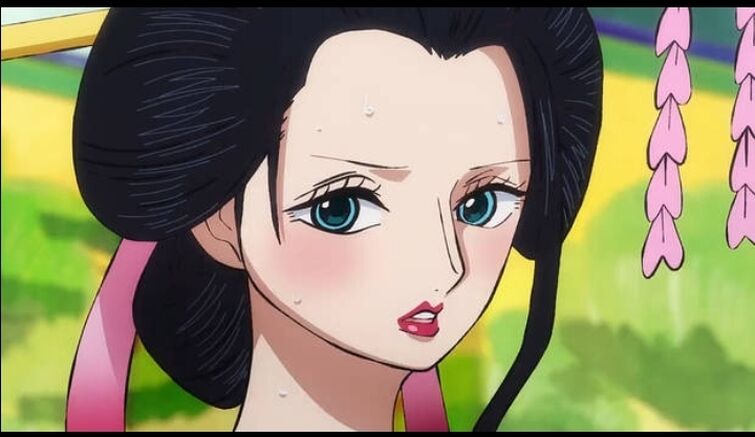 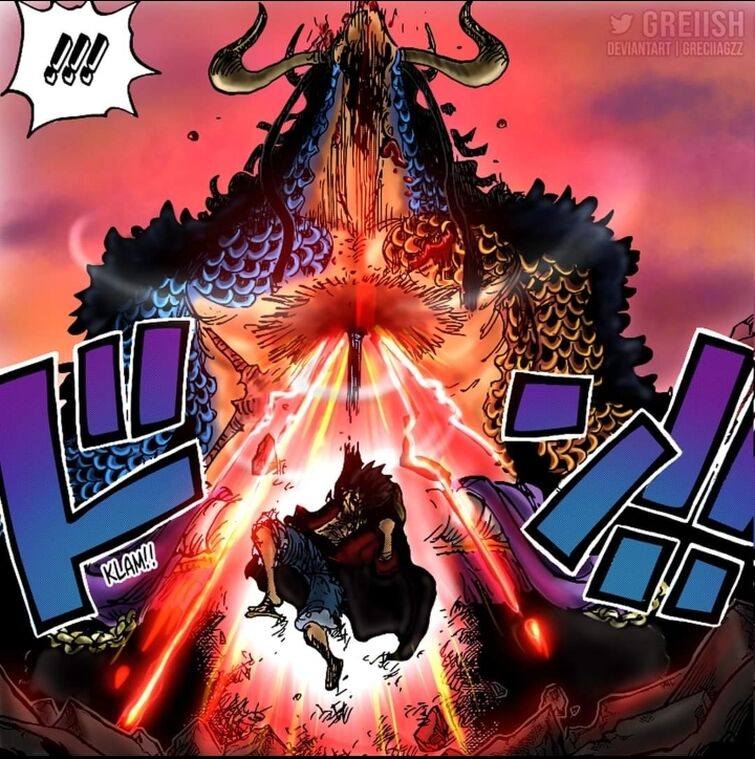 Hi! I have just read the 1012 from manga and Im wondering.....How does Ulti even think she will defeat Big Mom? Literally she one-punched Page One, and now is angry cuz Tama. I know it looks like is going to be a Nami vs Ulti, but I don't think BM will keep looking considering she did hurt Tama. Who do you think she will face?

On Yamato's page, it says that Yamato's debut was chapter 971. Yes, we see someone from the chest down that probably is Yamato, but it's not really a debut. Shouldn't it be chapter 983, where she makes a full appearance, or 984, where we see her face and the little introduction text box?

In chapter 586 & 966, in this same situation, Luffy and Roger both told the guys something. Then they both said “huh” and started laughing. This has to be important considering Oda is censoring what they said and spanned this like close to 400 chapters. Does anybody have any ideas what they could’ve said? 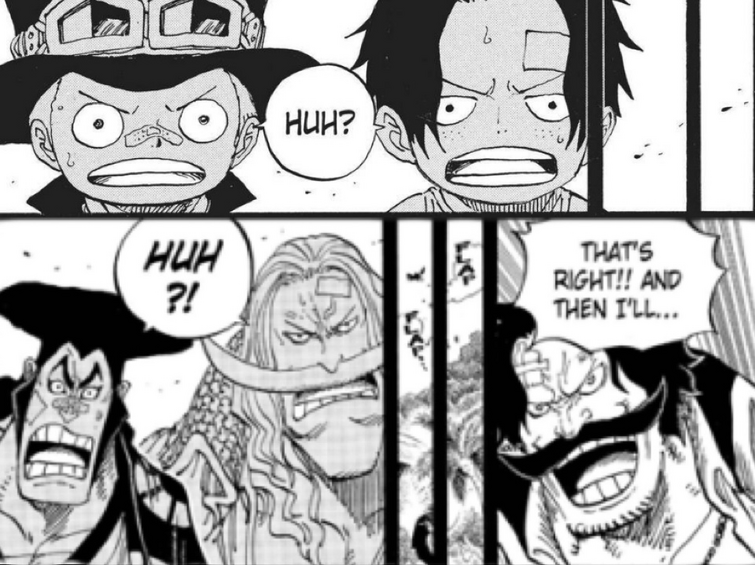 I was rereading wano, and I saw the Luffy vs Ulti and Page one fight, and Yamato's interveneance, and, wasn't she using haosoku? For Ulti's reaction(Falling inconcious) and for The lightnings that came out from the Kanabo, I'm sure that she was, so I think we can add her to the confirmed users

Don’t read this if you are not caught up, or spoil yourself....

First of all, let me say that this panel right here is absolutely badass!

This is such a hype moment right now, we have a stacked lineup of absolute great matches: Luffy vs Kaido, Big Mom vs Ulti, Hawkins vs Killer & Black Maria vs Robin 🔥 Tama is the MVP of this chapter, because she literally saved Usopp & Nami from being absolutely destroyed! Big Mom earned my respect this chapter with the last panel & her quote: “Don’t you know.... that even in the cruel world of pirates.... there’s still a code of honor ?!! You clowns!!!” Also I believe that Nami will definitely get Zeus since Big Mom has Hera now. 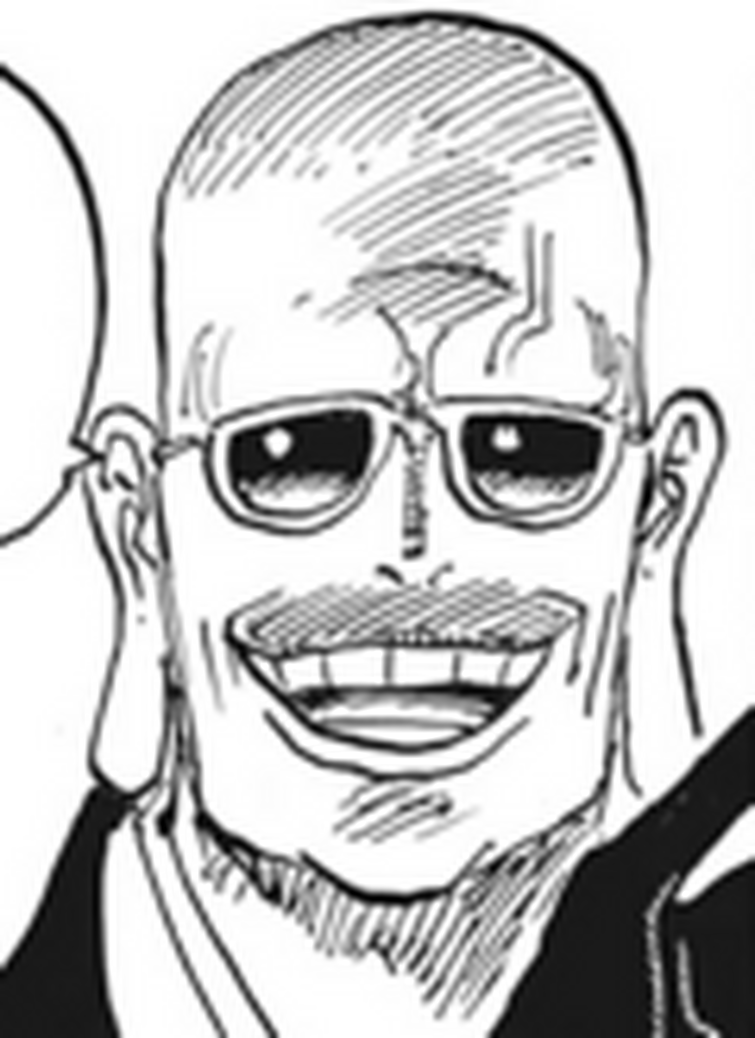 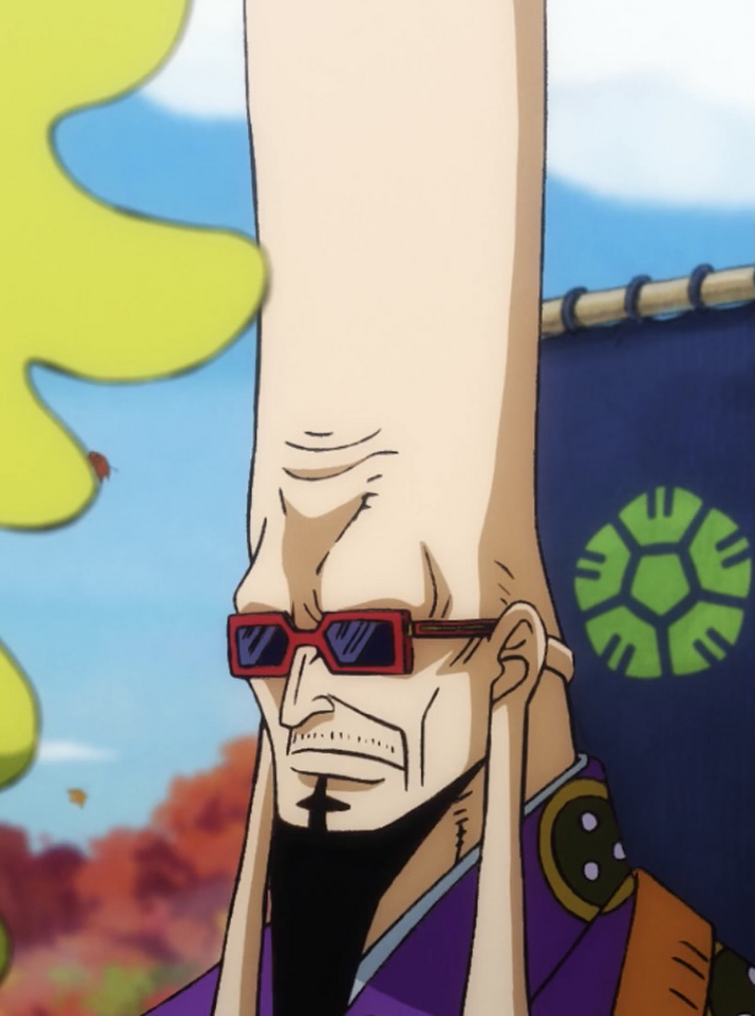 There will be spoilers so if u wanna know what I gotta say keep reading:

So Zoro just discovered his conqueror's Haki, and I wasn't too surprised by it. But that brings up another question, does Sanji have it?

Bc Sanji is the son of the leader of Germa 66, the man who is very close to conquering North Blue, and they are of royal blood. So if Zoro could have Conqueror's Haki within him I see no reason that Sanji couldn't

I've read the recent chapter, and i see the wikis' pages saying Kaido is confirming Zoro's use of it even if he himself isn't aware. But is Kaido not just speculating because Zoro was able to injure him with his Asura technique? Is it not premature to count him among the Haoshoku Haki users?

I'm seeing some mixed interpretations on how long we've got left of the series and wondered what peoples opinions are.

How many arcs do you fans think we have left? What's left to wrap up. Who needs to confront who. What lore bombs need to be let off. Has there been an offical timeline from the author on how long he intends to carry on? Any other thoughts?

How do you guys feel about Law’s appearance in Marineford now compared to when it happened ? Honestly, I though it was really stupid when he appeared in the war at first. The reason is because it didn’t make sense since he is an actual rival to Luffy since both are apart of the Worst Generation / Supernova’s. Also there wasn’t no indication at all that he would even risk it all just in order to save Luffy. This has changed months back, since now it all makes sense why he sort of cares for Luffy. First the revelation that Traffy is a member of the “D”, and we learn that Law wants to know the truth about the “Will of D” and Law believes that Luffy will be the one who will “cause another storm” like Corazon said.

Act 3 is pretty disappointing so far. I don't have a problem with the events of the story, I have a large problem with the pacing. Most chapters dart around to multiple locations and ruin the pacing of a good scene, like the recent Ice Oni sequence. I'm hoping that Oda fixes this because it's bringing Wano down a lot for me.

Does Ulti have conquerors? Cuz when she clashed with Luffy, the Conquerors Haki was being released from both sides.

31 Posts•New reply 5m ago
The Manga