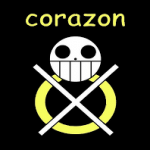 and I don't know what I want to say again, Thanks.

Lee has the power of Logia Special Devil Fruit, he could even make a tsunami.