One Piece Wiki
Register
Don't have an account?
Sign In
Advertisement
in: Manga, One Piece Volumes
English

A guide to the overall organization of the One Piece manga. For specific, numbered chapter and volume listings, see the Volumes tab.

The One Piece manga is initially published as a serial in the anthology magazine Weekly Shonen Jump. As the magazine's name suggests, a new issue of Jump (and thus a new chapter of One Piece) is released on a weekly basis. Accounting for the magazine's holiday breaks and Eiichiro Oda's personal hiatuses, approximately 45-48 chapters are published per year.

Roughly three to four months after appearing in Jump, chapters are reprinted into tankōbon (単行本, tankōbon?) volumes. These collect an average of ten chapters each, with higher-quality paper but smaller (B6 as opposed to Jump's B5) pages and all color art rendered in grayscale. To compensate, they also include new cover artwork, a question-and-answer column by the author, fan-art galleries, and various other bonus features.

At irregular intervals, chapters are also reprinted into larger Complete Collections (総集編, Sōshūhen?), which retain most of the Jump publications' paper quality and formatting. These attempt to compile complete story arcs whenever possible, and as a result may collect anywhere from twenty to forty chapters.

Chapters and Volumes by Sagas and Arcs

A quick overview on the Chapters and Volumes by sagas and arcs.

Where They Are Now

Further information: Where They Are Now

Each volume is released with a dust jacket, featuring the volume's "main" cover-art, spine, Author's Notes, and publishing information. The cover-art - different for each volume - is always colored, and headed by the series logo, the volume's title, and the overall volume number. The bottom of each cover depicts Eiichiro Oda's name, in both kanji and romaji.

Volume 50 has a different format of cover changes from the standard title, then picture synopsis, to a picture (of Nami), the title (that is surrounded in flames), and is then followed up with the pictures of Zoro, Luffy, and Brook. This change was likely done to commemorate the fiftieth volume of One Piece.

The cover of the physically-bound volume inside the dust jacket - commonly called the "Inside Cover" or "Secret Cover" - is usually a sepia reproduction of the dust jacket's cover-art. However, there are some exceptions:

The inside back cover usually shows a sea chart. Starting from Volume 25, Oda has started drawing a small ongoing story on the inside back cover of Volumes that can barely be spotted using his Easter Egg characters. here there are also some exceptions:

Each volume's title page (which reiterates the volume's title and number, as well as Eiichiro Oda's name) features a bonus illustration of one or more characters. For the first two volumes, these were original pen-and-ink drawings; Volumes 3 and on, however, simply reuse images from prior publications, most often covers Oda drew for recent issues of Shonen Jump.

The Story of One Piece

In each volume after the first, the title page is followed by several pages collectively titled The Story of One Piece. These contain an overview of the series premise, a synopsis of the current storyline, and short profiles of all significant characters and groups. Depending on the story's complexity, they may also include features such as maps.

(Select characters are always profiled here, regardless of whether they actually appear in the volume. This was once unique to Shanks, but after the time-skip was extended to all of the Straw Hat Pirates as well.)

On irregular occasions, volumes may run a Storyboard Presentation (ネーム大公開, Nēmu dai-kōkai?) between chapters, showing Oda's rough layouts of select pages. These vary widely in resemblance to the finished, published pages; a few even depict scenes or compositions that were excluded entirely.

From Volume 4 on, almost every volume has interspersed its chapters with a question-and-answer column called the SBS (質問を募集する, Shitsumon o Boshū Suru?, "I'm Taking Questions"). The questions, submitted by readers throughout Japan (and, occasionally, other countries) are usually answered directly by Eiichiro Oda, and are thus considered a source of series canon.

From Volume 5 on, every volume has included a gallery of fan-art submissions, "hosted" by Usopp. This feature is usually placed at the very end of the volume, but may occasionally be used to intersperse chapters in place of the SBS.

(This feature is mostly excluded by Viz's official English release; see Translation and Dub Issues below.)

Rarely, a filler page reprinting a single small panel will be inserted to maintain proper recto and verso alignments and keep double-page spreads intact. From Volume 7 on, these have traditionally been used to magnify Pandaman cameos from the preceding chapter.

Viz Media's English-translated volumes, currently published under the Shonen Jump Manga line, retain most of the Japanese volumes' composition and formatting, differing in only a few aspects: 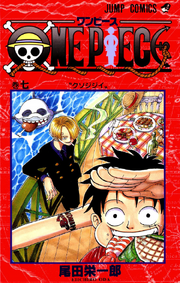 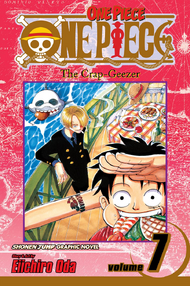 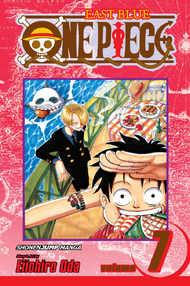