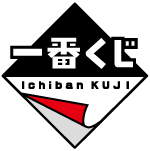 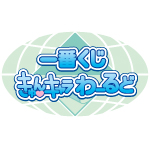 Ichiban Kuji is a lottery handled every month by Banpresto. Each session features a specific set of Shonen Jump titles with exclusive lots, sometimes along other more common products. To participate to the lottery and maybe win items, you must buy ¥500 tickets in Japanese convenience stores (also called combini), toy stores like Jump stores, bookstores or Namco game centers. Premium sessions may call for ¥800 to ¥1,000 priced tickets instead. Generally, one store gets a pool of lots, containing a total of 100 lots with their accompanying ¥500 tickets. Some stores actually even allow people to pre-order a whole pool for the regular wholesale price of ¥50,000. The quantity of each prize is fixed by Banpresto for one pool. Here's a sample of what kind of allotment a pool can get, taken from the December 2009 session of Ichiban Kuji Premium K-On!:[1]

Nevertheless, items can generally be bought directly in combini and specialized shops after a short while. Ichiban Kuji literally means The n°1 Lottery, or more explicitly The Best Lottery.

The Last One prize is simply the prize you get when you buy the very last ticket at a shop. It's a new concept that Banpresto introduced during the second semester of 2011.

Mid-November 2010, with a session dedicated to K-On!, Banpresto started to apply a Super Deformed rendering to anime characters. They put those particular sessions under a new Ichiban Kuji brand: The World of Cute Characters (きゅんキャラわーるど Kyun Kara Wārudo), often lazily translated as Kyun Chara World. Kyun is a Japanese onomatopoeia used to express the tightening of one’s chest caused by powerful warm feelings of love, a feeling usually expressed by girls when seeing cute (i.e. moe 萌え) things. In 2012, Banpresto started to release some as regular UFO prizes under the Kyun Chara One Piece brand.

Ichiban Kuji has been launched in 2003 and any information on sessions from 2007 and older are actually scarce or missing. However, pictures of the very first sessions way back from 2003 can still be seen on this dedicated One Piece Goods Album article, listing prizes from Ichiban Kuji One Piece Part 1, Part 2 and Part 3.

Here are some pictures of prizes featured in the 1st Ichiban Kuji sessions:

Banpresto also launched the Ichiban Kuji Collection series. It maybe was the alternative name of the lottery at a time. Here are some items under this brand name:

The early March 2008 session did feature exclusive One Piece items. However, you could only win some posters and cards.

This session of mid-May 2008 was more interesting as you could win high quality figures along more various items than mere posters.

一番くじワンピース～スリラーバーク編～
The third session of 2008 is about a complete set of figures and plushies that could be won as prizes from the late December 2008 session of Ichiban Kuji.

一番くじワンピースフィルム～ストロングワールド～
This session has rolled out in late November 2009 and is focused on the 10th movie, which has been released in cinema theater around the same time. To benefit from the momentum the movie still had thanks to the release of the anime adaptation of episode 0, Banpresto has reproduced this session for a bis repetita on early May 2010.

Note: The bases of the 8 figures (prizes A to H) can be combined together to make a diorama of the complete Mugiwara crew.

一番くじワンピース～マリンフォード編～
This session deals with the events that occured in Marineford when Ace was captive. It's been set for a late May 2010 release, with a 2nd session for early August 2010.

一番くじ ワンピース ～マリンフォード編 スペシャルエディション～
{C}This 3rd session dedicated to the events at Marineford was released in early November 2010, with recolored versions of the biggest prizes and the inclusion of some WCF figures to replace the smaller ones.

一番くじ ワンピース ～マリンフォード最終決戦編～
Released mid-March 2011, this session deals again with the Marineford Arc events. It's been re-released then on a 2nd session early September 2011.

一番くじ ワンピース～新時代幕開け編～スペシャルエディション
{C}Late October 2011, the Opening a New Era session has been repackaged as a Special Edition, with returning modified figures and some originally coming from the WCF figure series. This session has the peculiar condition of having been available in bookstores only, as it's marked as Bookstore Limited (書店限定).

一番くじ ワンピース ROMANCE DAWN for the new world～前編～
Early November 2011, this session focused on the Straw Hat pirates as they appear when gathering at Sabaody Archipelago after the time skip and before going to Fish-Man Island.

一番くじ ワンピース ROMANCE DAWN for the new world～後編～
Mid-February 2012, this session introduces the crew mates missing in the first part.

Ichiban Kuji One Piece ～The Legend of Edward Newgate～

一番くじ ワンピース ～The Legend of EDWARD・NEWGATE編～


Late April 2012, this session theme is about Whitebeard as its title implies.

Ichiban Kuji One Piece ～The Legend of Gol D Roger～


Late May 2012, another One Piece legend, Gol D. Roger, gets the IK special treatment.

一番くじチョッパー
This session has happened in May 2009 and dealt with Chopper exclusively.

一番くじチョッパー ～サウザンド・サニー号～
This session is focused again on Chopper, with some Thousand Sunny Go thematics added for good measure. It has begun on early February 2010.

一番くじ ハッピーバースデー チョッパー コーナー
Early December 2010, Banpresto will start another session dedicated to Chopper, this time themed after his birthday, which in on December 24.

一番くじ ヒストリー・オブ・チョッパー
Released early September 2011, this session deals again with Chopper, putting into figures some of his more striking poses.

一番くじ チョッパー「行くぞ！魚人島」
Released late December 2011, this session focuses on Chopper as he appears on Fish-Man Island.

Ichiban Kuji The World of Cute Characters -One Piece-

Released mid-February 2011, Banpresto focuses to a larger cast of cute versions of One Piece characters instead of simply relying on Chopper natural cuteness.

Ichiban Kuji The World of Cute Characters One Piece ～Shichibukai～

Released late July 2011, this session is the continuation of the previous Ichiban Kuji The World Of Cute Characters session, this time focused on the Shichibukai.

Released late January 2012, this Kyun session is dedicated to various well known pirates of the One Piece world.