Master Stars Piece, alongside the Special Quality figure series, is one of the series produced by Banpresto to go along their strategy of making very high quality figures, going over the market segment occupied by Megahouse with its Portrait of Pirates series. It involves male characters from successful Japanese franchises like Dragon Ball, Naruto or One Piece. However, figure availability seems to go systematically through raffles or other kind of campaigns.

The name series can be broken down as followed:

Obviously, the name is a pun on the word masterpiece to emphasize on the quality intended for this figure series. On advertisements, Banpresto breaks the word Master further down as being the acronym for Maximum, Absolute, Supremacy, Throne, Enthusiasm and Raptly.

The first figures of the line were unveiled during the Jump Festa'11 event, held on December 18-19, 2010. And the focus was indeed put on the sculptors with the launch of a promotional operation in the form of a tournament where sculptors could compete to get the maximum amount of public votes via a dedicated site, the Zōkei Tenkaichi Budōkai. This way, between January and May 2011, the public could choose the best Dragon Ball model (zōkei 造型 in Japanese) between a selection of 10 prototypes. The winner got his model produced as part of the Master Stars Piece line and received the grand prize of one million yen.

The first One Piece character to enter the line is a figure reprising the model that was already used for the One Piece Super DX The Portgas D. Ace figure. This time, the figure has an added materialized flame going up from his right fist, an improved paint job and a slightly modified color scheme.

To get it, you had to participate to a raffle from a dedicated webpage, starting February 25, 2011. Then, winners got a postcard inviting them to participate to the next Banpresto Hakurankai バンプレスト博覧会 (in short バン博, litterally Banpresto Expo), held on March 20, 2011 at the Big Site in Tokyo. During the event, you had to spend ¥2,000 for an unlimited access during 1 hour to the UFO catchers containing the figures.

The next in line focuses on Monkey D. Luffy. Advertisements emphasize on the fact that the model was produced by KENGO, the same sculptor that already committed the models for One Piece Super DX The Portgas D. Ace and One Piece DX Figure -Brotherhood- figures.

On November 17, 2011, a limited edition of the Nintendo DS game One Piece: Gigant Battle! 2 New World was released along the Special Color Ver. of MSP Luffy. The only difference between both versions is the paint job, the special version using brighter colors.

On March 4, 2012, during the Banpresto Expo 2012, a new limited version has been released under the name Event Limited Ver.. The differences are about the paint job, which uses a sepia style this time, and the hat on Luffy's head instead of being held by his right hand. This time, the procedure to get him was still to catch him from UFO catchers as usual, 1 play costing ¥300. But if after the 3rd try you still could not catch it, you would just get it without further ado, i.e. for a maximum cost of ¥900. 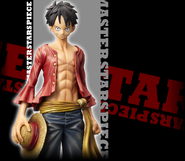