View source
watch 01:32
She-Hulk Trailer Dropped - The Loop
Do you like this video?
Play Sound

Mattel is an America-based international toy manufacturer that produced One Piece merchandise in English speaking territories from 2005 until 2006.[1][2] Mattel's products were based on the 4Kids English dub of the anime. 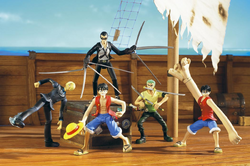 These figures were released in January 2006 with an MSRP of $12.99 and age rating of 4+. Each figure featured a rip cord section. These figures also came bundled with the promotional DVD 'The Hunt Begins', featuring character bios, music videos and highlights from the 4Kids dub of the anime.

The figures in this range included: Luffy, Zolo, Sanji and Krieg. 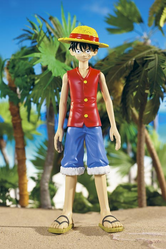 A set featuring a toy cannon that fires miniature cannon balls and a small figure of Luffy covered in black dust after firing the cannon.

Released in January 2006 for an MSRP of $19.99 and an age rating of 4+. A set of three battery powered swords (Zoro's Wado Ichimonji, Sandai Kitetsu and Yubashiri) with electronic sounds and a sayas.

Originally released in 2006,[3] this toy was recalled on August 14, 2007 due to concerns that magnets from the toy could fall out and be swallowed by children.[4]