One Piece Wiki
Register
Don't have an account?
Sign In
Advertisement
in: Humans, Male Characters, Frontier Agents,
and 4 more
English

Mr. 9 is the code name of a former Frontier Agent and bounty hunter of Baroque Works, and Miss Wednesday's former assigned partner during her infiltration.[1] Due to his actions, he is one of the main antagonists of the Reverse Mountain Arc, and a supporting antihero in the Whisky Peak Arc. He is currently married to Miss Monday.

Mr. 9 is a young man who wears a golden crown on top of his red hair and has his agent number written on his cheeks. He wears a green suit with white lace along with a ruffled red scarf. His attire makes him look like a prince or a king, but he isn't.

After two years, his hair is much longer, and he has grown a bit of a mustache. He wears a different, longer scarf and has erased his agent numbers. His clothes also look different, lacking the lace that trimmed the collar and sleeves. His crown is the same, though. [3]

Mr. 9 is very sure of himself and very loyal to his friends. His favorite phrase is "Bye bye, baby;" these were his last words to Miss Wednesday before he attempted to hold off Mr. 5 so she could escape. Unlike Officer Agents, who seem to believe that friendship is a sign of weakness, Mr. 9 is shown to highly value friendship and loyalty, as shown when he fought for Vivi's sake. Due to this, it is proved that he does indeed have a more heroic side to him, in contrast to his role as a Baroque Works agent.

He seems to have a superiority complex, wanting to appear to be a prince. He also tends to perform noble gestures in a very uncouth manner, such as bowing and raising his pinky finger when grabbing an object.

He and Vivi were partners at Baroque Works when she was Miss Wednesday, both working as a team without a problem. When she is identified as an intruder in the organization, he shows his friendship by defending her and fighting Mr. 5 and Miss Valentine so she could escape. He claimed that while he did not understand the circumstances, he would buy her time due to their long relationship as partners.

Initially, he and Miss Monday were companions as Frontier Agents at Baroque Works, working together at Whiskey Peak. At some point during the timeskip, they ended up being a couple and having a child.

Mr. 9 was skilled enough to become a Frontier Agent. He uses his metal bats in conjunction with his acrobatic skills to deal damage to foes. His body is quite flexible, as he is able to perform several acrobatic jumps and cartwheels. Despite this, he is a weak foe; his acrobatics being useless against Officer Agents such as Mr. 5, and he is clumsy enough to fall off a building unprovoked while fighting Zoro.

Mr. 9 wields two steel bats and uses them in conjunction with his "acrobatics". With the momentum generated from his gymnastic feats, they can be quite powerful. He also hides steel ropes within the bats, allowing to subdue foes as shown in his fight against Zoro. However, this technique was used against him, causing his defeat. He also used a bazooka during the Reverse Mountain Arc and was seen wielding a pistol when first introduced.

He and Vivi (known as Miss Wednesday at the time) met the Straw Hat Pirates while trying to kill Laboon in order to bring the whale meat to Whisky Peak as food for the town.[5] The Straw Hats gave them a ride when they accidentally lost their Log Pose.[6]

As they navigated towards the island, Miss Wednesday and Mr. 9 jumped overboard before landing on shore.[7] That night, Vivi and Mr. 9 met up with Igaram, who informed them that the Straw Hats had fallen to hell. When Miss Monday showed up and questioned whether they should have thrown that party for the Straw Hats when the town was already short on food to begin with, citing the Mr. 9 pair's failure to get the whale meat, Vivi and Mr. 9 defended themselves by claiming they had tried their best. Vivi was shocked when Igaram showed her and the others Luffy's bounty of

After Zoro displayed his strength by effortlessly taking out dozens of bounty hunters, including Miss Monday, Vivi and the other agents assumed that he was the real captain of the Straw Hats and that the Marines made a mistake with their bounties.[10] Mr. 9 fell off a building while trying to kill Zoro.[11] After Mr. 9 managed to bind Zoro with the iron wire stored in his bat, Vivi held a sleeping Luffy hostage with a knife and told Zoro not to move as Igaram prepared to attack. However, Zoro threw Mr. 9 into a building before slamming him into Vivi, and both were defeated.[12]

After Vivi's identity was exposed by Mr. 5 and Miss Valentine,[13] Mr. 9 tried to hold them off to allow her to escape, as he had grown fond of Vivi during their time together. He declared that they were still partners, effectively placing his loyalty to her above his loyalty to Baroque Works. Mr. 5 was irritated by this and finished him off with a Nose Cannon attack that knocked Mr. 9 into a river.[14]

From the Decks of the World

Mr. 9 is shown two years later alive and well, still living in Whisky Peak. He and Miss Monday have apparently married and had a child, and he was seen playing with their infant.[3]

The following events are Non-Canon and therefore not considered part of the Canon story. 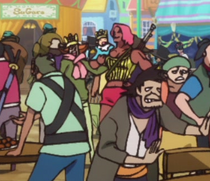 He, Miss Monday and their baby are attendants at the Pirates Festival in Delta Island.[15]