One Piece Frame Collection is a series by Plex of framed wanted posters, with some 3D effect parts to enhance their display.

This frame series has been initiated in 2009 for the 10th anniversary of One Piece TV animated series. The success was unexpectedly so good that it sparked other similar frame collections with various rendering styles, but only the original formula seemed to work as Plex has only gone on with the 3D effects.

A frame has a size of about 9 x 6.3 cm and represents a unique character in various poses. The associated card, representing a wanted poster, does not have to follow the design of an actual wanted poster as drawn by Oda Eiichiro in his manga series. The frame always come with a stand part, so it can be displayed on its own, and a clip part, so it can be joined with other frames despite the effect parts can be in the way.

This set takes after the official wanted posters of the Straw Hat crew. 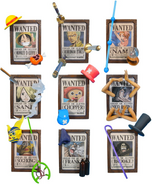 One Piece Frame Collection The Power Of Devil Fruit

This set is dedicated to the main characters appearing during the Marineford Arc.