Cover and Inside cover

The cover shows Monkey D. Luffy with his arm around his younger self.

The drawing of your dreams!

A drawing made by Oda of Chopper, Kureha, and Hiriluk sitting under a sakura tree. Includes the concept and sketches of the illustration.

Children to adults, we are the generation One Piece!

A lineup of the Straw Hat Pirates, with their child forms in front of them.

Why we love One Piece

The questions are asked to celebrities of all ages, ranging from ages 12 to 64.

History of piracy across generations

A full timeline of piracy in the One Piece World, split up across the Roger Generation, Gold Generation, and Worst Generation.

The Timeline is defined as below:

Let's have fun, all generations combined! Tokyo One Piece Tower

A multi-page advertisement for the Tokyo One Piece Tower.

A 4 page interview with Hiroshi Kitadani, the original creator of We Are! and OVER THE TOP.

A section collecting mail from readers, including a "family cosplay" section and haikus.

Why I Love One Piece

A compilation of popularity-based questions and their responses, according to the ages of the 3000 respondents. The results are listed below.

Who Is Your Favorite Character?

What Is Your Favorite Arc?

Each group also described their favorites part of a few arcs.

What Is Your Favorite Quote?

Your Favorite One Piece Memories

All ages groups are asked about One Piece's charm, in their opinion, and their memories with the series.

Who would be the ideal parent?

A comparison of different parental figures in the One Piece world. Includes actual parents, like Bell-mère and Vinsmoke Sora, and Zeff, as well as other parental figures like Nico Robin, Edward Newgate, and Shanks.

A preview chapter of the One Piece School spin-off series. It is not a real chapter from the series, but is written by the same author and acts as an introduction to the series.

A series of trivia questions about One Piece. The answers are included later in the magazine.

Information about the Yomi Yomi no Mi and the Kage Kage no Mi is explained, and their Fruit forms are revealed. 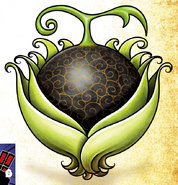 A 5 page interview with the voice actors of Nami, Sanji, and Franky - Akemi Okamura, Hiroaki Hirata, and Kazuki Yao.

10 pages of events related to One Piece that occurred over the course of the last year, including the release of One Piece: Stampede and the anime's 20th anniversary.

Information is revealed about One Piece Pirate Warriors 4.

In-depth information is given about Capone Bege, and his past, as well as his former control of the West Blue.

Chapter 2: Sad separation
Tells the story of Laboon and the Rumbar Pirates, starting when he leaves with them and ending when he remains at Reverse Mountain.

Nami walks through and explains the Puma x One Piece collaboration.

A 6 page interview with Tatsuya Nagamine, an anime director working at Toei Animation. The questions center around the creation of Wano Country in the anime.

One Piece Novel Heroines Nami - The shoe must go on!

A second preview chapter of the One Piece School spin-off series. It is again not a real chapter from the series, but is written by the same author and generally acts as a continuation of the first preview chapter.

One Piece Read Through Rakugo

Two rakugoka, Keiki Hayashiya and Kappei Yamaguchi, talk about rakugo and One Piece.

In-depth information is given about real pirates and the systems they worked in, and how it inspired aspects like the Seven Warlords of the Sea.

Information is given about real world weather phenomena, and how they inspired islands in One Piece, such as Venice and Water 7.

The answers to the quiz from earlier in the magazine.

Information about recent One Piece merchandise, such as figurines and plushies, is given, as well as other miscellaneous One Piece news.