For other uses of this name, see One Piece (Disambiguation).

In Japan, One Piece can be considered a stable product line and overall, most sold merchandise receives good sales. The most common manufacturer of One Piece toylines is Banpresto and most goods are manufactured in China and/or Taiwan where both labor and manufacturing costs are cheap. Because of interest in selling in Korea, many One Piece products carry the Korean One Piece Logo over the normal Japanese logo, which features a black flag behind the normal One Piece logo. Outside of Japan, most products are imported from Japan, either by subcontracted companies or directly by manufacturers themselves.

Arguably, due to the failure of One Piece in America and lack of promotion from 4Kids, related merchandise does not sell well. Toylines that do make it to high street retailers are often seen in bargain bins. Related products are also absent from many toyline stock catalogs, when other anime toylines such as those derived from the series Bleach or Naruto are found in great numbers.

One Piece toylines have also failed to become a success in the UK, more so than in America. In the UK, related products are seldom seen being stocked in shops. Most fans seeking One Piece merchandise have to seek out specialist shops, buy them from conventions, or self-import them from online sources.

Since Funimation took over the series and with the release of their dubbed version, a whole new range of merchandise is due out shortly as promotion for the series. It still remains unknown how successful Funimation's efforts will be.

It is possible that Funimation has given the merchandise license to Toynami, a company which currently releasing American duplicates of Excellent Model's Bleach PVC figure line. They are believed to hold the license due to a One Piece product they revealed at the 2008 Toy Fair, book-ends.

Two of the main companies releasing One Piece products are Bandai and Banpresto, well known in Japan for producing toys for every acclaimed Shonen Jump title. Nevertheless, the most acclaimed One Piece toyline is the Portrait of Pirates series, produced by MegaHouse, a company that specializes in producing figures.

A number of figurines were produced for the American market by Mattel, a toy making company that is based in China. Due to safety problems with a number of product lines produced by the company, on the August 14, 2007 a number of toys were recalled. Amongst the recalled products were 345,000 One Piece and Batman action figures.[1]

Several companies have released and are still releasing a lot of figure series related to One Piece. They began to release merchandise in early 2000 after the broadcast of the anime began as they acquired the rights on it, and since have never failed to flood the market with One Piece goods. While the more prolific companies are certainly Bandai and Banpresto, all active companies that are still producing One Piece figures actually are subsidiaries of the same Japanese holding, Namco Bandai Holdings.

Generally speaking, Bandai is focused on small to mid-size figures, sold with candies (the famous Ramune), while Banpresto produces mid to big size figures that can be caught in various UFO Catchers. Apart from those two companies, other outstanding companies are MegaHouse, which releases big size/high quality figures under the Portrait of Pirates brandline, and Plex, mainly known for their original unqualifiable merchandise and the Anichara Heroes figure line.

Note: the figure listing below should at least have every figure out since 2007 onwards. A lot of the older figure sets aren't listed because of lack of information or because they are too old for anybody to get a hold of anymore.

Most of the released figures are made to reproduced manga or anime style versions of the characters, respecting coloring and scaling.

SD stands for Super Deformed. These are mini-figures of about 5 cm tall, with big heads but little bodies. Most are produced by Bandai.

Gashapon are toys embedded inside capsules that can be dispensed from a vending machine by turning a crank in front of it. All gashapon series listed here are made by Bandai unless otherwise stated.

Funko is an American toy company that licenses characters from other companies and sells vinyl figures in their own art styles, which are similar to the Super Deformed style. The company's most notable line is POP! Vinyl, and the company also makes Mystery Minis.

Since the launch of the One Piece anime, several audio CDs have been released through the years of its broadcasting. Distribution was handled first by Columbia Music Entertainment. Avex Trax, since rebranded as Avex Entertainment, now detains all the distribution rights to One Piece related pieces of music.

The following listing does not contain any of the opening/ending theme song singles or audio CDs related to the One Piece movies.

This section just gives a quick overview of other kinds of One Piece goods, but is really not exhaustive.

Note : Due to the number of plushies produced regarding the series, only the notable plushies (i.e. ones produced as one-offs or in a collection) are listed below. 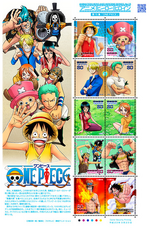 Japan Post released a commemorative series of ten One Pieces stamps in March 2011, each with a face value of 80 yen. The stamps come in five pairs, each featuring a single scene with at least two characters:

Winning Moves released a One Piece version of Hasbro's Monopoly board game in Germany on April 1, 2019. This game features artwork based on the Dressrosa arc, with a player token based on each of the Straw Hats and characters in place of properties.[2]