This is the collection of SBS sections from Volume 102.

D: Enough already! Everyone! Let's let Odacchi say "Start the SBS" every once in a while! Go on, Odacchi! (0.1 seconds later) Alright, now THE SBS HAS STARTED!! – P.N. Yato Sumitaro

O: YOU'RE VERY LOUD!! What the hell is this, right from the start!? Figurines can be spun around 360 degrees, so that idea is out!!

D: If Luffy, Kid, and Law played a game of rock-paper-scissors, who would win? Would it be Luffy because he can see the future? – P.N. Taisei (6-Year-Old Senior)

O: Okay! This is a great question! It's true that Luffy can see the future and could do that to win! But Luffy hates cheating, so I don't think he'd look into the future. The three of them don't get along very well with each other, I think they'd end up fighting no matter who wins!

D: Heso, Oda-sensei! If Enel were to actually become a pirate in the Blue Sea, I wonder what kind of Pirate Flag he would fly?? I'm very curious. Something like this? → – P.N. Shiba

D: I got so excited by the powerful scene where Momonosuke and Kaidou became dragons and squared off against each other!!! I wonder if this scene was modeled after the Twin Dragons painting at Kennin-ji Temple, which Odacchi had previously visited for an interview!? – P.N. Tsubocchi

O: That's right. I went to Kyoto before entering Wano Country. I saw it in person, there were two huge dragons on the ceiling, the painting was very impactful. I thought to myself: "I definitely have to draw this".

O: Here's a clear illustration, haha. This is totally fine. Franky can produce a cushion called the "Franky Airbag" from around the back of his head and waist, so he can sleep comfortably in any location.

D: Are the lines on Franky's arms hair? – P.N. Takataka

O: That's right! It's a well-known rakugo story. I know, I know, none of you listen to rakugo! But isn't the title cool!? The performance was the specialty of Master Beicho Katsura and the story is like a sightseeing tour through hell, it's enthralling.

D: Heso, Oda-sensei! I've always had a nose that grows longer every time I tell a lie, but nowhere near as long as my beloved Usopp's! Therefore, please tell me THE TOP 5 BEST LONG NOSES and THE LENGTH OF USOPP'S NOSE!! – P.N. Toy Bakery

O: I see. You've named a lot of different long-nosed characters, but I'm gonna leave out Tenguyama Hitetsu and the Giants:

Well then, starting from fifth place! It's Kaku! Next, fourth place is Usopp!! Aw, how unfortunate. As you'd expect, Usopp is no match for the competitors with height differences and huge faces! By the way, Usopp's nose is 13 cm. Now, third place is Catarina Devon! Second place is Arlong! And finally, the long-nosed champion is~! Vasco Shot!! The world is vast. I wonder if someone will appear and break this record!?

D: I want to become O-Nami's retainer, so can I have the big kibi dango that O-Nami has dangling from her chest? – P.N. Sanadacchi

O: Sure, no problem.

D: Hello, Odacchi! I've been wondering for a long time now, when and where did Luffy first learn the term "Pirate King"? – P.N. Masazou

O: He learned about it from Shanks' stories. Of course, Shanks didn't tell him that he used to be on the Pirate King's ship. Before meeting Shanks, Garp had told him to become a Marine, but since he wanted to be able to adventure freely, Luffy was already somewhat resistant to the idea.

D: Hello, Odacchi! Looking at the cover page of Chapter 1031, it seems like Bepo is the No. 2 of the Heart Pirates, right!? I was surprised because I thought that Penguin, Shachi, and Bepo were all tied for No. 2! Are you saying that Bepo (with Sulong?) is the strongest between them? – P.N. Pudding-ya

O: That cover, huh? Similar to Zoro, not all of those characters have the title of first mate. I selected the No. 2s as I saw fit. Usually, Shachi and Penguin are more dependable, but those two—who have seen Bepo's Sulong form—are no match for Bepo in terms of fighting power...! I acknowledge him. 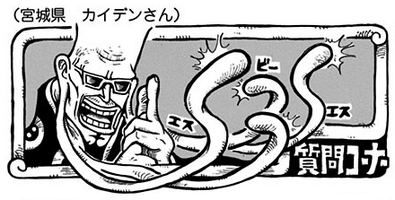 D: Kid and Killer are beyond cool! The other members of the Kid Pirates are drawn here and there, so could you please tell me their names? – P.N. Koutarou

O: Sure. Uh, I'll show you the rough sketches, but not of all the members. The Kid Pirates has 31 people. You don't need to remember them! Haha.

O: Alright! Previously, I asked you guys a question about those stripes covering Robin's chest when she uses Gigante Fleur! I received various answers! Here are some of them!!

D: That was the only scar I was able to leave that one time I fought Robin and she beat me to a pulp. – P.N. Tanigu Knows Reo

D: Those are Demonio Lines. Like how veins pop out when people get angry. If she gets angrier than this, you'll get Demonio Fleur!! They're the warning lines. – P.N. Kuriki Daichi

O: I see!! Thank you so much for all those points of view! Now, which was chosen as the official answer!!? Dadudududu~dum!! Take it away, Robin-san!!

D: Hello, Odacchi!! There's no end to the boob jokes in the SBS these days, is there? Are breasts the only thing men think about!? I'm fed up with reading this stuff. I was miserable when it became a booby-fest for an entire page in Volume 100. Are you nothing more than a pervert!!? But. Do you know...? The thing we ladies want to know... REVEAL ZORO'S CHEST MEASUREMENT!!! – P.N. Roromiki

O: A PERVERTED WOMAN APPEARED!!! This SBS Corner is over! Damn it! I don't care how big Zoro's chest is! About 110? The SBS ends here!

However, this volume has more SBS by Jinbe's voice actor, Hōki-san! (On page 168.)