This is the collection of SBS sections from Volume 18.

D: Hey, you guys who always start the SBS!! Have you ever thought of Oda-sensei's feelings?! Sheesh!!! Oh... sorry, Oda-sensei. Please say, "Please say 'Start the SBS' today." Huh? Are you sure? Oh, but I couldn't. Very well, if you insist... START THE SBS!

D: Oda-sensei, please settle down. Now, this is going to be extremely difficult for me to tell you but... YOUR FLY IS OPEN!!!! I'm so embarrassed!!

O: Aaah! Crap. My pants' zipper was down this entire time? Okay, I'll just take them off to make sure that I never have to endure anything as embarrassing as that again. Clank, rustle... okay. Continue the SBS.

D: When Dr. Kureha says, "My secret to youth?", what exactly is her secret? My senility is supposed to get much worse about now...

D: IF YOU WANT AFRODA-KUN'S LUNCH MONEY BACK, PRINT THIS IN THE SBS. from Grapemint Tanisugi. 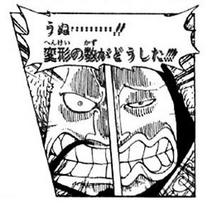 O: I'd like to take the time to make a little explanation for a certain group of my readers. In Volume 17, there was a character named Chessmarimo. He is a combination of the characters "Chess" and "Kuromarimo", and when he talks, it's supposed to sound like both of them speaking at the same time. In order to represent that in the manga, I stacked the letters on top of each other... But, oh how they came... A flood of complaints. From the mothers of small children. "This book is misprinted!!" They said that to the editors at the company. I'm extremely sorry. Please, mothers, accept it for what it is!! Just read the book instead. Chessmarimo is HILARIOUS, ISN'T HE?!! (completely unapologetic) 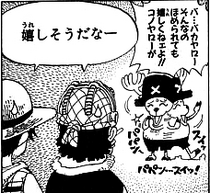 D: Hey -> Oda-sense -> One Piece -> is just sooo cool!! When I was -> in class -> I accidentally drew BUGGY -> in my notebook! I have -> "Accidentally Draw Buggy" disease! Oh yeah -> when Shanks and Buggy were young, they were arguing about which is colder, the North Pole or the South Pole -> Which one's right? Okay, goodbye.

O: Ahh, the flashback from Volume 3. The answer is, the South Pole. The Arctic is not a continent, it's just a mass of ice. Land is colder than water, so the Antarctic is correct. So Shanks was right. However, the South Pole is not the coldest place in the world.

D: MAAAAAAAHAHAHAHA, AIN'T YOU A HIPPO!

D: Hey, Oda-sensei. When Dr. Hiruluk got naked. WHY did there JUST SO happen to be snow obscuring the view of his MOST SPECIAL area...? by Ame no Kawa

O: If it didn't just so happen to obscure the view, you'd see his weenie.

D: Hello! Odacchi! I've noticed something incredible!! About Mr. 2 Bon Kurei. Why Mr. 2 Bon Kurei has that codename! The men have a number, and the women have events... so Mr. 2 is the male part, and Bon Kurei (Bonkure, the end of the Bon festival.) is the female part, because he's an okama, right?

O: That's right. The female agents' names are, in order, the happiest events of the year. So first;

...and that's how it works. I seem to have confused everyone with Double-finger.

D: And here is the question. Nami's sister is Nojiko. So what is her mother's name? Yes, you, the mangaka over there.

D: HEY, ODACCHI. WHEN YOU GET DOWN TO IT, JUST HOW LITTLE SENSE OF DIRECTION DOES ZORO HAVE? I want an equation with x and y, dammit!! By Zoro Inochi

D: My husband and I are huge fans of the "Hiking Bear". But we're curious about something. What happens if one forgets the "salute" (mountain-climbing manners)? We're so curious, we can't have any children!

O: Yes, that would be a serious problem... What I'm going to tell you is extremely important, so PLEASE remember it. Hiking Bears are bears that love mountains. They simply cannot allow people with bad manners onto the mountain. The punishment is this: sitting in correct Japanese style for one hour. It's very difficult. The people who suffer this have severely cramped legs, and they all say the same thing. "Please kill me, now". But the bears will not allow it. But that's what they get for insult the beloved mountain... (From the "Drum Kingdom Animal Encyclopedia")

D: Good evening. This is a question for Oda-sensei. "Möwe" (Seagull) on Morgan's chin, and "Krieg" (battle). German seems to show up a lot in One Piece. But do actual pirates have much to do with Germany?

O: Hmmm, probably not... In this case, I just chose words that "sounded" right to me. For the Krieg arc, "battle" was actually the main theme, so I chose a word about battle that would be easy to remember.

Retrieved from "https://onepiece.fandom.com/wiki/SBS_Volume_18?oldid=1673680"
Community content is available under CC-BY-SA unless otherwise noted.