This is the collection of SBS sections from Volume 23.

D: Salutations, Oda-sensei. This is my first ever letter, but I'm afraid to say I can't draw, I can't come up with any humorous questions, nor can I ever meer Master Brogy. So please, if you will. Please allow me to at least say the words that everyone longs to say... Ahem.

P.S. I'm sure you get many such letters like these, but I assure you I'm serious.

O: Oh, of course. Feel free to do as you wish, sir. I am merely honored to have you read my work.

Now then, let's get this goddamn corner started already.

D: Ei-chaaaaan!!! Nice to meet you. Ei-chaaaaan!!!!! Who is that guy?!! You know, HIM!! That BW guy that got cut down by Sergeant Major Tashigi in the "Ignition" chapter!! Does that say "I LOVE MISS VALENTINE" on his back?! Whoa!! I have a rival!!! Does that mean there's a Miss Valentine fan club or something?! Let me in if there is!!! Please!

O: Hohoh. Very quick to spot that, weren't you? "Ignition" is chapter 206, so you spotted it on the very first page on the very first chapter of this volume. Now that's a dedicated fan. BW has over 2000 members in it, so you find all sorts. As there are guys who feel like rivals to the Number Agents, there are also guys that idolize them. There are fan clubs, too. If you want to join, send your name, address and age to the Whisky Peak AFC (Agent Fan Club)... Oh wait, Zoro destroyed it.

D: APOLOGIZE, ODA-CCHI! Apologize like you're "Super duper damn sorry!" For your marimo shenanigans! My name's Mariko so ever since about the 6th grade, everyone's been calling me as "Marimo". But then you just had to go and make up stuff like "Kuromarimo" and "Marimo Head"!! And once I entered middle school (during Chopper's arc), people started saying, "Hey Kuromarimo-mossa" WHEN TALKING TO ME. What're you gonna do about it?! My life is ruined!

O: What're you talkin' about? I can see you smiling inside 'cause you're happy about it, aren't you, ya little joker! The next time they say that stuff to you, you say to them right back, "TAKE THIS, ELECTRIC-MARIMO!!"

D: Where do the Baroque Works go on their company vacation?

O: Apparently they just took a trip to the Hokkaido Winter Festival. But since it'd be bad for each agent to know who the other agents are, they all received their trip train tickets separately and went on vacation individually.

D: Brrrrrring... brrrrrrring... hello, Odacchi? Put your thumb in your mouth, and spin around. GIMME YOUR BEST SEXY POSE! Ehehehehehe... did it work?

O: Whoa, whoa! Did you see me just now? I was like, daaaaayuum sexy. Like professional model-level sexy. I... No wait, I shouldn't be doing this.

D: No time for introductions, just answer my question. Did Miss Goldenweek eat one of those fruits?

O: No, she... how should I say this? She's kind of like a hypnotist. Colors can already affect humans subconsciously such as exciting or calming us down. So she's a painter who can further enhance these effects, not a Devil Fruit user.

D: In the Cover Page Stories, there are "Camie the Mermaid" and "Octopako the Fishwoman". How are the races of mermaids and fish(wo)men related?

O: As you can see here, the ones with the bottom half of fish are "mermaids". The ones with fish-like upper halves are "Fish-Men". To illustrate the difference with an octopus, look to the right. As for the difference in their natures, mermaids generally try to be friends with other fish, while the Fish-Men try to rule the fish. That's the gist of it. Of course, their habitats are different too, but you'll see for yourself later on in the story eventually.

D: In Volume 20 of One Piece, I was surprised to learn that OP is also sold in Taiwan. And also the kanji-characters they chose to write "Nami". So what are the kanji for the other crew members and Vivi in Taiwan?

O: Hmmm. I've been getting a fair amount of questions regarding foreign versions of the manga, so I think sometime in the future I'll make a little page explaining stuff like that. Just give me a little time. It's being published in a lot of different countries, you know. One Piece, that is.

No questions, just two little games made by a reader.

D: Ssseeennseeeeii, wait a minnnnnnnnnuttttte. I... I... If Mr. 7 became Mr. 6, what would happen to his face?

D: Wassssup, Oda-sensei?! I have a question about Vivi and Zoro (doooon)!! Why does Vivi call Zoro Mr. Bushido?! (dogooon) I'm super super SUUUPER interested. Pleeeeeaaaaseeeee tell me! Bye!! See you in a million years!!

O: You know how if you start calling a friend by a funny nickname, you can't really go back? It's the same case here. In fact, if she were to suddenly start calling him Zoro-san, it would seem strange. I think Vivi will call Zoro Mr. Bushido for the rest of her life.

D: Oda-senseee! I always enjoy the One Piece manga and anime. By the way, there's something that's been bothering for quuuuuuuiiiiiite a while now. What kind of alcohol is the one that Doctorine is always drinking? In the manga, the bottle's labeled "UME" but is it ume as in plum???

-by Waiting to see Chopper-

Another game made by a reader.

D: Oh come on now, Odacchi. You don't even know what the "ran" in gakuran means?? Then I'll explain, just for you! The "ran" in gakuran comes from the esoteric Edo-period term for western clothes, "randa". How about that? Cool, huh? It's not ranpaku (egg white).

O: Oh, really? "Randa", huh? I see. I was so sure that it actually came from "lumberjack deathmatch" (the lumber is pronounced "ranbaa" in japanese). I guess I was wrong, then.

D: Okay okay okay! Question. BW is an abbreviation for Baroque Works. When I was in geography class and found out that BW was also used to represent "desert", I was so surprised!! That sounds like the worldly Oda I know. I have such deep respect for you! ...you knew that of course, didn't you sensei?!

-by Highschool First-year in Akita-

D: Draw the main 6 characters WITH YOUR FOOT.

SHOW ME YOUR SPIRIT, ODACCHI. 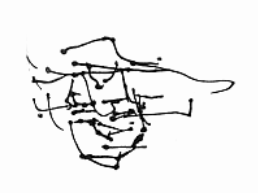 The SBS is over!