This is the collection of SBS sections from Volume 24.

D: JUST HOW MANY LITERS IS ODA-SENSEI?

O: Well... A little from column A, a little from column B. How do I explain this... Basically, when you first join the Marines, you are given a basic Marine uniform and cap. This is a pretty proud moment that you'd want to call home and tell your parents about. Private First Class (Ittouhei) and everyone below must wear these. So Jango and Fullbody are actually breaking the rules. For ranks Corporal (Gochou) and above, you can choose other types of uniforms or wear your own personal clothes. However, discretion is advised so that you still look the part of a Marine. Now when you attain the rank of Warrant Officer (Juni), you earn the privilege of wearing "Justice" on your clothes. For ranks Major (Shousa) and above, the Justice coat and suit is the most common attire. (For more info regarding Marine ranks, consult Volume 8.)

D: It takes a while for time to pass in manga, doesn't it? Since it's a weekly story. So, should we wait like 2 more years for Luffy's birthday?

O: No, no, no. He has a birthday every year, just like everyone else. It's just that, in Luffy's case, every year is his 17th birthday. Doesn't that make you jealous?

O: Ohh, he is there. Yup, that's him all right. What? But you want me to make a reply only 75 characters-long? On the reason why he's there?! Fine, here's why. BECAUSE... ah!! Crap, I' ve passed the character limit.

D: Nice to meet you today, Oda-sensei. Now, here is my question to you. Who is it that takes those pictures for the wanted posters distributed by the Marines?

O: That'd be this dude here.

He's extremely quick and can sneak into any place he wants. He is called "Flaming Atta-chan" because he yells "Fire!!" whenever he hits the shutter.

(An image of Attach with the following text)

No questions, just a little game made by a reader.

D: Hello. Here's my question, Oda-sensei. Among all your characters, which one do you think of as "most similar to yourself"? (I'm thinking I'm a lot like "Usopp"...)

D: About the Alabastian Civil War. I know there were 300 thousand royalist soldiers and 700 thousand rebels, but then in Volume 20, Chaka mentions "2 million angry warriors". Where did those extra 1.3 million guys come from? (I wonder if it was people who didn't join at first, like Toto, but then changed their minds...)

O: That's correct. Alabasta is a country with roughly 10 million citizens. To make things simpler to understand, I left out a bunch of things, but there are lots of other towns and villages besides the ones that appeared in the story. Hearing "10 million" might make 2 million seem smaller, but that's still an armed uprising of 2 million people. It's a very serious situation. A major rebellion.

O: FOR REALS?! Damn. Then you can't see the poop on it!! Is that because England is the country of Earl Grey tea?! Is it supposed to represent Earl Grey tea?!

Another game made by a reader.

D: Oda-chan! How you doin'?! (Inoki-impression) Umm, I have a question. In One Piece Volume 18, chapter 157, Luffy complains about lack of food with spirally eyes... but right behind him are Nami and her orange trees. Can't he just eat them? They're oranges...

O: Oranges... Yes, there are oranges...... However... To pick and take one bite is to taste instant death. Yes, instant death. Going a whole week without food is usually not enough to kill a human. So whether you bear through it for some greater purpose still remaining in your life, or pick an orange (death) and try your luck with the navigator's fury... That's a pretty big gamble... That being said, if her friends really were starving to death, I don't think she'd be cold enough to just let them die. *Brrr*

D: I need to ask you something, Oda-sensei. I want to give you a letter directly, but I don't know where to send it. Please tell me your address.

Umm. There are two adresses you can use. You can use the address for the editors' offices as written in Jump Magazine, or the special mailbox for the SBS questions only. Either way, it all comes right to me so don't worry.

D: How is it that the spikes from Miss Doublefinger's "Toge Toge Fruit" can also grow from outside her body (her clothes, that is)? 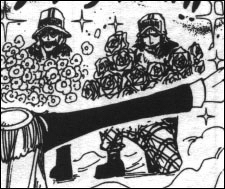 D: Hello, I am "Sam's Daughter". Wait wait, Oda-sensei!! I have a very big complaint! In Volume 23, the part with the quote that says, "We picked flowers for you" with the sfx that say *Flowerrr...!!* Yes, that part. Now doesn't Jango's flowers seem extremely LAZILY DRAWN? You probably just cut corners after drawing Fullbody's flowers! (this is you, after all...) HMPH! WHAT IS THE MEANING OF THIS?

I CUT CORNERS ON BOTH OF THEM (DON!)

D: You really like playing pranks, don't you, Oda-sensei? You're always drawing Pandaman everywhere... A-N-D S-O. I want you to let me play a prank, too. "The SBS is over". Something like that.