This is the collection of SBS sections from Volume 26.

O: Um... in the SBS Sections a few volumes back, everyone kept asking about foreign versions of One Piece. Amazingly enough, even I, the author, had no idea in which countries One Piece is published. So, I asked the Shueisha publishing's international department to investigate for me. Thanks to everyone that helped. Below is the list of countries and languages that One Piece is published in as of October 2002. You will definitely not be able to buy these versions in Japan.

There are eleven Countries:

There are four more countries that plan to publish One Piece in 2003:

That's what I heard. Amazing, right?

O: In the foreign versions, some of the main characters' foreign names sound rather interesting. Let's check them out now. Some are pretty strange. 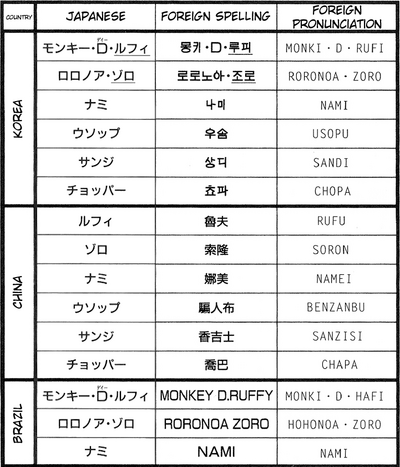 O: As for the anime, it's already in Taiwan, Hong Kong, Indonesia, Thailand, Singapore, Italy and Greece. So Luffy and the others are talking in those countries' languages! I want to see it... 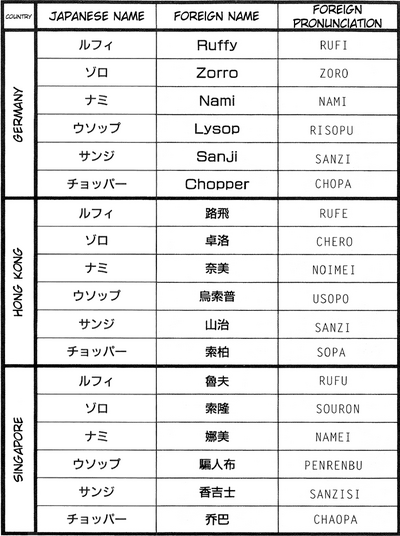 O: Different countries have different spellings, but a lot of them have the same pronunciation, so I picked the ones that sound unique and listed them. I didn't include Nico Robin because she hasn't appeared in the books published in those countries yet. Obviously they're behind the Japanese releases. By the way, sometimes I get mail from readers in foreign countries, but I can't read them. (Doh!) I can still understand their feelings, though, so I'm happy. Thank you.

The many faces of ONE PIECE! 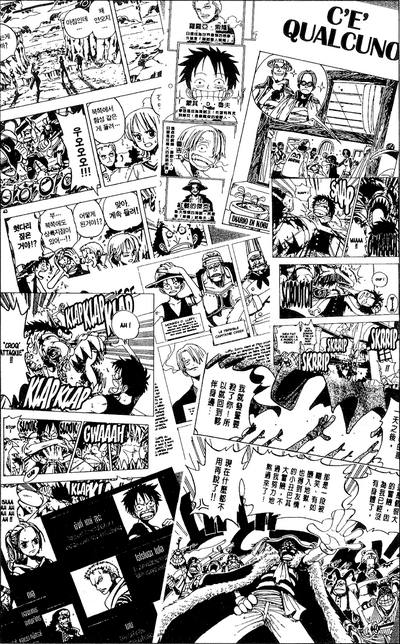 The "That's Not Good!" corner: 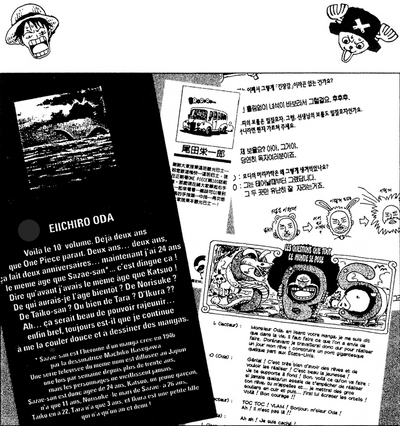 O: The one on the left is the cover insert for Volume 10 of the French version. It talked about how I am the same age as Sazae-san. Of course, French readers don't know about Sazae, so they had to add an explanation below. Sorry about that, making you have to go this far... from now on, I'll be careful and try not to blabber. (Yes!) Now, look at the right, I was surprised... they even translated "SBS"... it's such fine work... even these little Q&A games made it across the sea. Now all the kids in the world are going to say "Oh, the Japanese are so silly".

Ok, you are also our friend. 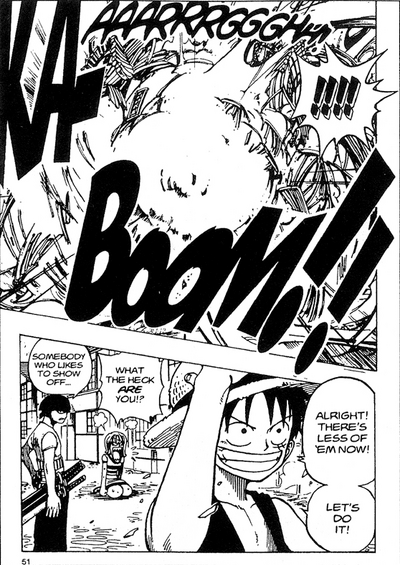 O: Oh... it's English. This is the American version. It only happened recently, but starting from November 2002, "Shounen Jump Weekly" is going to transform into "Shonen Jump" and enter the American market. The lineup for the magazine is: "Dragon Ball", "Yu-Gi-Oh!", "Sandland", "Shaman King", "Naruto" and "One Piece". Oh, I wonder what it's like. So that's it! Not only will you see One Piece in a lot of countries, but you'll also see lots of other Japanese manga series. I can't wait to see what will happen in the future, although I'll probably still be doing the same thing. Well then, the Special SBS International Investigation Committee is over. Starting from the next volume, the stupid, the fun SBS Q&A will return. See you next volume!!