This is the collection of SBS sections from Volume 32.

D: Hello, Oda-cchi! Nice to meet you. I have to say I'm quite ticked right now! "HEY YOU! ONE PIECE READERS! Stop starting the SBS without permission! We should aknolwedge Oda-cchi's status as the creator!" Whew, it's nice to get that pent-up stress out.

O: YOU'RE STARTING IT?! Ohhh, so that's how you're gonna play it, is that it?! Just when I thought I'd regain rightful control of the SBS as the creator too! WELL FINE! I'll wake up super duper early and get in line the next volume to finally start it myself!

D: Hello, Oda-sensei! Why does Gedatsu's hair change from scene to scene? Just how many locks of hair does he have? Please answer in Oda-speak.

O: Oda-speak, eh? I'm impressed you knew about its existence. Very well! The reason why Gedatsu's hair changes is...!

D:  A quick observation about Enel. When I realized that his line, "I am God" (神なり, Kami Nari?) is the same as the word for lightning (雷, Kaminari?), I thought I should recommend you as the next presidential candidate for the WOF (World Oyajigag Foundation), to which my father serves as the current president.

O: Well this is unexpected. I'm still a peppy young man in my 20s. Please don't. 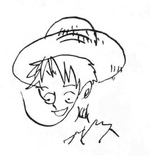 D: Odatsu-sama! If you roll your eyes to the back if your head, you won't be able to draw your manuscript!

(me trying to draw Luffy with my eyes rolled back) →

D: Salutations, your Grace. Forgive me for robbing your Grace's precious time but I bring a question. During the bath scene of Volume 23, the men attempted to peek at the nubile bodies of Nami and Vivi. Now, although I can comprehend why Sanji, King Cobra and Igaram wished to peek...

Why in the hell did Luffy, Usopp and Chopper peek too?!

-President of the Association to Prevent Peeping Boys, Shikobaya Pinoko-

O: Why, you ask? Well, that's because they are all healthy boys. I don't think there needs to be any other reason than that. But for Chopper, he might have done it just because everyone else was. Frankly, to not want to peep on a beautiful girl when she's naked is a great disrespect to that girl in my o-

Ahem, I mean, in Sanji's opinion.

O: Right. Thanks for the postcard.

O: The real answer is Nami's VA, Okamura Akemi. It's pretty hard to tell, isn't it? Fans of the anime, listen very carefully at the voices for the animals. Sokotsuya is one of the voice actors among the regular crew. 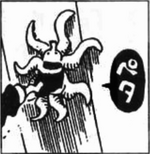 D: You know when Sanji and Usopp are climbing the ark on the 5th panel of Volume 30 p. 153? What exactly is Usopp wearing?

O: OCTOPUSHOES. They're OCTOPUSHOES. A brand new invention developed at Usopp's Factory, Octopak Shoes!! They have suckers on the back, so technically if you wear four, one for each limb, you should be able to climb anything, or so says Usopp, at least. We're not sure exactly how powerful they are. But anyways, try saying "Octopushoes" quickly ten times!

D: Good evening, Oda-sensei. It's a bit abrupt but let's have a match! Acchi Muite Hoi (right)!. I won, so here's my question. Just what are those things sticking out from the heads of Skypiea citizens? Some sort of supports? They're really thin though, so I can't imagine them supporting much. Please ANSWER PROPERLY! (says in a commanding tone)

O: ...I lost. I actually lost at Acchi Muite Hoi.... Umm, anyways, those things are like, uh, natural perms. They also call'em NABH (short for Natural Advertisement Balloon Hair). How can they stand up so straight despite being so thin, you ask? It's cause, uhh, they're giving their very best.

D: That "Conine" medicine that Mont Blanc Noland made really exists, doesn't it? The other day I just opened up a dictionary and happened to see a definition for "quinine", which is made from the bark of a "quina tree". Is that the basis for the medicine in the story?

-Chief of the Top Secret One Piece Intelligence Gathering Agency-

Quinine: An alkaloid made from quina bark. Works to relieve fever and stomachaches. Especially effective against malaria.

O: Yes. It does exist. However the "wood fever" that I described in the story does not exist, so have no fear. Covering topics about disease is always delicate, as there is always the chance that people will find it too upsetting or it has too deep a historical context. Therefore authors tend to fudge the details somewhat.

D: Oda-sensei, HESO! I am an 8-year old girl who likes animals and One Piece. I found a bird named "Aisa" in a book of animals. Did you take Shandia Aisa's name from the bird? -Nacchan-

O: That's right! It's a bird. Whenever I have trouble with a name, I just open my handy-dandy book of birds. It works pretty well for girls' names!

D: Hello! Odacchi-sensei. I've always wanted to ask you about something, and that subject is... the anime voice actors! I think it would be really neat and informative to have profiles or messages from the cast that breathes life in Luffy and friends! By the way, I am a big fan of Zoro's VA, Kazuya Nakai.

O: A lot of people are asking for this. I'll have to think about it.

O: So "Chinko Fleur"? (sounds like "wave your wang around")

Don't make me say that! This manga is an extremely refined and elegant piece of art.

D: What's the situation underneath thoses leaves around Wiper's waist? Is he letting'em "hang free"?

I think. But it must be troublesome to have them swinging wildly during battle. Hmm, maybe he's wearing some sort of loincloth underneath.

D: One day, my friend "H." was telling me, "Hey, did you know Enel's stretchy ears (<3) are actually..." and then he received judgement and was blown to smithereens...

What was he treying to tell me, even though he knew his life was in danger???!!!

O: Enel already left for the Fairy Vearth so I'll answer for him. Enel's stretchy ears are actually made of mochi... (sticky rice cake)

(Due to author absence, the SBS is now concluded)