D: When you're low on strength, Oda-sensei, do you use afro power as well? P.N. C-kun♡

O: Of course. You can't very well draw a weekly serial without using afro power. I wanna be the champion one day.

D: Oda-sensei, I have one question. And that is: what is a "cutlass"? Is it a sword? Or a gun? Please tell me. P.N. Chopper LOVE

O: Right. Well. As you can see ↓ it's a sword. It was said to originally be a knife used for skinning animals, that eventually became a short sword that sailors (and navy men) wore. In One Piece, they look like the figure drawn on the right. 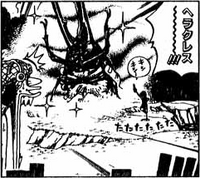 D: Oda-san!! It seems that lately, the admiration of men about the world, the "Hercules" and "Atlas" are sold in normal pet shops. What do you think of this? The adults of today could not imagine such a thing when they were kids! Is it good for a "man's wish" to be so easily obtained? Please, say something to the children of today!! P.N. Miyama Mei

O: I have received this postcard from a passionate adult. Yes. Long ago, we could not hope to see insects from other countries, so boys could only look at books of insects and dream of the Hercules Beetle, the largest in the entire world. And now you can easily see it right in Japan. It's amazing. However, when you think that the reason the boys of today can see these insects in person is because today's adults have fulfilled their dreams of bringing these bugs here, I think it's a wonderful thing.

D: When Zoro was being scouted for Baroque Works, what did Mr. 7 look like? by Double-Piece 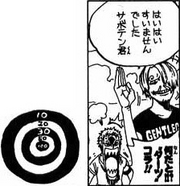 O: Was it too tough to figure out? I had several people ask this question. I don't think he was referring to the darts themselves, but the dartboard. Because it's all swirly. Geez! Stupid Zoro! Make a bit more sense, would you?!

D: Deer, Tanuki, Reindeer, Human. How many parts of each do you need to make a Chopper? P.N. Chopper LOVE♡

D: Good day, Oda-sensei. You know, that Nami-chan is so gorgeous!!! That beauty, that figure! I'm already swooning ♡ By the way, when you compare her to the Nami-chan in Volume 1, haven't her breasts grown somewhat? by Saori-chan

D: Howdy, got a question. What are the bounties in the world of One Piece based on? Is it strength? But in that case, wouldn't Crocodile's bounty of around 80 million Belly be a bit small? Or does it get higher the more bad things you do? Or is this just a mistake of yours, sensei? The answer to this question has lead to a "Forehead-flicking contest" that is currently spreading throughout my school. Help meeee!! P.N. Master Donuts

O: This is a tricky question, the more you consider it. The "Shichibukai" are on the government's side, so their bounties are removed once they are accepted. So the Shichibukai's numbers are called former bounties, but because Baroque Works was secretly formed after Crocodile became a Shichibukai, the number won't change to reflect that. If Crocodile still had an active bounty, it would probably be at least double that of 81 million. 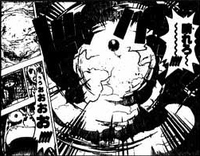 O: Well... how should I explain? First of all, all you really need to understand is the intensity of the scene. The Raigō is a mass of thunder clouds. Just think of thunder clouds as big masses of stress with electricity inside. The thunder clouds want to smash that stress into something. That's when lightning reaches down to the ground.

It's like when you hear "Lightning just fell on that tree!" Or "Yamada just got hit by lightning!!" That's called discharge. However, discharge doesn't always have to occur outside the clouds. Sometimes the lightning starts zapping around within the clouds. This is called "curtain discharge" or "curtain lightning". Gold conducts electricity, so when Luffy thrust that golden ball into the Raigō, the lightning all zapped through it and disappeared. But Luffy didn't really understand what it was that he did. It's all OK. Just remember, everything cleared up. And today, Skypiea is at peace.

THE SBS IS OVER!!

Retrieved from "https://onepiece.fandom.com/wiki/SBS_Volume_36?oldid=1644159"
Community content is available under CC-BY-SA unless otherwise noted.