This is the collection of SBS sections from Volume 40.

D: Hello Oda-sensei ♥ Lately my father (age 50) has been getting obsessed with the One Piece anime, and he watches it fanatically every week. It's so great that One Piece can be enjoyed by anyone, from child to adult! (By the way, my whole family loves it) P.S. Begin the SBS. P.N. Kuri

D: To Oda-sensei. You know what butt-chins are, right? What kind of chin does Franky have? P.N. Freddie

O: Oh. Yeah, it's split in three. Well, two would be a "butt-chin" so I guess three is called a "butt-butt-chin". (labels point out butts and butthairs)

D: To Oda-sensei. Hello, I am about to have my fourth child. My daughter hopes it's another girl, but if it's a boy, I intend to teach him Okama Kenpo just like Bon Kurei. Where should I take him to learn this? Please tell me. (P.N. Bon Kurei Fanclub President)

O: Ballet → Karate → Working at one of "those" places. Follow the steps in that order.

D: Hi there, Odacchi! I've wondering about something you might be able to answer for me! Since Chapter 334, Nami's been wearing the same tanktop with a 3 on it. What does it mean? P.N. Hyu

D: Hello, Oda-sensei. If you have specific colors for each main character of One Piece, please tell us what they are. P.N. Daidai

D: I have a question!! If Chopper has such a splendid blue nose that he can tell where his crewmates are at any time, what do all the members of the Straw Hat Crew smell like? Does Luffy have a rubbery smell?? Let's ask Chopper. P.N. Budomaru

O: Yes, yes. There's a 3 on it. I combined all these questions into one. Each one's number, color and smell (according to Chopper).

O: Whoa. The girls are rebelling. What are you gonna do about that, guys?! OK, leave it to me! I'll lay down the law for us all. What the hell are you talking about? I'm a goddamn shonen manga-ka! A MAN'S DREAM!! NEVER ENDS!!! (That was good)

D: Odacchi! Hello! I enjoy One Piece very much! But!! I always wonder about that trick of Robin's! "Cien Fleur" and "Seis Fleur" and all that! What language is that? Please tell ussssssss (Please?!) P.N. Pe

O: Cien = 100, Seis = 6. The numbers are Spanish. Fleur is French for "flower." And stuff like Clutch is all English. It's a big jumble, but as long as it sounds good I'm happy.

O: Look out! I barely dodged Robin's attack. Her flashback? Sounds like a lot of readers are curious. I'm drawing it now! Yes, right now!! Which means it should be in the next volume. I'll do my best.

D: Why is Franky's fuel cola? from Shuu

D: Oda teacher, how is the manga-drawing going? Well? Good. Anyways, I thought of a new attack for Luffy. It's called Gomu Gomu no Rain. What does it do? Well, he floats in the air with Gomu Gomu no Storm, then splutters a bunch of spit all over the place. How's that?Hehehehe. from Ryuta

O: THAT'S DIGUSTING!! AND IN A WAY EFFECTIVE!!

D: Oda-sensei... hey! I have a little request... On the first panel of p. 65 in Volume 26, Chopper is squeezing his hand in a fist, but! It still looks the same as it always does! Therefore! Can you show us what it looks like when he does Rock Paper Scissors?! Bye. P.N. Kachiwari-gori

O: Ahaa... the same...? You think it's the same when he makes a fist. All right, get out here Chopper!! Show 'em you can do Rock Scissors and Paper!

O: See that? Look how obviously different they... YOU CHEATED!! You did it in Human Form!! Of course that works!!

C: Fine, fine. You want me to do it with my hooves, right? (Rock, Scissors, Paper) 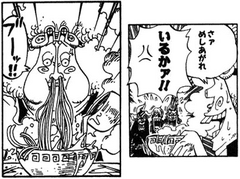 D: Odacchi, Wanze is really something. I mean, he can make noodles just by putting flour into his mouth!! But... don't you need water, too?? So instead of water... it's SALIVA? Still, it's amazing. He just shoots the noodles out of his nose, ready to eat!! BUT THEY'RE RAW!! Not cooked? Even a ramen lover like myself would not eat this. What about you, Odacchi? A little dinner? P.N. Umi

O: Yep. My dinner every night is a bowl of deeelectable Wanze Ramen! Yaaay! I mean, no!! You can't draw manga with a weak stomach. But the Wanze Ramen has earned itself a surging wave of hatred, and I think Green Gum Allergy-chan from Osaka has something to say about it too!

D: Message for Wanze!! In Chapter 368, he tells Sanji's group to "eat up" in one panel. But look at his finger! His thumb's stuck in the bowl! You can't eat that! No wonder they're all mad! You tell Wanze that. Reader Name: Green Gum Allergy

D: Does every single person in One Piece have their nails cut down to the quick?! by Basil

Retrieved from "https://onepiece.fandom.com/wiki/SBS_Volume_40?oldid=1673703"
Community content is available under CC-BY-SA unless otherwise noted.