This is the collection of SBS sections from Volume 41.

D: Heya, Oda-sensei. HNY!! & HDYD. I've got a very simple concern on my mind. Why is it that there are all these foreign editions of One Piece, and yet we never start the SBS in English...? I'll try it out. "Let's begin SBS!!" How about that? Now I can take my exams in peace! P.N. Nanpou

O: Ooh! I like the global touch. That's right, reach out and touch the world, SBS! When I try to imagine the SBS Corner being translated into other languages around the globe, I GET THE WILLIES (DONNNN)!!

D: ODA-SAN. PLEASE PUT HIM (→) IN THE SHICHIBUKAI. from Hikari-kun 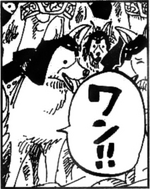 D: To Oda-sensei. The guard dog on the right in the first panel of p. 61 in Volume 40 looks like it's talking with the dog next to it. Is this true? If so, can we ask Chopper what it's saying? P.N. Right Baskerville

O: I wonder what he could be saying. Chopper!

Chopper: This is what they're saying. Left Dog: "I heard Jabra from CP9 got turned down by Gatherine the waitress." Right Dog: "OMG really? (lol)"

O: Yes, it appears EVERY LIVING THING on the island cannot get enough of this rumor. 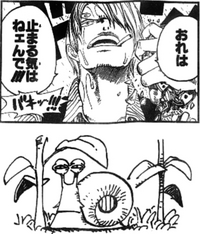 D: In Chapter 367, Sanji-kun destroys the Den Den Mushi. That's so mean!!! The Den Den Mushi didn't do anything wrong! Even a Den Den Mushi would cry if that happened to it! It cries when it hurts! It cries because its heart hurts even more than its body! So let's apologize to it, shall we? P.N. Naoko

O: Oh, well, you see... OK, I admit, I may have created that impression, but it's okay. On the right is a wild Den Den Mushi. It has the ability to communicate with its species through radio (thought) waves. Humans attach buttons and receivers to them so they can contact specific other Den Den Mushi. So, you can destroy the receiver without hurting the Den Den Mushi.

O: What? What was?! I didn't even say anything that sexual!! This is so out of the blue.

O: YOU'RE THE CULPRIT!!! It's questions like these that get me in trouble with girls like the one above!! But we all wanna know, huh! Still, cups are hard to guess. They got all that under-this and thunder-that. It makes no sense. So let's ask our female readers for the answer. Girls, what cup are Nami and Robin? (← sexual harassment)

D: Oda-sensei, I have prepared a fresh, boiling-hot oden (hodgepodge stew) for you. Take it away, Sensei!! P.N. Demomo

O: Wow! I sure love oden. It's hot? No it ain't! Watch this, I'll totally eat this kinchaku mochi in one bite! YEOWWWWWWW!!! HOT-OT-OT-HOT-HOT! YAAAHH!! YEO-EO-EOWOWOWOWWW!!! Gyaaaa!! Look!! The skin of my gums is like... falling off!! Dammit!!! ...okay. Was that the kind of joke you were expecting?

(Note: Kinchaku mochi is a type of mochi (rice cake) that is used primarily in oden.)

D: A question for Odacchi! Lately, my family has surfaced a theory that:

Are these correct? By Hachikou 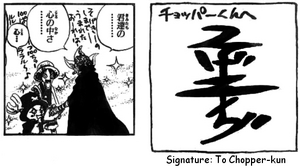 D: To Odacchi Do you think we can fly with will of spirit? P.N. Rikuzuki

O: Long ago, humans flew through the sky. Then, one time somebody said, "I'm not flying in the sky." Since then, people stopped flying. Because we lost our wings of "belief." Or whatever. Something like that. (← Hey!!)

D: What would happen if you got a haircut with Rankyaku? by Anga II

O: It'd slice your head right off and get rid of all your hair troubles forever! Or you might actually survive it. If you are one of those people, go ahead.

D: Hey, Oda-sensei!! This is kinda random, but I was just wondering what Wanze's thing (→) was used for? by Nappe

O: Those are "Pop Up Goggles"! Special ordered! He is the head cook, so of course, he uses them while cooking. It's for when he cuts the onions!! He absolutely treasures those goggles because they keep him from crying. Also, he does not use them for anything other than slicing onions!!

D: Odacchi! Here's a question for you! Crocodile can't fight water because he's "sand," right? Then how does he bathe?! Does he at all?! That's filthy!! Do you bathe, Odacchi? by Crocodile's Mother

O: First of all, let's discuss the problem of Devil Fruit users bathing themselves. People who have eaten a Devil Fruit are "hated" by the sea, and cannot swim. The "sea" here can refer to anything from rivers, pools and baths to any kind of standing water. On a worldwide level, they are all the "sea." When these people enter the water, not only can they not use their powers, they have trouble moving their bodies at all. They might be able to struggle a bit, but it wouldn't do much good. That's if their entire bodies are submerged in the "sea." With less than half the body or just the limbs, it gets easier. Also, rain and dripping water have no effect at all. Therefore, hip baths or showers are the most common choice. Now, in Crocodile's case, "water" is the weakness of his very powers, so his abilities are robbed even in the shower. But it's not like there are enemies around when you take a shower, so I'd bet he would take them even with his powers being blocked. Don't you think? ---And to answer your final question, about myself bathing. As it happens, I do bathe. Twice! In a year!

See you next volume!