This is the collection of SBS sections from Volume 42.

D: Which is faster, between Captain Kuro's "Shakushi" and CP9's "Soru"? TELL ME. by Niku-oh

O: Ah yes. I got a surprising number of questions about this one. Captain Kuro's Shakushi (introduced in Volume 5) was a pretty tough one. To answer the question, speedwise they are about the same. But when Captain Kuro uses his trick, the speed is so great that he doesn't even know who he's attacking, but CP9 has complete control of their move at the same speed. So if there were a competition, CP9 would be overwhelmingly stronger.

D: Oda-sensei, hello!! In Volume 38, you wrote "When you don't know the answer on a test, just write instrumental", so I tried that myself. But when I got the test back, it was checked wrong. Why was it checked wrong? Please tell me why. P.N. Katsufumi Four!!

O: The results are not the point. The real treasure here is your courage, for taking the first step forward. (←?)

D: Oda-sensei!! Please help me!! My dad and I and my little brother are caught in the Sogeking trap! We can't get out!! We're always singing "On the Island of Snipers♪" whenever and wherever we go!! This must be that terrible affliction. The uh, "I-must-have-Soge-King-or-I-will-die-itis"!! Quick, what's the cure?! Tell me!! Soge!! by Mega King

Sogeking: Hello there. Are you having trouble? Never fear! You will die without me? Don't worry, I'm not going anywhere! Why? Because... "The Island of Snipers" is... within your heart...

O: Okay, all done. Next question.

Sogeking: What do you mean, all done?!!

D: Oda-sensei, I have a question. In Volume 40, p. 36 (Chapter 379, "Doriki") the waitress named Gatherine-san turned down Jabra. What kind of guys DOES she like? Or does she already have a boyfriend? I can't sleep at night...It's all I think about... P.N. General Recycle

O: The idol of Enies Lobby, Gatherine has pined after one man all of this time. Her exact words when she turned down Jabra were this: "I'm sorry, but I'm in love with Lucci-san!! I mean, all a guy has is looks, right?!" The number of men who have crashed and burned before this burning love must be countless. Good luck, Jabra!

O: Here's a sudden new project! I call it "(S)onna (J)ouhou (I)rimasen" (I didn't need to know that). The SJI Corner!! This time, I'll show you the faces of "Wanze" from my sketchbook before he became the guy we all know!! 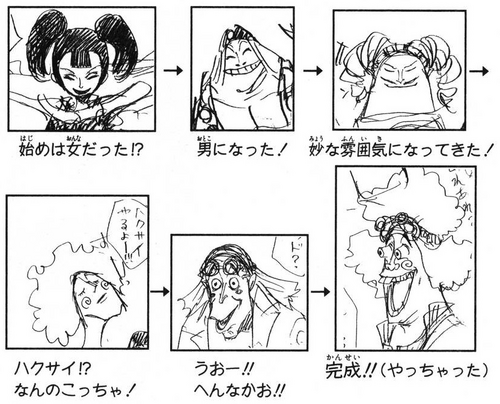 D: Don't take all the sauce, jerk!!! by Sunny-Side Up Must Have Salt

D: Hi, Oda-sensei! I have a serious question. One Piece has been going on for quite some time, hasn't it? Have you thought of the ending already? Though personally, I wouldn't mind if it continued on forever. One Piece is the BEST!!! from Mac

O: I've answered this in some magazines and interviews. Originally, my plan was that One Piece would continue for five years. I've always had the climax in my head from the start, I've just been working toward it since. But my original estimates were a bit short, and I was unable to finish up my story within five years (ROFL). And now our pirates have been adventuring for nine years, and I have no idea how much longer they will be at it (hey!).

D: O-Odacchi, what's up? Last month I bought the game "One Piece Pirates Carnival." Now, here is my question...

D: In the SBS Corner for Volume 41, you talked about Wanze's goggles, remember? In actuality, the part of onions that causes you to cry comes in through the nose, so wearing goggles will have no effect. So, be sure to let Wanze know. "When you cut onions, just push those goggles right into your nostrils, then you're all set." from Housekeeping Student, Year 1

O: Ooh, I see. What a loser! Wanze, you dork! Hey! Consider yourself warned, thanks!

D: Hello, Oda-sensei. It's nice to meet you, I've always been a One Piece fan. Now, I have a bit of a serious question. In class the other day, I learned that the word "Rob" stands for "steal". So I got curious, and after searching, learned that "Lucci" means "light" in Italian. Put them together, it's "steal the light". I thought it was fascinating, because "stealing" is a concept that runs throughout One Piece, not just in this part. So you must have named him that on purpose, right? P.N. Refect

D: I am "Sogeking-ko", a proponent of all healthy young boys everywhere! Healthy young boys of this country!! Remember the question in the SBS of Volume 41, asking about Nami-san's cup size?! According to my rotoscopic vision, Nami-san's under bust size is 65. So her regular bust size of 95 would make her an I cup!!! (donnn) That's HUGE!!! I'm a D cup... Boys... can you accept this answer??

O: Well, I must say I received a lot of answers to this question from my female readers. Thank you for your detailed and in-depth explanations. But you know, the boys aren't gonna read any of these complicated, difficult answers, so I'm just gonna report on the most common result! Nami and Robin are I cups. Wow.

O: Oooh. Here's a surprise. Thanks for reading so deeply into it. That's amazing. You are correct. It's the book that had info about the Island of Giants, Little Garden, a book that is read all around the world now, as a tome of "adventures on the Grand Line". Eyewitness tales about the unbelievable islands, people and happenings in this mysterious sea, related by fearless explorers, all so outlandish and bizarre to normal readers around the world that they were collected in a book of tall tales and given this humiliating title. If this book only exists today because the brave scholars of Ohara gave their lives to protect it 20 years ago, it fills your heart with something warm. So, are these "Brag men" truly just liars? Maybe you can tell the truth behind the stories, through the looking glass of Luffy's adventures. See you in the SBS next volume!!!