This is the collection of SBS sections from Volume 43.

D: This is your daytime news. According to an 11:00 AM CP9 meeting, a Buster Call has been ordered on mangaka Eiichiro Oda's house. All residents of the area who are NOT Eiichiro Oda, please evacuate to a safe location. P.N. Zoro's Wife

D: To Oda-sensei. Robin's "Cinco Fleur". Why does "Gorin" (Five Flowers) turn into "Cinco"? Couldn't you just say "Gorin-zaki" like the kanji do? What language is Robin's attack in? I wish you would just make all her attacks in the pattern of "_nko Fleur." P.N. Heita

O: I see... So, because "Cinco" is so easy to mistake for "Chinko" (penis) you want me to just have her attack the "Chinko" instead. Now listen here, son. This is the beautiful, regal Nico Robin we're talking about here. Chinko? I mean, that's just... BRILLIANT. Didn't I mention the language sometime earlier? Oh well, it's Spanish. This is how it works.

And that's how they count. Have you ever heard any of them before?

D: Do the names of Sodom and Gomorrah come from the cities that appear in the Old Testament of the bible? In the bible they were destroyed by God. Are they being integrated into the story by being destroyed by the great "Godly" power of the World Government? by Yoiko

D: I want to know the name of the guy who gave Usopp the rice balls in Volume 36. He was such a nice guy (cry). P.N. Nice Old Guy

O: Ahh, yes. It was a lovely gesture, wasn't it? I was thanking him as I drew it. Well, he's Happa-san, a kindly old bandit-turned-carpenter. He moved there from Pucci, the town of gourmets. He's a bachelor once-divorced, so he made those rice balls by himself. Packed inside them were the Water Seven specialty, Mizu Mizu Meat, so they must have been quite good.

D: Blows shouldn't hurt Luffy, so why does he get bruises and swelling when Nami and the others beat the crap out of him?! Tell me!!! P.N. Zororin Love

O: When the crew beats up on each other, it's always in admonishment with a strong sense of purpose, which is why it works so well!! It works on his spirit!! I bet Nami is thinking, "It's his spirit that hurts deep down!!" ...right? I guess not.

D: Oda-sama, we send you a letter and the feelings of all of France! I write you this message as the representative of a French fansite of over 1,000 members! We hope to show you, and especially the fans in Japan, that there are One Piece fans in other countries around the world!!!

Question: Oda-sensei, do you have a good french bread?? I am French, so I need a yummy french bread to begin the SBS!! And lastly,

"Que la volonté du D soit avec vous Mr Oda! (May the Will of D be with you!!)

O: Ahem. The SBS has finally reached international status. I appreciate that you took the trouble to send them all the way to the office in Japan. And this question, which you sent across borders and around the world... IS THE BEST YOU COULD COME UP WITH?! Plus, the answer is, I DON'T HAVE ANY FRENCH BREAD. Though I'd like to have some authentic french bread someday. So now that I've answered your question, the French edition is about 10 volumes behind, which means you'll get to read this translated in 2 years. I hope you're still fans by then! Thank you!!

D: Odacchi!! I've been spending sleepless nights wondering, when Kalifa, crown jewel of CP9 uses the Six Forms' "Tekkai", do her breasts still jiggle? Every time I get close to finding out, I get all bubbly... See, here come the bubbles again... blub blub... Bobajji! Boobabamb!! (Odacchi! You're the man!!) by Kathy Keisuke

O: And now we have a perverted question straight from Japan. What's that last part for?! You mean *I* have to check?! So I'm just a peeping tom now. BEY BIBBIN BIBBUH (They didn't jiggle)

D: Since the S (Set that) B (Birthday,) S (Son) Reader Corner is basically becoming a ritual now, I would like to take control of the Water Seven and CP9 Arc.

...and I assume these are fine with you? Well, keep working at it, Sensei!! by Exam Student

D: Question!! If God Enel were to descend to the Blue Sea, how much would his bounty be? Also, what would happen if he did that? Would he rule the Blue Sea? P.N. Gorozoro

O: I see. Interesting question. Knowing how tricky he would be to beat, I'd imagine he could reach as much as

500,000,000. Luffy was lucky to be rubber. But like Luffy said, there all sorts of even crazier guys down on the Blue Sea. Enel would NOT rule it. 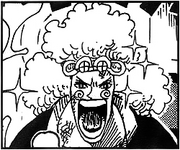 D: Whatup Occhin! Nice to meet you. (At my school, we all call you Occhin.) Now, what I want to know is, when Sanji uses the Parage shot to Parage your face, like in Volume 39 Chapter 372, how pretty will it make you? Lemme know. P.N. 34590

O: Oh, awesomely pretty. As you can see from Wanze's example above, it gives you super international movie star good looks. But there are two problems. One, Mr. Sanji don't kick the ladies. Two, he only changes your face. If you're a fatty boombah, you're just gonna look like a creep with a nice face.

D: Hey there! I feel like asking you a pointless question that I've been wondering about! A typical tankōbon will hold about 9 chapters, but sometimes One Piece has more like 10-11, right? Why is that? It seems like OP has been "thick" lately. And the content is hot! P.N. Jon

O: Yep. To get all technical now, a comic volume has at least 184 pages, which can usually be reached with 9 chapters, but in my case, sometimes I put my foot down and (selfishly) say I desire this chapter to be in yon volume! Which is why there are 10 or 11 at times. It turns into a bit of a bonus for the readers. From my end, it's just the particulars of how the story comes across. Once, when I had an 11-chapter book followed by a 9-chapter one, the readers complained about the content getting thinner. And now you know why. (*laugh*)

D: Oda-sensei, I have a question! The part about the "Klabautermann" in Volume 35 Chapter 351, was that your idea? Or does it come from something in real life? Please tell us. P.N. The Secret Face Behind the Luffy Pirates

O: There are similar legends all around the world about ship fairies, but the Klabautermann legend in particular comes from German sailors. In Japan they call it "funadama" (spirit of the ship). It's easy just to think of it as the "guardian spirit of the ship". They believed that if a Klabautermann lived on the ship, you would sail safe and sound.

D: Hello. It's funny, if you hear "Kaku-kaku" you'd think of Kaku, of course. But there's an even pointier (kaku-kaku) guy out there! Volume 35, page 131, third panel on the left, what's that full-body angled guy doing there? Who is that guy? If you don't answer me, I'll pound you as flat as he is!! P.N. Prince from Somewhere

O: There he is. Well... here's your answer!! His name is... KAKUKAKU-SAN!!! Too easy? As it happens, Kakukaku-san is very erudite (hakugaku) and loves to have long, outspoken arguments with other people (kenken gakugaku). He's also easily frightened, so when he gets scared, he starts trembling... "kakukaku"...! THAT'S WHAT HE'S LIKE!! (Not good enough?) SEE YOU IN THE SBS NEXT TIME!! (It's over?)

No SBS. Results of Character Poll 3.