View source
watch 01:32
She-Hulk Trailer Dropped - The Loop
Do you like this video?
Play Sound

This is the collection of SBS sections from Volume 44.

D: Good morning, Oda-sensei. It is my once-in-a-lifetime request for you to let him (→) start the SBS. P.N. Omatsuri-kei

D: Hello, Oda-sensei!! Poor Oda-sensei, who always get beaten to the punch by all kinds of people who want to say the SBS before him! I'm sorry. I'M ONE OF THEM. (Donnn) So let's decide who gets to go with Janken|Janken! Nice and fair! Are you ready?! First comes rock... Jan-ken-pon!! ...oh no, I lost! Oh well! START THE SBS!!! P.N. Hanayu

D: Oda-sensei, good morning!! I have a question!! CP9's clothes sure stretch a lot. How many Gomu Gomus can they stretch? P.N. Ashi

D: YOU ARE AN OKAMA, RIGHT? From Anonymous 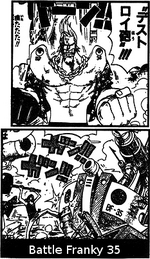 O: Yes...!! That's right. As you will know from reading Franky's flashback, Franky created his own line of 35 battleships called Battle Franky. After his ships were used to hurt someone he loved, and he used that same sense of technological wizardry to fix his own body, he carved the symbol BF-36 into himself and put an end to his career of shipbuilding. After that, he became a dismantler.

D: I've been kind of wondering for a while, what was Kumadori's mom like? from Yasuhiko

D: Sensei, I can't help but wonder what the eight members of CP9 looked like when they were kids, especially Lucci-san. Please draw them for me, if you would. Thank you. P.N. The Sea is Wide and Large 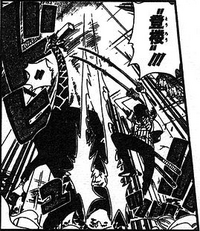 D: Hello, Odacchi. I just recently noticed something. When reading Zoro and Kaku's fight in Volume 43, there is a pattern to his attack names.

He seems really fixated on sushi... Could Zoro-san have never had sushi before?! P.N. Susshy

O: Who-ho-hoa, now, whoa... I think someone just accused you of some totally bogus crimes, Zoro-san! I think ANYONE would be upset at being the author of such a shocking display of puns in poor taste! Come on out and tell 'em it ain't so, Zoro!!

O: WHAT ARE YOU ACTING SO SHOOK UP FOR?!!

O: HE DOES!! YOU BET HE DOES!! I always stay awake so I can catch a glimpse of him, but I always fall asleep right before he comes! It's so frustrating!!

O: His parents? Well, I think you will be pleased with the next volume. Get excited! 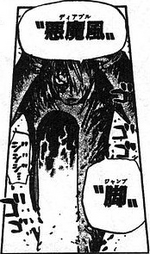 D: Odacchi, nice to meet you!! I finally sent you a postcard. It's a serious question, so give me a real answer. That trick that Sanji used to beat Jabra!! If it was that hot to Jabra, wouldn't it burn Sanji, too?!! Wouldn't Sanji be like, "yeow"?? Tell me! P.N. Oda Gayichiro

O: What are you talking about... WHAT ARE YOU TALKING ABOUT?!! Are those eyes, or holes in your head?!! What were you watching in that fight?!! His LEG is hot?! No, it's not hot!! SANJI'S HEART WAS BURNING SO MUCH HOTTER!!!

D: Sending my condolences with this card. from Naoko-chan

(Note: Ponzu is a type of Japanese sauce made with citrus fruits.)

D: Nami was ripping Kalifa's clothes off after she beat her, to look for her key. So where was it hidden, after all that? P.N. Udonko

D: Umm, I have a little question about Franky-san. He was adopted at age 10, began building the sea train at age 12, finished the Express 10 years later, and 4 years after that met with the accident from "8 years ago," which would mean... HE'S 34 YEARS OLD!! Can someone really be so nutty at that age? Before doing the calculations, I assumed he was 18 or something... P.N. Young Iceburg is so cool!!

O: Yes. So you calculated his present age. That's right, Franky is 34. Isn't that what makes him cool?! I mean, that basically means he's just a total freak and pervo.

O: No way! This is reference material! For my manga!! 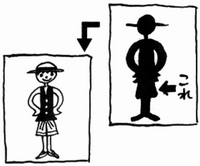 D: Hello, ODA-sensei. Your body is fine? My name is Kimeunhyang. Lately, Volume 41 has been published even in Korea. This is a sudden question, what is "this" thing between the waist and legs of the ONE PIECE logo? A skirt? Is it really a skirt? I want to know so badly, I can't sleep.

O: Thank you. This was a question from Korea. I think if I draw it out, you'll understand. Is the "hand" part what threw you off? 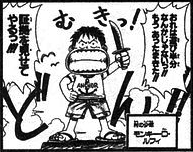 D: Hey! Odacchi!! I conducted an investigation during my very busy summer vacation. You know how you use "Don!" or "Donnn!!" a lot, as a sound effect? So I counted the number of times "Don" was used in One Piece, through Volume 42, Chapter 409! (Only counting Don, Donnn, Dodon, Dodonnn. Excluded sounds which I suspected to be gunshots or attack sounds) My unofficial count found a grand total of 1,469 DONS! (Donnn!!) On average, that makes about 3.5 Dons in every chapter. Did you know that?? Is there any other mangaka which uses "Don" so often? Come on guys, let's give him a round of applause! Clap clap clap... wow. Yes! Now that you're in a good mood, let's END THE SBS!!! (DODONNN) P.N. SYAM no M

O: Waaaaait! Let me say something first! HOW MUCH FREE TIME DO YOU HAVE?! (LOL) No really, thanks a lot. I guess that's just how many scenes I felt confident in! See you next volume!