This is the collection of SBS sections from Volume 45.

D: Oda-sensei! You haven't been able to give the title call recently, but as Polar Bear, head of the "Let Him Say the Title Call Squad", I say you have nothing to fear!! Now, go ahead and say it, while you imitate a gorilla-ish Inoki eating a banana! by Polar Bear

D: Is it true that you shoot out a "Coup de Boo" when you eat potatoes? by Modai

O: OH YES. I DO. Man, let me tell you. I accidentally ate a potato last time, and one single "Coup de Boo" sent me flying to New York. It was Coup de Booman in New York. Of course, I was able to get a potato to send me back home safely.

D: Odacchi!! Out of the Six Forms, I want "Tekkai" most of all, but just how hard does it make you? I mean, some places it's REALLY important to be HARD, you know what I mean?! P.N. Majin Moomin

O: WHAT EXACTLY DO YOU PEOPLE WANT FROM THIS SECTION?

O: That's right. That's exactly what it came from.

D: Odaaachi!! I have a question, SIR! Wait! Wait! Wait! On Volume 44, p. 148, the fifth panel, c-c-c-c-c-could that be?!!!! Ryotsu from "Kochira Katsushika-ku Kameari Koen-mae Hashutsujo"?! Ryotsu, Ryotsu! It is! Why? But why? Why there? Is it a relative? Or what? He was transferred to the army from the police? What's the story? If you don't answer me, this is sexual harassment! by The Tacchi's Boss

O: Yes. I got a whole mountain of letters about this. You are right, it is indeed Ryo-san from the ultra famous "Kochikame"! Last year, Kochikame forged the incredible streak of over 30 years in publication!! So in one issue, Jump ran a little contest in which Ryo-san appeared in all the stories in the magazine, and readers had to find him. I think the only reason they could get all the Jump authors in on such a feat is because of the immense respect and popularity Akimoto-sensei commands. Congratulations on 30 incredible years!! 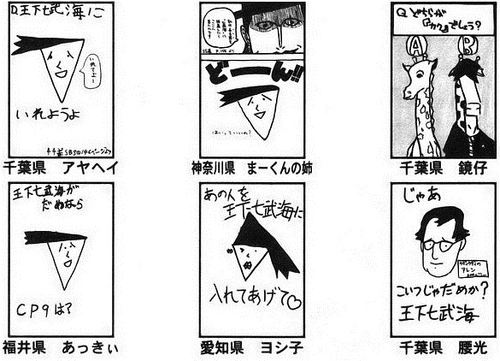 D: If Lady Robin can use her Hana Hana Powers to make any part of her body sprout somewhere else, does that mean she can do it with her ample bosom as well? "Nyurin-zaki" (Breast Sprout) Boy, I'd like to take a hit from that sometime... P.N. Ero Ero no Mi Devil Fruit User. 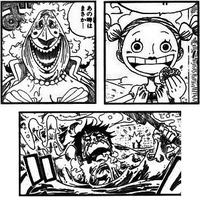 D: If Kokoro-san is a mermaid, why is her granddaughter Chimney a normal human? Don't mermaids pass on genetic information? from Petit Panda

O: Kokoro-san came here from Fish-Man Island out of her respect for Tom-san, when she was a young mermaid. She married a young human man from Water 7, their half-merman son married another human, and THEIR daughter was Chimney. Chimney is therefore 1/4 mermaid, so she's a very good swimmer. It was only her mermaid blood that helped such a little kid save Luffy in Chapter 403, Volume 42, as he drowned. 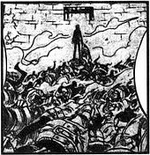 D: In Chapter 422, it said that Rob Lucci killed 500 hostages and took the captain's head. Why did he have to kill the 500 hostages? by Wiper is the Coolest!!

O: I know, why? It's terrible. Why couldn't he just kill the bad guys? However, I had to shorten some things to make the pace move quicker. Lucci is a man who believes that "weakness is a sin". Therefore, if these soldiers were weak enough to be captured and expose the country to danger, they could do the same thing again in the future. So he arrived at the answer that these weak soldiers did not have the right to live, and took action accordingly. It's a hair-raising philosophy. Thanks for beating him, Luffy!!

D: Please us tell us his name. My husband and I keep calling him "Round Guy." For now. P.N. Patty

D: Do all Devil Fruit have that swirly pattern on them?

O: That's right. It's what distinguishes them from other fruit. Sometimes I wonder if Sanji himself is a Devil Fruit.

D: In the Volume 4 SBS, you said that you read every single fanletter and postcard. Do you still do that, even now? by Koji

O: Yes, of course I do. However, to be honest, there was a time when I couldn't read them all. At that point, I was easily getting one to two thousand letters or postcards a week. At the time, I had to select a few hundred out of all of those, but lately the volume of mail has come down to a manageable level (the letters from girls have really dropped off since I got married *laugh*). So now I am once again reading all 100% of them. Looking at it now, I've been getting these letters of support week after week for 10 years, which is truly a wonderful thing. Thank you. I am truly kept afloat by my readers. There's a room in our office where we store the mail, and my staff is getting worried that the floor is going to give out in there.

D: Sorry this is so sudden, Oda-sensei. Luffy's favorite food is meat. What about everyone else on the crew? And you yourself, Oda-sensei???? Chapapapapaa! P.N. I Like Cup Ramen!!!

O: These are their favorites!!

D: Hey, Odacchi! I got a question! About Devil Fruits!! If Kaku and Kalifa said they wouldn't know what their Devil Fruit were until they ate it, how come Shanks knew what Luffy's Gomu Gomu no Mi was before he ate it?? Tell me! Tell me now!! Pleeeease tell me!!! P.N. Shirogitsunekko

O: Well, I think I'll eventually get to explaining more about Devil Fruits in the main story, but you see, there's a book of Devil Fruits. It has info about all kinds of fruit names and abilities, but few of the fruit can actually be identified by their shape. In the case of the Gomu Gomu no Mi, there was a picture and everything, but for Kaku and Kalifa, they were talking about how they wouldn't know until they had finally eaten the fruit. That was in Volume 40.