This is the collection of SBS sections from Volume 47.

D: When reading the SBS, please make sure the room is well-lit and that you are not too close to the page. When finished reading, please close your eyes and move them up, down, left and right to give them some exercise. (You too, Oda-sensei) by Tada-san

O: Aaack!! It's the usual "takeover squad"! Wait... huh? No... Oh! Now that I read closer... Such kind words. I'm sorry, I thought I was being screwed over once again! Thank you for thinking of everyone's health and well-being, Tada-san! There's plenty this volume to make up for last time, so here we go!! ST-START!! THE S-B-S...!! ( ← stuttered)

D: What should one do if Enel shot down lightning bolts? by Pacchon

O: First, guard yourself by ducking at light speed, then give him that golden right with a bit of rotation!! If you can't hit him, cover your bellybutton, cry and surrender! He's tough, folks!!

D: I have a question, Oda-sensei. What would happen if you picked your nose with Shigan? Please test out this query. by Prince

D: I always love reading One Piece, Oda-sensei. By the way, about those 200 Marine HQ captains and commanders that fought the Straw Hats in Volume 44. One of them had a Devil Fruit ability that made him become like a bunch of balls, remember? What's the name of that fruit, and what is the ability, exactly? It showed up in the anime, but I didn't hear what it was. Also, I would like you to explain the "Sabi Sabi no Mi" that showed up in the same scene. P.N. Mugi-mugi

O: Okay. Well, these abilities were all described in the fanbook called "One Piece Yellow", but for those of you who don't have it, I'll explain! There were three Devil Fruit users revealed in that battle scene. 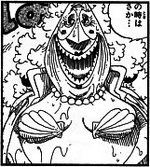 D: What are those THINGS on Kokoro-san's chest, shells? Or an evolved form of scale? A NuBra? Pen Name: I Love Grandma

O: Hmmm... ummmm... Oh!! I'm sorry, I was groaning without realizing it. This is quite a question. I suppose I can't just answer "I don't want to think about it"? All right, here's your answer. It's KIND of like a "NuBra". And you'd better believe that suction is bearing the fate of world peace! Hang in there, shell "NuBra"!!

O: I see. Well, you might want to read it closer. He says, "I'm not interested in naked HUMAN women". He can speak human words, but he's still a reindeer! Which means, he can fall in love with a human because of his mind, but he won't be aroused by her looks. He just might be smitten with a really beautiful reindeer, though.

O: Well... You answered your own question. Works for me. D: Hello, Oda-sensei! ♡ (murmur murmur (outdoor sounds)) By the way, how do you respond to the charges that the Oda Clinic performed a full plastic surgery on Koby?! (hands two mics over) We'd like to get a comment from Koby, as well. P.N. Mayuko Wakayama of the OP-Loving Saitama Citizens Group

O: He's hit his growth spurt! Haven't you ever seen a boy who comes back from summer vacation looking like a different person?! Boys grow in an instant, you know! He just tightened his muscles up a bit with some good discipline. Right, Koby?

D: Okay, so in Chapter 412, Volume 43, Nami rips Kalifa's clothes in search of the key! And like, right in front of Franky! That's sexual harassment!! Who's going to want to marry her now?! Oda-sensei!! CAN I HAVE KALIFA?! (P.N. I Would Die With Happiness If I Had a Secretary Like That)

D: Is it true that you're half-made of naughty? P.N. Travel-loving Sights

O: Yep, that's right. I guess the other half would be stupidness. It's funny, there's really no worth to me being alive, but I'm pretty sure that if aliens invaded Earth and wiped out humanity, I would still be alive and well.

D: Oda-sensei!! My brother says that the order of the manga in Jump is decided by popularity. Is that true? (by Yasumo)

O: That's a fitting suspicion for a Jump reader. Since I get these fairly often, allow me to answer. To be precise, not quite. The order is decided every week by the Jump sub-chief editor. But it's true that the most popular series are placed in the front of the magazine. Also, sometimes he decides, we're pushing THIS one this week! I guess you could say it's the "order you could enjoy the magazine in". But of course, the only TRULY correct answer is to read it in the order YOU want. 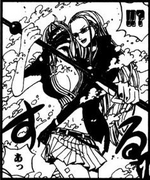 O: Kalifa creates bubbles with her body and still retains her normal body, so she's Paramecia. Rub her, and the bubbles come. Handy, isn't it? 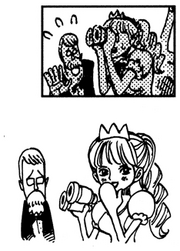 D: My question is about the rich-looking young lady with the binoculars in Chapters 436-437 from Volume 45! What exactly is she looking at?! I know Franky's a pervert, but I think SHE must be, too. I would like to know what she looks like, and what her name is. Good luck with your work! ☆☆ P.N. Gengerous Zone

O: I see... You found her. Then allow me to introduce the lady Marumieta ("I can see all"). Her manservant beside her is Yamenahare ("Now you stop that"). She is the only daughter of Bimine, the mayor of the "Gourmet Town", Pucci, which is connected to Water Seven via the Sea Express. This young woman is most ignorant of the ways of the world, and therefore quite the curious one! Having heard of the damage from the Aqua Laguna, she came here to deliver emergency supplies, and found herself witnessing the most extraordinary event!!

D: I've always wondered... Is Robin supposed to be based on ME? P.N. Nico Aya-chan

D: Wait a second!! Oda-sensei!! You know that scene in Volume 45, where Robin squeezes Franky in a very important place? CAN SHE FEEL WHAT SHE'S SQUEEZING? You simply MUST tell me!!

O: Yes, she can. All the arms and legs she sprouts are part of her body. She feels the things she touches, and when she's hurt, that damage is done to her own body. So you see... She really DID grab his balls!! Girls, NEVER DO THIS. They're very tender!!

D: What would Franky's jolly roger be? by Sen-chan

O: Well, let's see. Since every crew member seems to need their own jolly roger, how about this? (←)

D: Question for you!! Is the swordsman "Ryuma" who was once said to have defeated a dragon the very same Ryuma that starred in the short story "Monsters" from your collection volume entitled "Wanted!"? He is, isn't he? I'm so desperate to know, I can't brush my teeth. If I get a cavity, I'll tell the dentist it was your fault. P.N. Satoru-pyon

D: Greetings!! I cracked open "Wanted!" for the first time in ages and re-read "Romance Dawn", which prompted me to notice that Luffy's grandpa in that story was basically the same guy as Vice Admiral Garp! Does that mean that Garp was once the captain of a crew of pirates? P.N. Nao

O: Well, here are two questions about my old short story collection, "Wanted!" I'll tackle Ryuma's first. The zombie Ryuma appears in Chapter 450 from this volume, and he is indeed the Ryuma who starred in "Monsters". In the world of One Piece, he's now a legendary swordsman who died of sickness. I wouldn't have minded if this had just slipped through the cracks, but I was happy to see that so many people noticed. Next, Garp. He appeared as Luffy's grandpa, and a pirate no less, in the one-shot that served as the basis for One Piece. He might look the same, but I want you to see these as different stories. Grandpa Garp from THIS One Piece is a true blue Marine, from birth till death!!

D: Oda-sensei! I've always wondered, aren't the Marine salutes kind of backward? I thought you saluted with the SIDE of your hand against the forehead! Explain please! P.N. Like That

O: Oh, right. After all this time, I can't remember ever answering this one. Yes, it is a bit different than what you'd expect, but there's a reason. Sailors have pull all sorts of ropes on a sailboat to make sure it can sail, and the tar on the ropes makes their hands filthy and black. It would be rude to show those blackened hands to a superior officer, so they salute showing the back of the hand. It's the kind of courtesy you'd expect from the Marines.

D: Hello, Oda-sensei. I know you're busy watching Iitomo, but I hope you'll answer my question. What does it mean when people mention directions like 9 o'clock or 12 o'clock in your manga? P.N. **-kun Behind You

O: Well, just imagine a clock with you in the middle. 12 o'clock is right in front of you, 6 o'clock is right behind you. You just think of the ship the same way. There's no east west north south, you just use the directions you see.

(Note: Waratte Iitomo! (It's Okay to Laugh!) is a Japanese variety show)

D: Hello, Odacchi. OP started when I was in 1st grade, and has now reached its 10th anniversary. I've decided that I should step in and let you know how many panels you've drawn in 45 volumes! After a two-month investigation, I've found the result is 40,971 panels!! Round of applause! *silence* ...W-well, keep reaching for 100,000. I'll check in again when you hit 500 chapters. Bye-bye baby, shap babaloobap badap bam boom bang crash thud! P.N. Mr. 9's First Apprentice, Tatsuya