This is the collection of SBS sections from Volume 48.

D: Hello, Odacchi! I have a question; will you hear me out? ...Oh, you will? Thanks! Here goes. In the song the Straw Hats sing called "Family", they have a line that goes "We're not acquaintances, we're not friends, we're family". If the Straw Hats really were an actual family, who would be the dad, and who would be the mom? P.N. Nashi

O: "Family" has been aired on TV, and it seems to be the most popular out of all the character songs. I really love it, too. My answer would currently be something like this.

D: Tell us Flame Fist Ace's height and weight! Personally I think January 1 would be great for his birthday! What do you say?! BY. AI ❤

D: Question for Oda-sensei, chapa! Is Captain T Bone a General Zombie? Or is he just another boney man like our friend Brook? P.N. Chapapa Village Resident

O: Ooh, good question. Well, if you want to solve this by a process of elimination, he's not a Wild (animal) Zombie, and he's not a Surprise Zombie. Soldier Zombies are those without weapons, but since Captain T Bone is armed, that would mean that, as you say, he is a General Zombie. (NOTE: ACTUALLY A HUMAN.)

D: Horohorohoro... "NEGATIVE HOLLOW"!! Swiiishh... You're a little too bummed, Oda-san!! What would you like to be when you're reborn? P.N. Koby's classmate 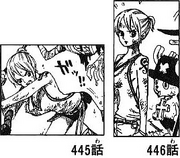 D: Oda-sensei, I realize you're very busy, but I do have a question. Nami's shorts changed between Chapters 445 and 446, in Volume 46... What happened? Thriller Bark is such a mysterious place, after all. P.N. Makigon 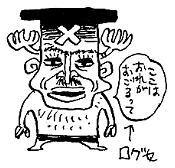 D: Odacchi. I love your manga. I have a question. What happens if Chopper eats four Rumble Balls? I've always wondered about that. Draw a picture, please. Nickname: Hama-chan

(Chopper: It's on me, I insist (catchphrase))

D: Hello, Oda-sensei!! This is the first time I've ever sent you a letter! On p. 161 of Volume 46, the chapter titled "Moria", there is a zombie with the number 767. And yet, on p. 173 of the chapter titled "The Mysterious Four of Thriller Bark", the zombie in Hogback's lab says 741. Why is that? Did you... MAKE A MISTAKE?! Give me a serious answer!! P.N. Snowdrop from the Drum Kingdom

O: You really pay attention to detail! So what you're asking is, why is the zombie just being created given a lower number? As a matter of fact, it makes perfect sense. This is because zombies get purified all the time, leaving empty numbers behind. Since zombies are constantly being lost when their shadow owners die, intruders purify them with salt, or Moria simply uses them like disposable pawns, the newer zombies must be created to fill those holes in the numbering order. So it is quite often that zombies with lower numbers are created. You also might be interested, though it's of no real consequence, to learn these specific number ranges.

The zombie army is maintained by filling in the empty ranks according to this chart.

O: It's game time! Answer's at the bottom, so no peeking!! 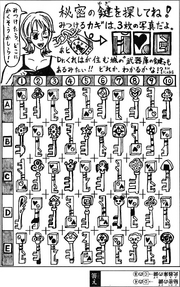 Look for the secret keys! The clues are these three photos. Also, it looks like the weapon storeroom key from Dr. Kureha's castle is here, too!! Can you tell which one it is?!

Nami: Where should I hide these once you've found them?

D: Sensei! When Absalom says "Being mean to Kumashi must fill you with ecstasy. Ecsmacy?" and "So cruel to Hogback. Cruelback." Is that just because he likes bad jokes?

O: YES. EVEN HIS SENSE OF HUMOR IS INVISIBLE!!

D: Hello, Odacchi. I'm a high school senior re-reading Volume 47. About Ab-sama's wild and cute mouthy mouth, did that belong to the lion Nami saw from the carriage in Volume 46?! Did they switch faces?! Like plastic surgery?! I guess that chin of his must have had some mental complex that kept him from getting married! Let me hear the truth from YOUR mouth, now. P.N. Failing Exam Student

O: I see, so you noticed that... I'm afraid I will keep my mouth shut, however. Yes, it is true that that lion's muzzle was transplanted to Absalom's face by Hogback. However, there's no proof that the human mouth the lion has originally came from Absalom. There might be a different zombie with the same scars. I'm keeping my mouth shut, for the few Absalom fans out there.

D: Greetings, Odacchi-sama. In one of the volumes (I forget which one), the topic of voice actors came up, and you said you'd make a list. So make that list already!! P.N. Voice

O: Yes. Voice-kun here wants to be an actor. I remember my promise. I said that I'd introduce the voice actors to you. However, in the various OP-related publications that are out, we HAVE done just that. I thought it might be redundant to do it again here, but I have a good idea! How about a special SBS-only Let's Ask the Voice Actors section?! I don't have their permission, of course. But I think it might work out! If not, I'll answer for them. First entry is the Straw Hat Pirates' actors. Write up your message or questions and address them to the person you want to ask, then send it to the SBS Usopp Gallery address listed in this book. They're good, funny people, so you can ask anything.

O: In the case of Zoan-types, a different "model" is basically a different fruit. Just like those Inu Inu no Mi examples, there's also the Ushi Ushi no Mi, Model: Bison (Dalton) and Model Giraffe (Kaku). Just think of them as entirely different fruits.

D: Excuse me!! May I pose a serious question to the typically-vulgar SBS?? In Volume 46, Usopp said that the same power doesn't exist twice. But this doesn't make sense with what you said in the Volume 45 SBS... If the Gomu Gomu no Mi was in a book of fruits, then Luffy HAD to have eaten at least the SECOND known example of the fruit! Now, most beautiful and intelligent Ei-chan, explain it all! ✩ P.N. Takafi

O: Very sharp of you. But I'm cool. I haven't made any mistakes. As a hint, let me rephrase what Usopp is saying. "The same powers don't exist twice AT THE SAME TIME". How's that? For more detail, you'll just have to wait for a certain professor to make his appearance in the story, and explain exactly what the Devil Fruits REALLY are... Eventually.

D: Oda-sensei, greetings!! I've made a sudden discovery! When you take off the dust cover of Volume 46, the person popping out of the snake looks an awful lot like the sketch of the "Unforgivable Mask" character from Color Walk 2! Just who is he, anyway? Tell me!! by Hiromu

O: Whoa!! You've gone too far! You're in danger!! They'll come for your life!! Okay, look, this is all I'm gonna say. He's Pandaman's rival!! He's been hired by Tomato Gang!! Later!! See you next volume!!