This is the collection of SBS sections from Volume 50.

O: M-Moria...? I didn't expect the guy barely clinging to his life to come running to start the SBS. By the way, the above title art was selected from the many that we received after advertising about it in Volume 49. It's been fun choosing, so I picked a bunch, and I think I'll do that in the future, too. Remember, send them to the Usopp Gallery address!

O: OKAY, FORGET IT!! You're taking up WAY too much space for the opening! I want to answer QUESTIONS, dammit!

O: Okay, time to get things back on track by answering reader questions. Now we've got nine people who want in on CP9, and seven people volunteering for the Shichibukai. Now I want all sixteen of you to GET THE HELL OUTTA HERE!!!

D: I think sailing these days is a lot better and the ships are built nicer, but what about in the olden days? Where would they flush the poop? Like, just send it to heaven, straight into the sea? P.N. Sorry for Speaking Frankly

O: Ah, yes. On sailing ships, it was normal that there would just be a hole on the deck that you would deposit waste into. The hole would run down into the water beneath the boat. There are much fewer sailboats now than there were in the past, and the ones being built today will of course have flushing toilets, the type like on airplanes that go "whoosh!" when you flush them. Imagine the Sunny has that, too. However, the dudes like to dispose of their waste in various creative ways. 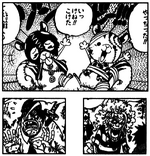 O: Yes, that's right. Those cute lil' squirrels were being moved by the shadows of some crusty, greasy men.

D: Hello, Oda-sensei! I've been thinking about Brook's birthday! Since he has the Yomi Yomi Fruit, why not use yo-mi (4-3) to make April 3 his birthday?! P.N. Lala

O: Wheee! What paradise! KNOCK IT OFF!!! Jeez, you guys!! Stop ruining the sanctity of the SBS!! Huff, huff...

D: Congratulations on bringing Brook into the crew, Oda-sensei! I'm all jelly-legged at the thought of him... like I'm boneless! So now that the crew has reached eight other members, I was hoping you could answer all the personal questions you did earlier, for all of the folks who weren't around at the time! by Getchu Inazuma

O: I see. And you listed all the questions for me, too. Thanks.

D: Oda-sensei, you always avoid the readers' "Shigans" and such by using "Soru"! Did you use to be in CP9? I'm so curious, I can't spend my allowance yet! from Female CP9 Research Group

D: In Volume 47-48, who changed Nami into the wedding dress? It wasn't that old zombie dude with the measuring tape in Chapter 458, was it? Because that would be terrible. He must have seen her naked when he was changing her outfit! What a disgusting zombie! from Ariga-san

D: Here's my question: on p. 80 of Volume 42, Sanji says "I was raised to never kick a woman." Would that have been a lesson from Zeff the Chef? Would that mean Zeff is very soft on women, as well? Tell me. from Ariga-san

O: Oops, this one's from the same person as the last one. This is a good question though, so I'll answer it. When I drew Sanji vs Kalifa (Chapter 403), some people lauded Sanji's stance, and some people felt sorry for him. The truth is, I didn't really want to write those lines. Sanji doesn't have a "policy" of not kicking women; the truth is that he actually CAN'T kick them. He is a very proud man. I think he was really frustrated at that. think Nami recognized that, and chose to praise him for once. It's a scene that I hope will resonate with male readers, but everyone's free to take it as they wish. Also, Zeff is just a man among men.

D: Hello, Odacchi. So here's a quick question. You said that when four Rumble Balls are eaten, YOU go crazy... but when five are eaten, the readers go crazy! (Just like me...) Choppaaaaaaaaar!!! P.S. Seems like all the readers in the SBS have eaten five.

O: Whoa!! Chopper looks WEIRD! Yikes! Wow, so all those people who have been sending in postcards for the SBS were eating Rumble Balls? It all makes so much sense now.

O: Right. Maybe Binks' Sake WILL come out sometime. That chant was actually fully written by the very first time Brook appeared in the story. In fact, this is a great time to explain that I went to the great anime authority Kohei Tanaka-san to write the music for me ahead of time, because when it came around to the anime, I didn't want the lyrics I wrote to mess up the guys who had to turn that song into music. I told him, "I'm going to do Thriller Bark in a year or so," and it only took what, like four or five years? Ha ha. Well, it took an hour or so, but he managed to make the lyrics from Chapter 488 (The Song of Life) match up. At first, it had a frightening sound, but by changing the performance, it became funny. Therefore, Thriller Bark owes a great debt to the incredible Kohei "Genius" Tanaka. Hope you like the anime! I was actually hoping to get the song in school textbooks, but since it had "sake" in it, I had to give up on that. I hope you all sing it, just the same. And now, END THE SBS!! See you next volume!!!