This is the collection of SBS sections from Volume 55.

D: Hello, Odacchi! I wanted to send a letter, so I sent a letter.

O: Ah! You're right. He's definitely there. That's captain T-Bone, who should have been unmistakably defeated in the Water Seven arc. As to how he survived, well, it just happened. It just happened in a manly way.

D: Don! I've gotta question! On page 110 of volume 52, when Capone's opening the gates in his stomach, isn't the "wandabadabadaba"-melody the same melody they played in the scenes when the members of "Ultraman" sailed from their machine?

O: Oh, is it? So that's what it was, huh. Yes. This is something we've received postcards about from various people, so if that's what everyone's saying, it's probably true. That is to say, when I was drawing I could clearly hear a melody in my head, and it was some kind of background music I'd heard as a kid, but - what exactly is it, I wondered as I drew. (Laugh) Incidentally, that melody is also used in volume 33 when the Groggy Monsters make their entrance.

D: Oda-sensei, I recently saw this on the news: "Power generated by cola! Bio-battery!"! When I saw that news, I naturally thought of Franky-aniki and Sunny-go! If they're making your ideas reality, so the next thing that will be realized is... what? According to you, what do you think will become real?

D: Have the CP9 ever sprained their fingers when they've failed at the Shigan? I HAVE.

O: What are you doing!?? Don't do that! It did happen to the CP9 back when they were in training, though. But please everyone, don't imitate them. Because if you do, the PTA will get mad at me!

D: Nice to meet you. Everyone in my family's into One Piece. Right, here's the real question. Luffy was sent flying to the Island of Women in volume 53. Even though it's the Island of Women, this → was there on page 101, panel 3; page 140 panel 2; page 153 panel 1 etc. Who is this guy who looks like Pandaman?

O: So you found it, huh... It's not Pandaman! Of course it isn't, since the Island of Women is forbidden to men. The answer is... it's Pandawoman-mi! [-mi is a common kanji in girl names. -N] It's said that Pandaman loves her. But it isn't known whether the feelings are mutual or not.

D: Greetings. Very pleased to meet you! We are the Panda Pirates from China. By the way, China has the largest crew~! People from all over the world have gathered in pirate crews through the Internet, and counting the registered users, we are about 40,000 people! (What's that?! Since it's China, you're not surprised? Well, well...) (Question) The buildings and landscape of the Island of Women feels a little Chinese in their character. Did you make it that way on purpose?

O:Yes, yes. The model for Amazon Lily is China. There are lots of movies and stories about Amazons, but I thought there were very few with an elegant setting. I wanted to make them a country of women with have an high cultural standard. Speaking of which, Chinese women are HOT! I love China dresses! Says Sanji. By the way, the representatives of the Internet group called the "Panda Pirates" who sent me this letter also sent me a a THICK envelope filled with messages from the members. There was a list of names, too, and there were One Piece fans from all over the world gathered together... Mmm, it made me really happy~! Please keep up your easy-going support!

O: Okay, thank you. I think even I can go and live a strong life.

D: What's the mark used by Magellan and the others in Impel Down? Is it "strength (力)"? What's this ← thing?

O:Oh, I got this question from Toei Animation too. If you look carefully at the mark on the armbands and collars of the soldiers, you'll notice that the insignia is slightly different, right? There are two different marks, but really, they share the same base. Both marks symbolize the "I" and "D" of Impel Down. They overlap like this:

D: Hello, Oda-sensei! I've been thinking about this for three days and three nights without sleeping, but - looking at your name, shouldn't your birthday would be the sixth of January? [Number-pronunciation logic: Ei-ichi-rou, where "ichi" is "one", and "ro" is the first syllable of "six".]

O: Yeah, that works. [Yes, this is a continuation of the long-running tradition of readers suggesting birthdays for characters based on their names. ...and, no, Odacchi's birthday isn't January 6. It's January 1 -N ]

D: "In Whereupon We Ask Odacchi A Question". [The letter writer is sounding like Sweet Pea, so this is my approximation of how Sweet Pea would sound like in English. It goes on through the letter. -N] Inside Sunny-go, there's a splendid bookshelf, isn't there? And in that bookshelf are "everyone except Luffy's books"! But! There's one person in the crew that I simply cannot imagine reading. And that is... Zoro. What sort of books could he possibly be reading? Please tell me!

O: It certainly does seem like books don't suit Zoro very well. But rather than reading books, you could say that he views them. Diagrams from books on martial arts, illustrations of weapons, collections of high-level bounties and so on. He looks at them.

D: Odacchi! Congratulations! They're doing another One Piece movie. But this time, it's your script, right? I'm really looking forward to it!! ...and, when I was watching the movie trailer on my computer I heard the word "Kinjishi" come up - but isn't that the flying pirate who broke out of jail 20 years ago that Sengoku mentioned in chapter 530!? There has to be some connection, right!?

O: Yes. "Kinjishi". Actually, I really wanted to have his name come up in the scene where Shirohige talks to Shanks in volume 45. But I thought at the draft level that I was handing out too much information and confusing the readers, so I took it away - but in my mind, I have determined that he is one of the legendary pirates who played a big part during Roger's time. Though I didn't think I'd make a movie about him. In any case, "Kinjishi" escaped from Impel Down, and now that 20 years have passed, he's finally starting to make a move, and that's what the movie is about. There's an announcement on page 192.

D: Would you like to be whipped by Sadi-chan together with me? Shimizu Chagero

O: What are you saying!!!? You bastard, are you back? A 21-year-old from Aichi! Excuse me, officer, this kid is a pervert. Nono, not me!! Eh? Why aren't you wearing panties?

D: When Oars fell down and the bridge was destroyed in volume 48, Franky repaired the bridge, but where does Franky keep his hammer (and stuff)? Please ask Franky!

O: Inside your briefs, right?

It's the fourth seiyuu-SBS! The forth seiyuu! Let's start right away! This guy is really popular. Even though he's got real skills, and a long history as an actor, you can hardly understand it, because he acts so young - it's the master of Brave Sniper Usopp's Voice! He's actually a marvelous person in the world of voice acting - Yamaguchi Kappei-san in the house!!

K: Not a liar! A dramatizer!

O: Alright, fine. So, do you know what SBS stands for?

K: Of course. (S)Feel free to take (B)Us in your staff as we're (S)Unemployed right now!

K: That's horrible! We have no appearances now that we reached the Separation arc in the Anime

O: You're busy anyway, aren't you! And that's not the meaning of SBS!

O: Do I look like a pub? Never mind. You don't want to get it right anyway. So, let's do this!

K: I'll work hard to defeat you with stupidity!! YEAH!

O: You're working hard in the wrong way!

D: I have a question for Yamaguchi Kappei-san. Please tell me what other seiyuus you really respect! And seriously, please. ♥

K: I'll answer seriously. Everyone of the Straw Hats. And, and Nozawa Masako-san and Master Kimotsuki Kaneta.

D: Is there any line in the script so far that Usopp (Yamaguchi Kappei-san) has really struggled with?

K: Indeed there is. "I'm a Nikyuu-human with the NikyuNikyu no mi" [Bartholomew Kuma's Devil Fruit. Literaly "meatball"] was difficult to say~ (distant eyes) ---It's not even my own line!!!

D: Would you care to show me your panties?

D: Hasn't Kappei-kun of the Yamaguchi family been a bit strange lately?

D: When Usopp and Luffy had their big fight at Water Seven, did you really have a battle with Tanaka-san?

K: Well, we "pursue reality", so. The two of us had a fight like Master Ikeno Medaka~. (Okinawa style)

D: A direct question! What's the difference between a girl and a woman? And which one do you like best?

K: Of course I... Think I can answer that in a boy's magazine? >_< I like both. because I'm a man I support the male side and I like girls Because I'm an adult. Heh. ♥

D: I have a question! Which one is your type, Nami or Robin?

D: Yamaguchi-san, hello! Please let me ask a question right away! What is the biggest lie you have ever told? 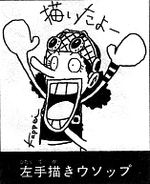 [The reader here wrote in under the pen name of "Jump Festa 2009 was fun!", and - yes. This was something that happened during the December Jump Festa last year. It's described somewhere in here. Kappei did mess up Nakai's name when they were writing them on balls of some kind for a game they were doing on the small stage. I love a good running gag. And it only gets funnier when it's at Nakai's expense.]

D: Kappei-san!! Turn your back to us, and then turn around while chewing your right thumbnail...Sexy Pose! ♥

K: I took a picture, but it was too sexy, So the cameraman and the camera all turned to stone! "Mello-Mello-Mellow"~!

D: Hello! I have a question for Yamaguchi Kappei-san who plays the role of Usopp! Which is the most important of these "hons"[It means "book", but it's also the second kanji in "Nihon"=Japan -S]?

D: For a voice actor with a distinct natural voice, are you easily recognized in private? I think you would be (especially by people who know you), but does it really happen that you're recognized?

K: Yeah. When I want to be recognized, I'm not.

K: and when I don't want to be recognized, I am.

K: It's one of the mysteries of the human world.

O: Wah! What are you doing? It stinks... Well, Kappei-san, we're going to end here! But first, there's one final kid who wants to challenge you. Please stand tall and lend him your chest!