This is the collection of SBS sections from Volume 61.

D: I really, really want to be Inazuma. -by a 31-yr old housewife

D: Odacchi~ a question for you. Is the 3rd division commander of the Whitebeard pirates, Diamond Jozu's penis a diamond? Please tell me. Pen Name Family jewel Negio

D: Question 1: Since it all seems to be becoming dirty, SBS will end. P.N. PATAN

O: NO DON'T!!! (shock) Whaddya mean dirty! Look at the question above! OF COURSE THINGS GET DIRTY HERE! HOW AM I SUPPOSED TO ANSWER!! Ah, I see you wrote me another question, Mr. P.N. PATAN...

D: If Sanji becomes the president, what would his politics be? P.N. Kenichi (Aichi area)

O: Yes, let's see-. First would be "ladies first". He'd make the whole political organization be composed of beautiful women. There would be a law that only ladies can eat good food, in movie theaters, the # of ladies' days would increase to 6 days a week, there would be total discrimination toward men, and the men would form a rebellion, and he would fail, losing his position.

D: Hello Oda sensei. No matter how many times I look at Volume 57's cover, I don't see the 8th division commander Namur. Did something happen to him?! Give him a chance in the SBS! P.N.Jozu

O: Ah-, that's true-. But in reality, I did draw him. Looks like he got cut off because of a printing problem. In the original I drew, he's right here-. Sometime in the future, I'll make sure he is on the color walks, etc. My apologies, commander Namur!

D: If you take away the cuteness from Chopper, what would happen?! Please attempt to draw him!! Ah, and what do your curtains smell like, Mr. Oda?  --Our Curtains Stink.

(Chopper is saying "Idiot, how can I by munchin' on sweets. Where's the beer, eh? The beer" and in the speech bubble, it says "Hey, your curtains smell like crap...")

D: You know the coat that all those commissioned Marine officers wear on their backs? The one that says "Justice". That thing never falls of no matter how much the guy wearing it moves, but how does it stay on? A snap stopper? Or maybe super glue? My husband says "it's rubber" (making it a circle and passing it through another circle). P.N. Koteni-

O: Too bad, nothing is on there. That is a coat that has "Justice" on the back. It never falls off, because to them, Justice never "falls"!! As long as that feeling stays in their hearts, THE COAT WILL NEVER FALL!!!

D: Greetings, Odacchi sensei. Good afternoon(?). This is a question, but the marks on the hat Portgas D. Ace was wearing; do they mean: 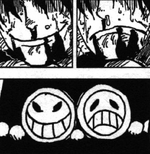 ☹: Was it okay for me to be born into this world?

☺: Meeting Pops, Luffy, and loving me so much, I'm glad I was born. Thanks.

...or something like that to indicate Ace's question and the "Answer" he found? No, it's gotta be that! When Ace said his quotes before dying, his expressions were the same as his hat. P.N. Nara's K(Kuuki) Y(Yomeru) (Can read atmosphere)

O: Hmm, I see. I've received quite a number of postcards on this one. Those "marks" and "the last expressions", hm. They are the same. I, also, was shocked when I had this pointed out at first. (Haha) What's funny is that much to coincidence, that happened to become true. Back then, when Ace made his first introduction, there was sort of an idea of what this dude's destiny would be inside me, but those marks were just plain old accessories, and so I never thought of a deep meaning. And the expressions of Ace when he was dying, well I just thought that would be relevant and drew those two panels next to each other. Realistically, the face of pain, burning, hurting, feeling bad, and not wanting to die. Still, the feeling of having no regrets. He probably tries to tell that is how he truly feels to Luffy. And that's what his smile is. When a person cradles a crying baby, he/she always smiles, right? Same as that. Because he wants the person to smile, he dies with a peaceful smile in the end, and I think that shows us his kindness. Thinking that, I drew those panels. Ah- the explaination got kinda long-. Well anyhow- it's amazing, how you all notice this stuff.

D: Tell me why do conveyer-belt sushi restaurants have to rotate the sushi around. P.N. Marukoh the Phoenix

O: Oh, I think it's the same as the rotation of the ages.

D: Dear Odacchi, ah, just because I wrote in english doesn't mean I'm a foreigner, just in case. By the way, when I was watching TV, they were talking about this place called the "BERMUDA TRIANGLE". Could it be that the "Florian Triangle" was taken from here? from Below Street

O: Well, obviously, yes. Is this too vague? The Bermuda Triangle is a place that actually exists in the North Atlantic known as the "Zone of Demonic Triangle". I'm not sure about now, but in the past, it was said that every year about 100 or more vessels suddenly disappeared in the scary area. Since the mystery is still unsolved, I'm guess there probably still are many accidents. As for the reasons, there's stuff like electrical problems or methane gas myths and so on forever, so interested people can look it up. There are lots of ghost ship witness stories too.

D: It automatically came to me when I watched the movie "STRONG WORLD". Why there was one place in the dangerous island of Rusukaina that was completely safe. The tree in the background is the critical point, correct? Still, the tree in the movie called Daft Green is probably not the exact same

species, so YOU ARE ALLOWED TO explain to the core here, you know? P.N. TAKAAKI . T

O: As you have noticed. I figured it wasn't worth explaining because I didn't have enough pages anyway and skipped it all, but when I made the movie storyline, I presented the tree called Daft Green. This is a tree that emits an odor that animals dislike (poison), which explains why they never approach this tree, and so I used it here too. Still, the species is not exactly the same and the setting is "same shape; no poison emitted".

D: Hello Odacchi, I figured out the tank top you were talking about in Volume 60 about Chapter 589♪ It's

"Bound". It's "Dog" and "ND" for Bound. I also love the Odacchi that forgets things he wrote himself. P.N. Burdock (* Dogs say "Bau!" instead of "Bark" in Japan, and Bau sounds like Bou.)

D: ODACCHI, TELL US YOUR FEELINGS (WILL) AS OF NOW IN 3 LETTERS!! Pen name, Monkey D. Emi

O: IDK (*Note he is answering at the same time by using 3 letters.)

D: My chest is hurting, and my stomach feels like it's about to puke, but is this the rumored "Haki"?

D: There's something that ReAaaaaLy bothered me so I took a pen for the first time! And so, the

question is Sanji's *BAM*! 2 years later.... IT'S JUST PLAIN OUT THERE!!! And why hide the *GGGGG*?? Please chouse out of my speculations below!

O: I apologize. I couldn't really hear because of the construction nearby, but Sanji hasn't changed at all, has he? From 2 years ago.. ah! Oh, the goatee, right? Looks like he let his goatee grow. It looks pretty wild and pirate-like and I like it a lot. What else.. he has always hidden an eye and... curled his brows.. didn't say anything new to Luffy and the co. when they were reunited... Nothing has changed! If I have to chose, I guess ① if you found anything.

And now from page 182, the seiyu SBS! I will return in the next volume!

Man~~ so quick, it's already the eighth guy. Now for the loud guy to make an appearance. How do I put this, seems like I always used to like strange things, and in private, the actual guy to call me to have some fun was this guy who wasn't even one of my regulars. This weirdo dude that was apparently an idol voice actor!! All of ONE PIECE's weird characters are by him! Jango, Mr. 2 Bon Kurei, and FRANKY'S VOICE'S OWNER!! MR. KAZUKI YAO!! in the house!!

Y: Hello this is a full-body snake man. I am a snake man from head to toe. Each evening, at the harbor building, I take a bottle of Tequila and (*BEEEEEEEEPPPPP~~!!!!!*) and drink it.

Y: Even if I look like this, I'm actually pretty sensible.

O: SENSIBLE MY FOOT!! (Shock) Now, let's quickly move on. Well if you're sensible, do you know this? What does "SBS" stand for, Mr. Yao?

O: SHADDAP!! WHOSE FAULT IS THIS!! ...ah, excuse me... now then, there are lots of postcards waiting, so please do the SBS.

O: YOU'RE GONNA DRINK WHILE DOING IT~~!? 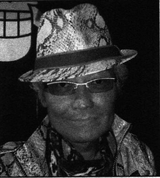 D: This is a question to the voice actor, Mr. Kazuki Yao. IS THIS WEEK'S MR. YAO SUPER? by Shining butter

D: Mr. Yao, after you glug down a bottle of cola, what sound comes out of your throat? (P.N. Beads Maniac)

Y: RIGHT AT THE SPOT, A SCREAM OF MAH SOUL.

D: After pushing Northwards throughout the Japanese Islands, does Hurricane Franky change to *a metamorphic low pressure? P.N. Patchon III

(A metamorphic low pressure is called a hentai-teikiatsu, which is a pun with "low pressure pervert".)

Y: No, it stays at 1000 hectopascals, takes a lap around the earth, and then EVOLUTES INTO A SUPER-PERVERT.

D: Franky, Bon-chan, and Jango; which character most resembles you ⌒□⌒ ? P.N.Kagakko no tokko

Y: Hmm, everyone sorta resembles me--. I always wear sunglasses and stuff, and I love Okama-chans, and at home I'm always in just my underpants so...

D: Hello Mr. Yao! You've always been on the enemy side, but when you found out you wher doing Franky's voice, what did you think? P.N. Tarao

D: Right now in ONE PIECE anime, I think you have done many characters other than Franky such as Jango and Mr. 2, but honestly, which role do you think was the most exiting and fun? P.N. Tamitami

D: RIGHT OFF THE BAT, DO YOU LIKE PEOPLE YOUNGER THAN YOU? To go even farther, how young can you go up to? I'm looking forward to an answer like bro! P.N. -Kun

Y: I enjoy both younger or older. The range around Mana Ashida chan for younger to about Fune san from Sazae san's voice actor, Miyoko Asou chan for older is OK for me. BUT, now the one right smack in the middle for me is Mirai Shida chan!!

D: This is a question, but how exactly do you say Franky's phrase 「SUPER-!」? I often try to copy it with my friend but we can't seem to do it right. (Hehe) It sorta just turns into a normal "Su-pa-". Please give me a tip♡ BY Holmes☆III

Y: Breathe deeply, suck in the all the world's evil spirit, filter it in your body, turn that into power, and loudly ejecting the word "SUPERRRRRR!" would be good.

D: Franky seems to prefer perverted fashion, but does that go for Yao-san too? If it does, take this-!! "Gift of Swim Briefs Galore-!!" Feel free; don't hesitate! P.N. Tonbanshingi♡Chopper

Y: I LOVE IT. I'll be waiting for the Lots of speedos present-. (Miniskirts would be good too!)

D: What kind of character's seiyu are you targeting next? from S akira kazumi

Y: Next would be either a cool and quiet handsome type, or a midget chief.

D: IF IT'S OKAY, PLEASE TELL ME YOUR FRANKY-LIKE MISTAKES OF WHEN YOU WERE YOUNG. P.N. Carp