This is the collection of SBS sections from Volume 64.

O: Hello everybody, greetings from me. Man--... It's starting to get really hot, don't you think? It's almost summer I see--. (It's actually winter) Hmm- when it's summer, you really start craving for it. You know, Chinese Food. Oh? I see a very summerish item right over there. It finally started this year too; A CHILLIN' SBS. Heeeeey!! (shock)

*translator's note: The chinese food part is a pun between hot chinese food you would usually eat in the winter, and "hiyashi chuka", which are cold chinese noodles that are considered a symbol of summer (or summerish item). "Chillin' SBS" refers to the joke he uses, since in Japan, people call corny jokes "cold jokes". Also, the words he uses (hiyashi SBS) is yet another pun since this overlaps with the "hiyashi chuka" mentioned above. Finally, this may be a triple pun since winter is cold.

D: If you woke up in the morning to find that your left hand turned into something like "Crab-Hand" Gyro, what would you do? If it were me, I guess I'd boil it. P.N. Maeda

O: YOU'RE GONNA EAT IT?! (SHOCK) No matter what, it's still your hand, you know?! Oh, but if you're gonna eat it, then I'll help you eat that arm with you. Yup, I won't eat my own hand. Just yours is good.

D: Question! About Megalo-chan, his model... rather, where his name came from; is he named after a large shark called "Megalodon" that was thought to have existed way back when? I also heard that they may still exist? P.N. Miha

O: Yes. Right on spot. Megalodon indeed. They are said to be the ancestors of the Great White Shark, and when a fossil of it's tooth that was found, its estimated size was about 13m~20m or so. Well, it probably was a horrifying monster. I am drawing Megalo as this "Megalodon".

Yes. Weeell about my justice, just the bored people can think about that please. I'm a Takashi fan for some reason. Akainu's justice can be taken from his actions of burning Robin's homeland, Ohara, down completely in order to demolish all evil. At this time, Aokiji used to have a board that said "Blazing Justice", but after thinking about it for so long, his thoughts and will all came to a settle on "Lazy Justice". In these past two years, there was this big "happening" that occurred among the Marines. I want to draw that happening so bad I'm getting flutterflies. Please enjoy it in the canon sometime in the future.

What do you think. P.N. Eraser Gomu Gomu no~ Stamp

O: Oh yeahhh. These two were the only supernovas without birthdays, right? Hmmmmmmmmmmmm~~.... (←pretending to think) Sure.

D: I'm probably really slow, but I still do not really understand how the bounty hunting process works well. If you kill a bounty head, then you get money from the marines, right? Doesn't the pirate who came to sell the bounty head get caught by the marines too? P.N. Sakimaru

O: Yup, the pirate gets caught. So even if a pirate kills another, he won't get the money. What he obtains is "Evil Fame".

*translator's note: Usopp says "No just stretch it out normally!!" in the image above.

D: The staring face all ladies on the face of earth after reading Odacchi's SBS. Even the cutest chicks will turn into this head and face. Stay strong! P.N. Yuki

D: A question for (Oda)chinchin!! What are the insides of Vice Admiral Strawberry's head? P.N. Mami

O: Yes. Ehhhem. First off, let's stop calling people a penis so lightly. Ouch! The eyes of the girls sting! Vice Admiral Strawberry has appeared on several occasions such as the buster call in Enies Lobby and the Whitebeard war, as I recall, but on those occasions he has been wearing a hat, I believe. Although we would think "Oh what a long hat", in the recent flashback of Fish-Man Island, it was shown how the bandages on his head twisted up to the top. In other words, yes. Strawberry is a person with a long head. It isn't his hair that is long. A "long-headed human" with a lo~ng skull is the correct answer. He is very good at headbutts.

D: Is it true that if you tickle Ikaros Much in the armpits, he'd get tickled 4x a normal person? P.N. Mami

O: Ahahahahyahyahyahyahiiiahahahaha it tickles me just by thinking of it. 8 armpits. 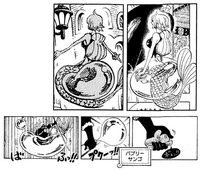 D: Hello Oda Sensei. Question all of the sudden. In some spots during the story, there are mermen that have this round thing on them that seems to be something like a float(?), but what in the world are these? And why do they wear them? Please tell us. P.N. Usoppii

O: Yes. This is obviously a bubble. The same as the ones on Sabaody Archipelago. Since it is hard for mermen to walk on feet, so they float on top of a bubble, wave their tails, and move as if swimming. It seems there are many ways of using them such as sitting or sticking things inside. The mermen always have this item called the bubbly coral, which the bubbles come out of.

O: Ehhh...--- And I want to hug the mermaids on top of those bubbles. MORON!! (SHOCK) That was just unnecessary!! (sweat)

O: Ho- hum. You surprised me. You really like manga, don't you? Indeed. There are people who make their characters talk with their mouths shut. I can't do that. It makes me sick drawing like that. We just automatically think it's weird when the mouth isn't open when talking. I think it just depends on people's opinions. The artists that make the characters talk with their mouths closed probably want their characters to look cool and posy no matter what, in my opinion. Probably. "As long as we get it, I don't care if it's sloppy", "If it's incomprehensible, then there's no point in drawing it"; These are the thoughts the mangakas put towards their "art". All artists have their own styles. 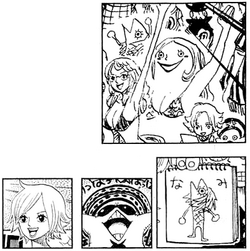 D: Heeeeey hey hey hey hey hey hey hey hey hey hey hey Odacchi my boy, Odacchi that came flying from some random place. I have something I want to ask. In Volume 63 chapter 626 "The Three Neptune Brothers", the scene where Otohime cries to the floor about the signatures. There's this dude that looks identical to the Nami mermaid Luffy drew in Volume 8 chapter 69 "Arlong Park"!!! What the heck is that creature. Tell me or else, uh... ummmm... what should I do? P.N. King of the Land of Gedatsu

O: Lots came. Postcards concerning this topic. Amazing how you find this stuff. And, Luffy's imaginary "mermaid" happend to be real~.

D: Oda sensei... YOU'RE JUST NOT MY TYPE. P.N. Match and Takeshi

D: Odacchi!! It is my first letter to you. A very serious question. In Chapter 598, they say Soul King's "TD sales are at the top..." but what is TD? Something like the CDs in this world? I'm curious. P.N. Toru-man

O: Yes. Yes indeed. Please think that way. The world has changed much in two years, and obviously technology has improved. TD stands for "Tone Dial". The shell that records and saves sound. The people have succeeded in obtaining and improving this. They are sold in pairs, and along with headphones and stereos, it is possible to enjoy music.

*translator's note: image above says "the pair of TDs" 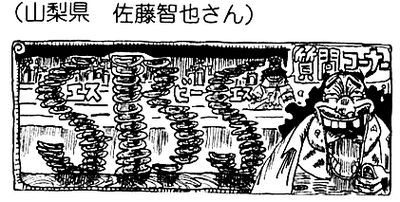 D: Greetings, sensei. I already have a question for you. Please draw the supernovas when they were kids. P.N. XDrakeFan 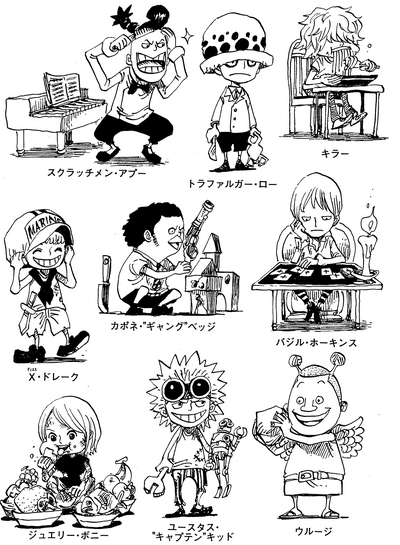 It is number 9. Sorry to keep you waiting!! This is the final "voice actor SBS"! Now then, the person we have here today is a super celebrity of a certain time period. Long ago, the loved one who used to be in an NHK channel called "Tanken Boku no Machi" (Adventure in my town). And now, NHK yet again, he acts out "WanWan"'s voice in the channel "Inai inai ba!" (Peek a boo!) and also makes the sound effects on his own; a very rare talent holding voice actor!! Let's give him a call! THE OWNER OF BROOK'S VOICE!! MR. CHO!! in the house!!

O: Woah woah, crying all the sudden right after making an entrance. See how I advertised your NHK channel just now as an apology? So wipe your tears Mr. Cho. Ah, yes, I have some candy so...

O: Ehhh?! Wait, please! I know it's an important daily activity, but could you...

O: YOU'RE OKAY WITH IT?!! (SHOCK) Ehhh so then before you start jogging away again, do you know what "SBS" means?

O: YOU GUYS ALL HAVE ZERO WILL TO DO THIS!! Dammit! This is the finally the end of doing SBS with these free people!! (←the person who suffers) Here Mr. Cho, these are the postcards!

D: WHERE DID CHO SAN GET HIS NAME FROM? P.N. Captain Nobuo

D: I heard that Cho san runs 10km every morning, but do you have advice for health or anything of that nature? P.N. Cho san's name becomes "Mister" when you change "ru" to "o"...

C: SUNLIGHT. Whatever the case, Mr. Sun is AMAZING!!

D: Question for you. During the years of having the career of being Brook's voice actor, is there a time you really felt grateful for this role? This is a serious question. P.N. loveBrook

​C: A highschool female said "Ehhhh??! Seriously?!! Kyaaaaaaaaaaaa!!!" When she saw me. But she may have been rejecting me instead...

D: Cho san! I've loved you ever since back in third grade of elementary school♡♡please marry me!! Ah! But I have a husband already! (shock) Ah! I have 2 kids too!! (shock) Ok well then can you show me YOUR PANTIES AT LEAST? P.N.Tanken watashi no machi

D: Yohohoho♪ Mr. Cho, is your work for realism to look at the voice actresses' panties?? P.N. Nyonko

D: What color would you like Ms. Yuriko Yamaguchi (Robin's voice)'s panties to be today? P.N. T

D: Mr. Cho, didn't you feel a gust of irritation being skipped in the SBS two times in a row? Smash those feelings towards Oda~~!! That's the easiest way. Open Oda's mouth during his sleep. Place some poo in there. Now you RUN. P.N. Ayaman fish-man

C: Um, I, don't poo, SINCE I'M AN IDOL. AKB doesn't either, right? Not even Momoe Yamaguchi right? And Haruka Ayase? And Jang Geun-suk?

D: If you were to think of a new move for brook, what would it be? P.N. Red beard

D: Mr. Cho, you're that Mr. Cho from "Tanken boku no machi" right?! I loved that show so much I can still sing the theme!!! In my memory, I remember how you would easily jot down a map of your adventures, at the end of the show... To that amazing artist Mr. Cho, I would like you to draw the ONE PIECE characters. P.N.Kupante

C: Lift your legs and shake yo ass and panties--♪ Panties--♫ Show~ me~ without~ any~ breaks~~♫