This is the collection of SBS sections from Volume 66.

D: Greetings to Oda-sensei and readers. I happen to be a PSYCHIC. I will now accurately guess what Oda-sensei wants to say at the moment. "I WILL START THE SBS." Take that. Aren't I amazing. P.N.M.MINORI

O: STOPPIIIIT---!! (SHOCK) What the hell are these questions, right from the beginning. YES TO ALL OF THEM, DAMMIT!!! (Vein pop, huffing)

D: Odacchi Odacchi, when will the hugging pillow of New World Nami come out in stores? P.N. Captain Nobuo

O: LIKE I'D KNOW--!! (SHOCK) I keep telling you guys, it's not like I'm involved in the producing of merchandise or that I watch over all the ONE PIECE goods that are produced! Oh, but speaking of merchandise, I'd like Franky's arms. You could wear them and grab people's heads for fun and stuff. It'd even makes sounds. What do you say, Mr. Bandai.

D: Why is Oda-sensei's avatar a "fish"? Since it's Oda-sensei we're talking about here, it must have this... deep and wonderful meaning to it! P.N. Emi@3!04

D: If you turned a kraken into takoyaki, how many servings would you be able to make out of him? P.N. Hunting Pirate Crew 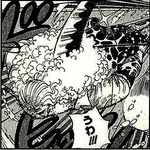 D: Oda-sensei!! Greetings. During the move "Kirisame", Hody's back fin transformed into a sharp edge. Are the back fins of fish-men detachable? Are they trade-able? Or did he just stab the weapon fin onto his back next to his real fin?? Please tell me!! P.N. Meow

O: That, my friend, is a weapon that you can slide onto the fin.

D: HELLODACCI----- phew-- how's dat. I, who loves ONE PIECE no matter how busy I am, have searched. (Might not be all that's there) ☆ Are these, like, the fish-men's feeling/mood at the moment version t-shirts?! P.N. Horo Horo

O: Woah--. You found a lot--. I'm impressed~! T-shirts that don't make sense once the situation changes. Very inefficient. Seems like in Fish-Man Island, the Aloha style is most common and Criminal Brand's Situation Explanation t-shirts are currently popular.

O: Yes. It's true-. After volume 65 came out, we now know that when Chopper uses a Rumble Ball, he can fight in his Monster Point form. ---and so, there's no way he needs one to transform into the other forms! What does this mean... answer for him!! Mr. "P.N. Running is First Class Cowardice"!!

D: In chapter 605 of volume 62, Chopper eats a Rumble Ball-like substance before transforming into his "Guard Point", but for Chopper who has grown over the last 2 years, he shouldn't have needed a real Rumble Ball. Of course I realized that that was the now-popular Rumble Ball candy, but most readers probably mistook this for the real deal!! Geez Chopper, you took such a misleading action...!! P.N. Running is First Class Cowardice

O: Yeah, I know right!! Silly Chopper! Really, for heaven's sake--. Thanks to you, there were lots and lots of my readers pointing that block out to me. Don't be eating candy in the middle of the abyss! You silly boy! ..mmhm, so with that said, let's list all the 7 new revealed forms of Mr. Chopper altogether!

D: Odacchi sensei~~!! You said that nNami-SwaN was an I cup before,... In the "New World", I suspect that has changed? What is her cup size?? Please, oh please tell me! P.N. ♡Rico♡Emi♡Nanami♡

O: Goodness, this question keeps popping up ever since the Straw Hat entrance of the New World. I think it's about time I've got to wrap this case up. Let's call for him! Sa-nji~!

S: You called? You need my bust scope again? You guys! Fine! I'll take a look for you! Nami-san and Robin-chan's... BUBAAAAAAAGHHHH♡

D: The "piece of Kuuigosu" from chapter 653. I recognize that when you read it backwards, you get "Sugoiuku" → "Floats Unbelievably". (sparkle) Then, I suddenly remembered about the "piece of wood that floats unbelievably" that made devil fruit user Mr. 3 float in the water after being K.O.ed in the Alabasta Arc; could it be that you were talking about this back then?! Well?! P.N. Daicha

O: Uh-huh. So you realized? I knew it! In the SBS of volume 25, I gave a blunt explanation of fruit user Mr. 3 floating on water, and yes. What I meant back then was PRECISELY THIS!!Back then you know? You guys all probably thought I said something random only to avoid the moment of silence, right? Uh, wrong. I've already tho.. thought of this scenario from uh.. way back then, hehe... N, no... really! (sweat)

D: My Mother told me that the reason why most women in OP are very voluptuous and the men all have a well-built body with a defined 6-pack is because you tremendously wish to become like them in your dreams, but is this really true? P.N. I love Maruko!!

D: Hello Oda-sensei! In volume 62 when Sanji meets the mermaids and blows a shower of nosebleed, Chopper was saying his blood type was "S", but that sounds really different! What are the other blood types? If it's okay with you, I'd like to know the blood types of all the Straw Hats! P.N. Bepo

...so that's it. To be clear, the types include F, S, X, and XF. However in this world, the way people call blood types hasn't been united yet so there seems to be places where they use A, B, or C instead. 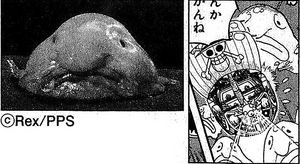 O: Yes. You are correct. It's this guy. But that does not necessarily mean I look up crazy shit like that. Although I do look up crazier things. This fellow is known as the blobfish, and you can pretty much always find him in books about deep-sea fish. He's quite unique, after all. Of course, they aren't as huge as ships as shown in my works. It is a type of deep-sea fish around 60 cm that actually exists. The fish that Luffy eats with Mayonnaise in chapter 654 is also this guy. 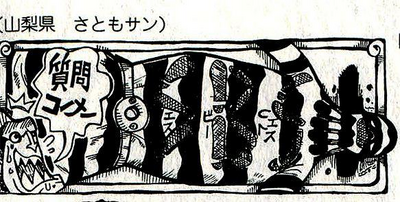 D: So recently you've been doing a lot of drawings of characters as children, so I thought why not ask for one of child-Perona. So, pardon me, but would you be so kind as to draw Perona as a child? (Absalom, Cindry, and Hogback, too) P.N. Witch Princess Eustass Luna 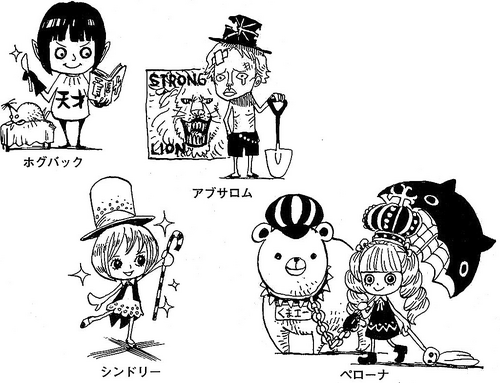 D: Oda sensei, hello! The young mermaids in the towns and coves are all beauties, aren't they? So, the question is, what did Ms. Kokoro look like when she was young? Please draw me a picture!!

O: Sure thing--. That's it for this SBS~. See you in the next volume!! Ah, and one more corner before the volume ends.