This is the collection of SBS sections from Volume 67.

D: Oda-sensei!! This starter sentence has always been a dream of mine. Please allow me to say it today ♡ *breatheeeee~~...*

O: Woah, woah, that meat right there, you've been grilling it way too long, it's getting burnt--!! Ah, the bliss of chugging down a cold beer in this spectacular outdoor nature, and along with everyone..

...Uhhm... first off, I'd like to say only the "B" is accurate. And then, well, if the starter sentence was like this, everyone would trip on their feet and not be able to properly sta--

The SBS did actually start with that BBQ!

D: There's something that has been bothering me for a while now. That is... "When in the world will Sanji's wanted poster get a real legitimate photograph?!" I am a proud Sanji fan! That is why I feel incredibly sorry for the poor guy. And so this time, I, the proud Sanji fan, have drawn a new portrait for Sanji, so from here on please use this for the poster instead♡ Here you go♡ Tee hee♡ P.N. Nanao Style

O: WHATISTHIS!!! (SHOCK) This is terrible!

Look closely at Sanji's face! Do you realize that his eyebrows should be swirled in the opposite direction at the current moment?! Please properly redraw that tail! So terrible!

O: Ouch! (sweat) Did you really do that just now?! That's merely a threatening technique! Owwww~~! You stung me right in my butt crack!!

D: Hello, hello, my greetings to Odacchi!! When I was staring at the "lady who passes out tissues" in front of the station with perverted eyes, there was this whole thing about Jinbe's plan of turning Luffy into a hero!! So in the end, WHAT BECAME OF THAT PLAN NAME? P.N. God of manga

The first half of this question JUST ISN'T RIGHT.

Anyway, for the "plan name" that Jinbe seemed to be concerned about had several candidates such as these. "The Great Straw Hat Hero Plan", "I luvluv humans plan", and "The Fuck History Plan". Hmm, even with these ideas, I'm not too sure what would become of them. Maybe they didn't need a plan name after all? 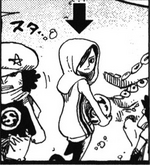 D: Odaaaaaaaaaachi! Odacchi big news, big news! You see that reaaaally cute mermaid girl with a hood in volume 65, chapter 644 (p152)? Do you? Do you?? Could it possibly be that that child ha, h-h-h-h-happens to be.. ♡♡MADAME SHYARLY♡♡? by The one who will become a pirate is me!

O: Yes, you are correct. Even though Madame Shyarly is known as a Madame, she is still actually 29 years of age. Her brother Arlong being 41 and Hody 30, Shyarly is from the same generation as Hody, yes--. Since Arlong was abandoned by his father in Fish-Man District as a small child, he never really knew the faces of his parents, but around the time Arlong became 15, a man claiming to be the father of Arlong came along with a little girl from a different mother. That would be Shyarly. When Shyarly was 4 years old, it is said that she accurately predicted the start of "the Great Age of Pirates".

D: In volume 64 and 65, when Nami and Robin see Franky's new techniques, they took on in silence. Is that really alright? Why don't they get excited? P.N. CPDX

O: Right. Penname-CPDX-kun, you're 17 now, right? There's something you need to learn now. Men and women are completely different creatures. It's a big mistake to think that they can understand each other just because they're both human. No matter who tries to explain the coolness of robots to a girl, the message will never get through. Those people like things that sparkle, things that are soft and fluffy, and things that I don't understand. We could never comprehend those things, right? So, yes, it's alright. Even when looking at such a cool thing, they'll just stare with blank expressions. Do your best, Franky!!

D: Why does Law, and not Kato-san, get to be a Shichibukai? P.N. Rou

O: Well you can tell just by looking at the shape of his nose that Kato-san isn't human. His bounty is about

D: Oda-sama. Hellooooo. In the third panel of page 151 in volume 65, there's a squid standing next to Ikaros, so could he be "Daidalos?" That's right, that's gotta be right, that's surely how it is!!!? P.N. Chagero's Friend Iwaken

O: You don't have to push the issue so hard- yes, that's right! He was still alive at the time, and those two were best buddies. But Daidalos ended up dying and becoming dried squid in an unforeseen accident. Because of the trauma from that incident, Ikaros developed a fear of becoming dried squid himself whenever he sees fire.

D: Oda sensei, have you ever wiped your butt with sandpaper? Penname- Sara Mama

D: Hello Oda Sensei. In chapter 655 of volume 66 in the scene where everyone is eating deep sea fish bento boxes, Robin says "Delicious," Luffy and Usopp are going "munch munch," but only Zoro is going "crunch crunch." Did Sanji put razor-blades in Zoro's bento, as promised? Penname- Gillette

O: hnnnnn.... AMAZING!! Thank you for reading so carefully! I mean, I drew that while thinking that it wouldn't really be that bad if nobody ever noticed, but in chapter 653 of volume 66, we have this scene. There's usually no reason to use a crunchy sound effect when characters are eating bento, but I felt that Sanji would surely put the razors and poison in Zoro's bento, so I decided to draw it in that way. The serious nature of their fight is what makes it interesting.

D: Wanze, who debuted in the Water 7 arc, is a character who made a strong impact. From some time ago, my little sister has taken to imitating him. She says, "Ra-ramen kenpo?" while waving both hands, and it's getting irritating. She says it's "Wanze Disease," but how can I cure such a malady? Penname- Ai

O: But how *wave wave* can I cure such a malady *wave wave*?' Ouch!! Ai-chan, that hurts! Quit it with the violence!! ...Ai-chan is mad!! Well, Wanze sure does bring back memories. Who cares about curing?- everyone, let's do it together! Just wave your hands vertically next to your face, stick out your lower lip, make a strange face, and go around mimicking people! You'll get punched for sure!

D: Recently I've found someone I'm interested in ♡ ♡ . But I'm worried because I don't know how to properly "attack". Oda sensei, please give me advice!! Penname- Dekiru

O: "Something like 'Gomu Gomu Bazooka' probably has enough destructive power, I think! You'll take down that person you're interested in for sure! (^^)

D: I've got a question. When Smoker was in Tashigi, she was wearing a "Nothing" bra, but is that because Smoker took it off, or because... from the start... she... I'm so turned-on I can't sleep at night! Please tell me, Sensei! Penname- Kumakoro

O: No-bra is pretty great, huh <3 For sure. To get to the bottom of this, let's ask Smoker himself. Vice Admiral Smoker, please tell us!

D: Pleased to meet you, Oda-chi! Heso!! I'll try to make this quick, but... I noticed a certain one of Oda-chi's policies? Or is it poliswees?!! Oda-chi... you don't seem to write lines in your own handwriting on the side as supplements to character's speech bubbles!? Other manga-ka do it a lot, but... please explain this for me!! Penname- Myaari

O: Ohh. Yes. Lines written in speech bubbles vs. lines written outside them- good job noticing. I did the latter back when I was a newbie and even during the early days of serialization. But I made the conscious decision to stop doing that relatively early on, so you could call it a policy. Of course I don't mind it if other authors do it, but I thought that if I did that, the reader might see my handwritten characters while reading and suddenly become aware that there is an "author", so I stopped. While reading my manga, I want you to forget about my existence.

D: In chapter 654, Chopper turns down Nami's invitation to join her in the bath, saying "I wiped myself down the day before yesterday", right? Is it because he's a boy? Or a fruit user? Or maybe... because he's an animal? I'm also interested in the bathing information for the rest of the Strawhat crew. Penname- Katana Roman

O: Well, in Chopper's case, I have a strong feeling that perhaps it's because he's an animal. Wiping his body down pretty much counts as a bath for him. Sometimes, the men of the crew have a Great Bath Party together and get really rowdy. Chopper gets invited to bathe with the ladies a lot, but he prefers the men's parties.

D: Hello, Ei-chan. My little sister said, "Robin is always revealing her breasts; she must really like doing that, huh". So I told her, "No no, it's just because that Oda-chan guy who writes One Piece really likes breasts so he draws exposed ones a lot". Am I right in my assessment? *picks nose* Penname- I like Oda-chan

O: Yes. I have here a very rude letter. OF COURSE I DRAW THEM BECAUSE I LIKE THEM!! How rude of you to doubt me!!

O: Okay, see you in the next volume! There's some info about the movie at the end of this one.