This is the collection of SBS sections from Volume 68.

D: Oda-chi, konichiwankosoba (TN: wanko soba is a type of noodle dish. The reader is making a portmanteau with konichiwa). Recently, Oda-chi hasn't been able to start SBS by himself, and I'm not going to let him do it this time either!! SBS! Shall we begin? P.N. Tatsuumi

O: What should I do? Should I start? Not start? Hold on!! 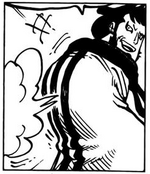 D: Oda sensei. I've been thinking, "Just once I'd like to try to do the title call for my beloved question corner of this beloved manga!!" With that thought, I've been practicing really hard. Please listen. SBS!- Let's begi-buuuu!!!
P.N. Matsumura D. Takuya* (TN: A play on the Japanese idol, Kimura Takuya)

D: This is a bit sudden, but please say "penis" ten times! Do it quickly! There's no time! P.N. Atsuuma

O: Hmm? Who indeed... Is he a popular character? Well he's got a big nose, so is he someone who appeared in a novel by Akutagawa Ryunosuke*?
...The answer is...

TN: Author who's most famous for "Rashomon". His second short story was "The Nose", in which the main character has a long, dangly nose.

D: Oda-sensei, hello!!! This is sudden, but what are you thinking now? P.N. Chiko

D: Is it really true that this guy is now a Shichibukai, after the two-year time skip!? P.N. My info source is my big brother 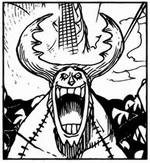 D: Oda-senseeeei!! This is my first postcard to you. I'll be quick about it; here's my question. In the New World, Franky can change his hairstyle at will, but how many styles does he have? Please tell me. P.N. Ryuusei

O: An infinite amount!!! We'll have fun with this from here on out. 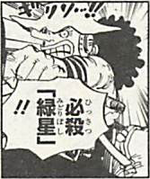 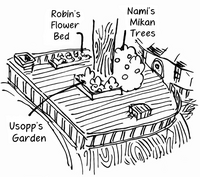 D: Oioioioioioi, good day to you. Usopp's got those "pop greens" and all, but what would he do if they ever ran out? P.N. Girls with short hair are the best ♡

O: Right. I've been getting this question a lot, for a while now. I thought about showing the answer in the actual comics, but I haven't had that sort of chance. There's actually a scene concerning this in the screenplay of the movie, "Film Z", which comes out in December. Everyone was worried because what he shoots are seeds, right? But it's alright. At the back of Sunny-Go, Usopp made a flower bed called "Usopp's Garden" where he mass produces pop greens. There's a scene in the movie where he's spraying insecticide, so those of you who see it can confirm. I'd like to include something about it in the comic as well.

D: Please answer my super question in a super way. Oda-chi! I super-dont-understand the meaning of "FR-U" in Franky's new weapon, "Black Rhino FR-U IV". I super-want-to-know. By Match and Takeshi 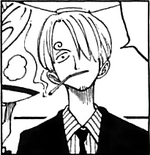 D: Oda-sensei, hello. In regards to Sanji, I feel that he looks like Leonardo DiCaprio-san from the western movie, "Romeo and Juliet". My friends say I'm dead wrong. Is Sanji's appearance based on someone in particular?? P.N. Noel

O: People used to guess DiCaprio a lot, in the past. But the truth is that Sanji has a much more unusual model. I might not go as far as to say "model", but I hoped to have a bit of this person's vibes come through. It's Steve Buscemi, as he appeared in the movie "Reservoir Dogs". Cool, huh? Someone at Bandai was the only one to guess correctly, a while back.

D: Oda-kun, is it alright if I touch Nami's boobs? P.N. Fake Tamori

O: What are you talking about!? Are you nuts!?

D: Is the fact that Luffy doesn't shrink after using Gear 3 now because Oda-chi is a pervert/transformed, or because Luffy has improved? Please tell me!! P.N. I'm Legend

O: It's because Luffy has improved. I don't know what you mean by the former option. You. Through his training, controlling Gear 2 and Third has become easier for Luffy. When I told the anime staff "He doesn't shrink anymore", they cried out with joy, "Oh thank god". I'm also grateful because that was a pain for me too. Thank you Luffy!!

D: Greetings Oda-chi ♡ Appearing in SBS is like a dream for me. Anyway, I have tons of questions I want to ask, but here's the one I'm most curious about, no doubt about it! Please tell me the ages and heights of the rookies ♡ I'll be waiting until the end of time P.N. Lui

O: Okay okay. This is how they were two years ago. Just add two years to those who've reappeared in the present. And go ahead and assume that their heights haven't changed. Because of her ability, Bonney's age is just an estimation.

D: Right before Ace died, he couldn't speak very loudly, so he asked for his final words to be told to everyone, afterwards. Did Luffy ever end up passing on the message "Thank you for loving me" to everyone? P.N. Otohimememe

O: I see. He really did promise that, yeah. But as events unfolded, it doesn't seem like Luffy was able to meet with the Whitebeard Pirates' crew members. But, that's alright. Those crew members loved Ace and went to war as a result of that love, so not a single one of them would resent not directly receiving any words of thanks. At that time, Ace had a different wish. The thing that he made Luffy promise to "tell everyone afterwards" was what, exactly? To survive. So I think that those last few words that he managed to utter reached more people at that time than we could have ever imagined.

D: Oda-chi! I went to see the One Piece Exhibition. At that time, Chapter 668, "Pirate Alliance" was the chapter in Jump!!! In the "From the Decks of the World" picture, there were three sake cups in front of Ace's grave!!! Is it alright to think THAT person visited Ace's grave?? I expect that only Luffy and that person really know for sure... P.N. Hairdresser Gonke

O: Right, this is the image from Chapter 668 that's in this very volume, but when it appeared in Jump, the advertisement messages covered up some parts and readers couldn't see it all very well. But at that time, the One Piece Exhibition was in Tokyo, and the person who wrote this letter went and saw the original image to confirm. You can also confirm it with this very volume. As for what you should think when you see this, well, I'll leave that to your imaginations for now.

D: Going along with the recent SBS Children Series, I'd like to see the Marines' Hina-san, Smo-yan, and Tashigi-chan when they were kids!! P.N. Kumakoro