This is the collection of SBS sections from Volume 69.

(Art is from HARU of Nagano Prefecture. Text in art:"From the mustache!?")

D: Before we begin the SBS, I, Eiichiro Oda, have an announcement. At last... I have achieved my heart's desire and eaten the "ERO ERO NO MI"! Guhehe. P.N. I'm Greenpeace

O: Stop pretending to be me!! You said "guhehe". You're the worst!! 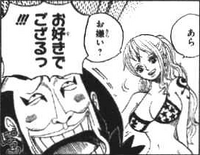 D: Odacchi!! Is it alright if I ask a serious question? You'll answer this question right? Right? It's fine, isn't it?? Then here is my question.

Whaa!! Sorry, I didn't mean that. Not now! (*sweat*) What was that trap. The breast band is the usual sort of thing people trick me with. Ahh... that's right. The SBS has begun.

O: That's not right, is it? It's not a chikuwa, isn't that right Usopp-kun?

Usopp: It's a chikuwa.

D: Here's a quiz, guess the answer based on the appearances from behind!! Which one is Vergo?

D: Hello Odacchi! I have a doubt about the Doku Doku no Mi, is it a Paramecia or a Logia?

O: Very good question. Normally, Doku Doku no Mi is confused as a Logia, because it seems to make its user a poison man capable of becoming such. However, it is no more than a somewhat different Paramecia, because its user can generate all kinds of poisons, but not transform into it. In this case, your current user, Magellan, covers your body with poison, and becomes immune to all types of poisons, in addition to providing a kind of protection against physical attacks. It hurts your side effect, poor Magellan spends more time in the bathroom than anywhere else!

(Art is from Bonio of Aichi Prefecture)

D: In a very cool scene in chapter 656, Zoro used his “Shi Shishi Sonson” to beat the dragon, but in your “Wanted” collection, in the story “Monsters,” the scene where the samurai Ryuuma kills a dragon is pretty similar! Did you have that in mind at the time? P.N.- Ono Rose Town Tribe

O: Yes. Good job on noticing something from so long ago. When writing the Punk Hazard dragon scene, I thought back to my story, “Monsters,” from almost 20 years ago. The protagonist Ryuuma, who was Zoro’s inspiration, ended up chopping the dragon’s neck in a giant panel. I didn’t go as far as re-reading it, but I recalled that scene and decided to do another big panel action scene. It’s neck-chopping from when I was 19 and 38 years old, respectively. Please compare them (*laughs*).

D: Before the timeskip (in volume 61), Nami was reading a book on Weatheria and said, “An island where it rains lightning!” This lightning island… could it be where the G-5 ship had stopped in chapter 655 of volume 66? Please tell me! If you don’t, I’ll do the “pew pew pew”!! P.N.- P.S. I love Law

O: “Pew pew pew!!”... don’t make fun of the beam!! But that’s right. It’s one of the three islands that the needles pointed to (the first needle to be exact), from Fish-Man Island, and the one that Luffy wanted to go to most. It’s the island where it rains lightning, Raijin Island. Near the end of volume 60, it’s also the island that Urouge was headed for. Although Smoker’s intuition about Luffy’s mentality was spot-on, the Sunny Go met with the Whitestrom and ended up at the unmarked island, Punk Hazard. If they had gone to Raijin Island, I wonder what kind of adventures the Strawhats might have had?

(Art is by Ryo of Wakayama Prefecture)

D: Oda-sensei, I have a question. Please tell me the current profiles (birthday, height, age) of all of the members of the Straw Hat Pirates!

D: Oda-sensei! Please tell me the order in which the members of the Straw Hat Pirates joined the crew! I'm really grateful! P.N. Yoshikawa

O: New readers!! Yep, that's right. I didn't realize. One Piece has been going for 15 years already. P.N. Maaa-kun is 10 years old. Then I'll tell you. When you grow up, try reading about the origins of the Straw Hat Pirates. The inset numbers are the order in which the crew members joined. This is the first time that the heights of the crew members two years later have been released in the volumes. By the way, before the Thousand Sunny, the ship they sailed in was the Going Merry.

O: Their individual bounties can be found at the beginning of the volume, on the first character introduction page.

(Art is from Satomo of Yamanashi Prefecture)

D: Okay, Odacchi! Please tell me the name and knacks of that strange way of running Zoro, Kinemon, Sanji, and Brook use!! P.N. Match and Takeshi

O: Hmm. Well, ignoring the new admiral Kazutoshi portion, you're talking about when they're running real fast like "Dabadabadaba". I mean, back in the day, pretty much everybody used this method in manga and anime to convey running. I guess I don't really see it being used these days. Basically, they're just running so incredibly fast that you can see the afterimages of their legs and they end up looking like they have multiple legs. As for the name, I shall name this move the "DabaDabaDash". The way to use it is to simply, move your legs at an expeditious rate. And while you're at it, please continuously keep screaming "DABADABADABADABA!!". It'll be a popular move in the next IAAF World Championships.

D: Odacchi--! I'm afraid I've just realized something. The names of "Foxfire Kinemon" and his son "Momonosuke"—you took them from the superstar of the Showa Era, Mr. Nakamura Kinnosuke, didn't you... Probably!! How's that!! P.N. Sacred Tree-kun

O: Yess! You are correct. He was famous for his roles in period dramas, and I'm an huge fan. 'Cause, like, I'd be a lot more pumped about drawing them if they were kind of references to him, y'know what I'm saying!? This is for the future and I can't hold it in so I'll just say it here, but Luffy and the crew will eventually go to the Wano Kingdom. Oh my gooosh, ever since back in the day, I just can't wait to draw that moment~~. All of my interests may end up being exposed when that happens. Heeheehee.

D: One Piece has incredibly many characters, but please tell us which character is the most difficult to draw for you. P.N. Noel

O: Let's see--. Franky Shogun is a pretty big pain in the ass to draw. I love designing robots and all, but redrawing them over and over isn't really a forte of mine. But that's robot talk. If we were to talk about just humans, I'd say women take longer to draw than men for me. Especially black-haired women. For black hair, there's this process called "tsuya-beta" (negative drawing). It's a real bugger having to color in with a brush pen whilst keeping the negatives, or the gloss, in the hair. With that said, my answer is Hancock. Knowing she had to look like the most beautiful woman in the world was the toughest part of all.

O: Huh...? (sweatdrop) What's with the warning sign? Wow, this offends me! Alright! Then how's this, I shall answer these questions with class and dignity in order to prevent people from thinking of this section as vulgar. Hum. Hum hum... now then... begin with the inquiries......

D: Sir Oda Eroichiro, greetings. Why did Caesar demand to have Law's heart? Logically speaking, I feel like his dick would be so much more of a vital body part to lose.        P.N. ikeyan

O: ...Hum. Indeed... the willy (classy) would also be a vital body part. However, how would the imagery turn out looking like? Law holding his willy, and Law holding his heart. Which has the better impact...? For instance, Law... They say that he, in order to join the Shichibukai, delivered 100 hearts to the Marine Headquarters... But... if he had delivered 100 willies instead, by now, Law would have become a Shichidikai.

D: Vergo can use Busoshoku on his entire body, right? Could this mean that his "manhood" can also use Busoshoku?   P.N. New Kama

D: Mr. Smoker, how could you tear off Tashigi's bra in her body! (From Volume 68 SBS) Unbelievable. If it was in the way, you should have just worn it on your head like Oda-sensei!   P.N. Yumasai

(Art by Pipoaian of the Saitama Prefecture)

O: Alright. How about I draw Domino too?

D: Odacchi x2!! If "Marriage Proposal Lola" ate the Sube Sube no Mi what would happen to her?
P.N. Nasuo

O: I doubt she'd really look all that much different, you know? But her skin will become incredibly smooth (sube sube)!

'D: Odacc-HI!! Odacchi... What did you have for breakfast? Your face has a nice glow to it. Speaking of breakfast, in volume 68 page 106, could Vergo's breakfast have been potato fries...?? Well?     'P.N. KBBQ straight from the morning, bro

O: Man, just about everything gets stuck onto that man, doesn't it. I think it was probably his usual hamburger meal. Hamburger, fries, and a shake (strawberry flavor). This is what Vergo eats every morning for breakfast. Also, my glowing face is probably just left over illumination from the previous meal.

D: About the mystery of Nami-san's New World bust size from volume 66, I would like to provide my opinion as an employee at LADIES' INNER. Nami-san's bust size is most likely a "J Cup". There is a possibility that she may have even grown bigger than this. ...If my calculations are correct, her band measurement is 63 cm, and her bust is 98 cm. If we were to use these measurements, she would end up being a "K"; however, right now in Japan, there is no such thing as a "K" cup. She'd have to order from overseas. Oui, in other words, non-standardized!!! Well, personally, I'd say that Nami-san is a "Nami Cup". (Boiing)

O: Alright. Boys, the day has finally come. This fire that readers started on volume 66. Thank you all for submitting these countless letters. Sanji-kun! Has your nosebleed stopped yet!? Now, give them the presentation!

Sanji: Yeah... sorry about last time. So it's Nami-san and Robin-chan's current 3 sizes, right? They did in fact grow in size, but don't be tricked!! In these 2 years, what really improved is their "sexiness"!

O: Ahh, fantastic! This is great! So easy to remember! Thank you, Sanji-kun! Ahh I see, so this is what the "Nami Cup" is like. So awesome.

Nami: What are you doing? If you're gonna use my body as one of your conversation topics, then here... hand it over (sparkle)

Wheeze...wheeze...okay then...wheeze wheeze... let's end here. The reason why there's so little content at the end of the volume this time is because I recklessly begged for a 12 chapter release this time. I got yelled at by Shueisha, scolding me to never expect something like this again. But... I just really wanted you all to read up to chapter 690... I'll do my best from now on to have less lag in my storytelling... See you in the next volume~~!!