This is the collection of SBS sections from Volume 71.

O: Hey everyone! I'd like to give an energetic welcome in this volume too - "LET'S BEGIN THE SBS!!"

D: Question. Odacchi, I have a question. Since when in his life did Franky become a pervert? (^▽^) And is the new Shichibukai this guy? → P.N. Minced Sausage

O: Um, no?? Oh, and Franky was a pervert since his previous life.

D: Odacchi, I found him!!! It was unexpectedly easy. I'm telling you, it's that guy, that guy Candre! Volume 57, page 108, panel 3, second from the left, it has to be!! If it's wrong, then there's something wrong with your head, Odacchi. Right? It has to be!!!! P.N. Teagwecheikei

O: Yup, there he is. Last volume I asked whoever was bored to find this guy, Candre. That's him.

D: Hello! This is regarding the twin brothers "Andre and Candre" mentioned in the Volume 70 SBS. Is this referencing Inoue Yōsui-san from around his debut over 40 years ago? His hair was also an afro at around that time too. P.N. Used to be a guitar-kid

O: Yep, that's it. Although I got the name from that, I actually know nothing about "Andre Candre". I just know that name from television. You must know it because you're 56 years old, right. By the way, the reason I gave him the name Andre is because I thought he looked like the pro wrestler called André the Giant. Yeah... there wasn't much thought behind it (*laugh*).

D: Question. Robin always says frightening things in front of everyone. But in her own thoughts, she oftentimes thinks of fun stuff like "Cats" or "Dress-roba" (T.N. - Dress-roba is a pun on Dressrosa, meaning "Dress-Old Woman"). Why doesn't Robin talk about these thoughts with her crew to make them laugh? I love how Robin is like this. P.N. Y.O 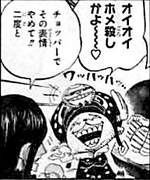 O: I see, that's true. From what I think, from the Punk Hazard Arc when she told Franky (in Chopper's body) not to ever make such a strange face in Chopper's body again, Robin probably likes cute things. But even though she likes cute things, she's a bit dark/creepy herself, so if she tries to put these cute thoughts to words there is a chance it may come out as scary/ominous. That's the kind of woman that Robin is.

D: This might be out of nowhere, but who in the Straw Hat Pirates can use Haki? It's bothering me and I can't activate my "Love Hurricane".

O: It's these three. Their specialty haki color is in the parentheses. 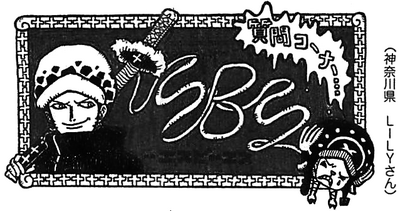 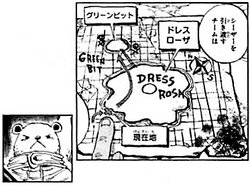 D: In Chapter 701, Law claimed that one of his crew drew the map that he shared!! Is that crew member by any chance that Bepo guy!!? I ask this because at the bottom right of the map you can see a blurred paw print. It's him, right? P.N. TakaAki・T

O: Yes it is, of course. Bepo is the navigator of the Heart Pirates after all. He drew that map.

D: Odacchi! In Volume 70, Chapter 700, Sanji made onigiri for Law, who doesn't like bread. What was inside those onigiri? P.N. Natsuki

O: Well, the first onigiri had Tuna-mayonnaise inside. The second onigiri had okaka inside. And the last onigiri had super sour umeboshi inside. By the way, Law hates umeboshi. A few minutes later, he and Sanji got into an argument because of that. 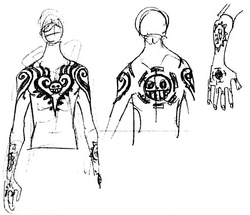 D: What's the name of Law's sword? How many tattoos does Law-san have? Odacchi... please draw all of Law's tattoos!!!! (≧□≦)

O: OK, got it! Here are the drawing of Law's tattoos taken from my notes. → He has heart themed tattoos, but I wonder if there is a reason for that? The name of his sword is Kikoku (鬼哭, Kikoku?, literally meaning "Demon's Cry"). It has no rank. It is a "cursed sword".

D: Is it possible to make kakigōri out of Aokiji? P.N. Baka-Inu

O: Yes, it's possible. After-all, he's ice. But, eating it might be a different story. He might return to Aokiji in your stomach and take control of you. 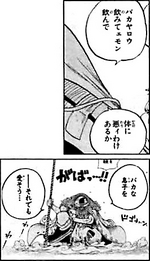 D: When my father, who loves Whitebeard, comes home drunk every night and gets scolded by mother he responds "How could drinking something you love be bad for your body, gurarararara?" But, the next morning he's on his knees bowing down to my mother. How can my father be cooler? P.N. Biro & Akke

O: Hmmm, it was going well for him up to a certain point, but the next morning is pretty disgraceful. How about your mother also becomes Whitebeard and says "I will love my husband, even though he is an idiot." and forgives him?

D: Frequently, my cat will suddenly jump on my lap and it is very cute. My father (age 59) also frequently will suddenly place his head on my mother's lap and want her to clean his ears but is disliked for this. WHAT URGES THESE TWO TO USE PEOPLE'S LAPS AS PILLOWS? P.N. Neco Robin (TN The "Ni" of Nico Robin is replaced with the kanji for sleep)

O: It's kind of sad that these questions at the expense of fathers are continuing on like this. Well, I guess using people's laps as a pillow has its own appeal. It's the same calling that beckons the mountain climber to the mountain.

O: Ah!!! There was toilet paper around my mouth, sorry about that. (TN: Vergo reference)

D: I thought of birthdays for Caesar and Monet! Caesar is April 9 and Monet is August 27! Is that OK? P.N. Nakamura Ida (TN: Both are puns. 4月 is April. 9日 is Ninth. 4月9日 can be read as "Shinokuni" using Japanese onyomi. Same with Monet. With a bit of effort 8月27日 can be read as "Become a Harpy".)

O: Yeah, sure. *Hojihoji* (TN: hojihoji is an onomatopoeia for picking your nose. Probably used in this case to signify that he couldn't care less.) 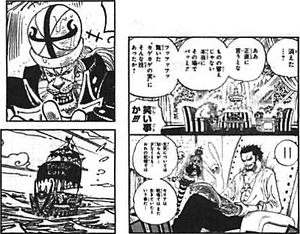 O: Yes, that is Absalom. How nostalgic. In fact, he was also at the Battle of Marineford. After the battle, Doflamingo stated that something strange happened to Moria. I wonder why? Perona is also worried. Did Moria really die? The only thing that I can reveal right now is Absalom, going by the name "Absa", has been reporting a lot of big news using his Suke Suke no Mi; this is true. He can take many interesting photographs with that ability. His articles are very popular right now.

Alright, with that I'm ending the EroBS. See you next volume!!