This is the collection of SBS sections from Volume 75.

The parent guardians have started...

That's what it actually is. That's right. We'll be starting now.

D: As the midterm season approaches, there's only one thing that I need to be doing right now, and that's BECOMING PIRATE KING!! P.N. momotaRou

I think you've just made a grave mistake. In life.

D: Odacchi! Ello. So Marine Admiral Chaton, who asked out bombshell sexy dynamitz Momousagi from the SBS on page 86 of Volume 74 100 times and got rejected 100 times looked something like this, right? (→) P.N. The Hide-yan with the red hair

O: Uhhh. So since he can't possibly be one of the admirals... Oh, it must be that dude, right?

The guy that, like Momousagi, was nominated to be an admiral; this (→) guy, Vice Admiral "Chaton", right?! You're right, you're right, I found him in my sketchbook. There actually was a time at one point where I considered making the new admirals a "Pig" and "Kappa" to match the "Monkey" "Pig" and "Kappa" trio from Journey to the West. However, in the end, I decided against it and we're here now with our newest additions, the "Tiger" and the "Bull". There is an actual reason for this, but I won't tell.

D: I saw cute Shirahoshi on the cover and started reading Volume 63 when I suddenly realized something.

You're gonna have to be responsible about this! Oda-Sensei!!!

O: You're absolutely right. People who didn't notice could've just treated her as a new character and carried on with their reading, but I'm really thankful to see that quite a lot of you actually noticed. I imagine that people in the "Revolutionary Army" all have some sort of strong feelings that go against the flow of the world, but as for the current "Fish-Man Karate assistant instructor", I just started thinking about the kinds of emotions that the human girl named Koala must have gone through in life after her previous appearance, and the things that came to mind just brought out all the feels inside of me.

To me, Koala is someone who leads a life that is polar opposite to that of Hody's, and I feel that, in general, she is a very special character.

D: Nice to meet you. I am a 24 year old lady who has an affection for sharks. Sharks are widely known for having 2 dicks, but does Hody also have 2 dicks? Also, how many dicks does Odacchi have? P.N. I want Shirahoshi to be my waifu

He has 2 dicks, so he must be a double dick!

I guess personally, I only need one. 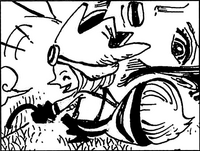 D: The tail-like thing that dwarves have on their bums, just what are they? Penname Maa-kun

O: Er, they're tails. They may look very soft and brushy at first glance, but they have extremely hard cores inside made of bones and muscle that assist with their extremely quick movements, and they also have the ability to apply a great amount of brute damage that comes in handy during battle.

D: Question. I used to think that my husband was a Beta Beta no Mi user.

This is because his face, neck, and armpits are always extremely sticky.

But then, it was revealed that Trebol is the current Beta Beta no Mi user...

So then just what is my husband's ability? P.N. Emukichi

O: It must be the abilty to excessivly sweat. 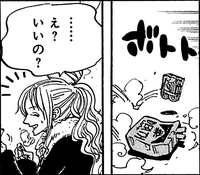 D: This may be sudden, but please tell me, is the lighter that Sanji was using in "Z" (the movie) and the one he uses in the beginning of the anime opening "HANDS UP!" the same one? P.N. Loves ♡ the Cook way too much A.K

O: "HANDS UP!" seems to be the previous anime opening. I have no idea wether it was used there, but during the time around when "Film Z" was aired, I actually personally collaborated with a French company called "Dupont", and the lighter I designed made it's appearance in the movie. To tell you the truth, I also secretly slipped it into the main series on chapter 663 of Volume 67. Hm? Have I said this yet? Oh well. I think you'll be able to find the real thing on the internet if you search "Dupont Oda" online. Also, Sanji uses this lighter.

D: Question. Oda-san. The two guys I have here who seem to be really fond of polka dots must be the same person. So this old guy had actually seen Ricky back when he was young after all, huh. P.N. Berg Taguchi

O: Ok so. This must be the recent scene where this guy in the colosseum is talking about how he feels like he's seen the masked gladiator Ricky, a.k.a. King Riku, before in the past. He does, in fact, also make an appearance in the colosseum as "Ricky" during the flashback. So you may be wondering, "is the guy who was in the audience back then this person?", but so close!! Your intuition seems to be very sharp, but you can actually locate this man, who is a long time regular at the colosseum, on a different day. Don't you agree that the person from chapter 741 looks really, exactly like him? Now that we've got that down, take a look at the guy above the man in the panel you've pointed out to me. It's that dude!! (lol) Let me introduce him to you! Mr. Mukkashimi Tower, age 56. He loves watching gladiator fights- so much that his wife and child left him- but he's still doing great!

D: Good morning (currently 3 AM). So about volume 57, chapter 560! Right in the scene where Luffy hugs Hancock, I understood when the marines said it was a "Buchikamashi" [ぶち噛まし - a sumo move], but I've never heard of a move called "Sabaori" [鯖折り, written with the kanji Saba (Mackerel, which is written by combining the kanji for "fish [魚]" and "blue [青]") and the word Ori (折り, to bend or break)] before. What in the world kind of activity requires a move written as "Fish Blue Break"? P.N. "T.T"

O: Yes, Fish and Blue combined. A Sabaori [Mackerel Bend] also happens to be a sumo move. To use it, you must embrace your opponent and break his hip. Seeing how Hancock flopped onto the ground afterwards, the Marines must've thought that this was the move Luffy used on her. 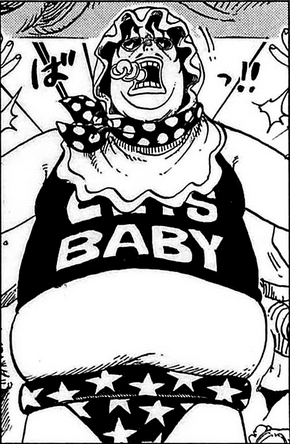 D: I have just one thing to say to Odacchi as representative of all young maidens.

SENOR PINK SHOULD NOT HAVE BEEN A THING!

Um, could you not take Senor so lightly? It says here that you're 17 years old, and yeah I get it, you youngin's tend to always judge a book by its cover, so just you wait, I'll show you soon.

The epitome of manliness, that is!

What it really means to be hard-boiled!! 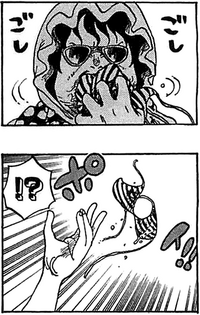 D: Question. What would happen if you chow down on a bunch of tomatoes at the pool and wipe your mouth down with the bikini of some random cutie walking nearby?

P.N. I want to be Shimizu Chagero's disciple

O: Ouch... So someone actually went and did it...!! I understand, those feelings of longing and admiration to be like Senor.

So you're currently 13 years old. I would advise you to experience life for, say, around 30 more years, until you start reeking of coolness. I promise to develop Senor's character and good side to guide you in your journey!

Also, I wouldn't go in the direction of your pen name. Just don't end up on the wrong side!

D: Odacchi, nice to meet you! So getting right to the point! What is Sugar's true age?!

It bothers me so much that Sugar was the only thing I could think of during exams! Even though I have to get into college...

Thanks to you, my scores were absolute crap♡ P.N. Gahara

So, there's more background to this, but in a nutshell if you think about all the present facts that I have to take into consideration, she's actually not that much of an old hag after all.

At the moment, her outer appearance has stopped at the age of 10, but her true age is 22 years old. That would be 2 years younger than Baby 5. -----in fact, let me just reveal the entire family's ages right here.

With ages ranging from the 10s to the 70s, they're really just like a big, big family.

Alright, and that'll be my time. SBS ends here! However, at the end of the volume, there will be a notice about the first character popularity poll in 6 whole years!! The popularity poll that, so far, only Shonen Jump readers were given voting ballots to! We've decided that the Comics readers should also be allowed to participate, so if you're interested, make sure to read the end of this volume! Now then, see you in the next volume for more SBS!