This is the collection of SBS sections from Volume 77.

This is a work of art that was submitted and featured as part of the Usopp Gallery Pirates segment in volume 23. ---and then, there's this super popular series that's currently being published in the Shonen Jump magazines called "My Hero Academia". Take a look at the authors.

This is volume 23 we're talking about, so I guess that makes it around 10 years ago? The same person who, as a boy, submitted this postcard, is now a widely recognized and extremely successful professional mangaka himself!! Not only that, but his work actually ended up being serialized in the Shonen Jump magazine right alongside "ONE PIECE" itself!! This news gives me ecstatic joy. You see, a bit back at the Jump new years event, he himself actually came forward and told me about this. You should've told me earlier, I would've totally rooted for you!!

With that being said, please go and check out Kohei Horikoshi-sensei's series "My Hero Academia"!!

O: Yeah. In fact, I do remember about this one time that I ate a really gross-tasting fruit for dessert and... ever since then, I became like this and...

What do you mean I became like this!! (shock) Such rudeness!!

I hope for the various belongings of your family to grow larger than the body.

D: Odacchi, hello!! So about the conversation that Kanjuro and Kinemon are having in (volume 76) chapter 754, page 2!!

That dialogue comes straight from a Rakugo performance, doesn't it!

The "Summer Doctor" one!! Odacchi, do you really like Rakugo??

O: You're right. That particular scene was a scene that I wanted for Rakugo fans to have a chuckle at. "Chisha" (萵苣) would be the old word for lettuce. In Rakugo, there is a particular phrase that goes "the summer doctor always makes my stomach hurt", and that line was supposed to be a pun on this phrase. There is also a Rakugo story known as "Escape Sparrow", which is about how a sparrow that someone with insanely good drawing skills drew sprung out of the paper and came to life.

Rakugo is super fun! I bet none of you even care (cries).

D: Could the large scar on Sabo's face possibly come from the time...

O: Yes. So, to be specific, the coat reads "Corazon (corazón)" rather than "Cora-san". In Spanish, this word means "heart". While this is in fact straight up Cora-san's code name, it can be said that there isn't really a problem with the captain of the "Heart Pirates" wearing this coat either. Even speaking ability-wise, Law is a "death surgeon" known with his unique skill of cutting peoples' "hearts" out. While to society, it may seem like a symbol of fear and power, I'm quite positive that Law himself had "Cora-san" in mind. It's definitely custom made.

Is it derived from the full-length novel written by Cervantes? Since the main character, Don Quixote, rode around on a horse named Rosinante, it intrigued me enough that I decided to submit a postcard. Please give us a detailed explanation! P.N. 0196

O: "Don Quixote", I see. In a nutshell, it's a satirical story about a slightly insane knight.

Let me explain myself in detail!!

I named him on a whim.

D: How old is Corazon? Why is it that Sugar isn't present in the Dofla-family flashback scenes? P.N. Roronoa Romugen

O: Corazon is 2 years younger than Doflamingo. He died at the age of 26. So Sugar and Monet would end up joining after this incident. These two were rescued from an extremely misfortunate environment by Doflamingo himself, and as sisters aged 9 and 17, they resolved to throw their lives away if it were for the sake of the Family. They were provided with Devil Fruits after joining. You see, Doflamingo is very observant of the "environments" that people grow up in.

D: Odacchi, hello! I totally just decided to randomly read Luffy's palms without permission or being asked to!

And so guess what I found out!!

Turns out he has THE CONQUERER'S PALM, aka the "MASUKAKE LINE"!!!

Everything I looked up about his palm lines are literally straight up Luffy's personality! Now his Haoshoku Haki makes sense too! That's our Odacchi!!

To think that you even went as far as taking his palm lines into account when developing him as a character... absolutely incredible!!! P.N. tauteniKimi

That's right, I always take care to take even a character's p... p... palm lines into account when I design them. You see, I thought this just had to be the line that best suited Luffy! mosu... Masukake Line!? You're absolutely correct, I'm amazed you even noticed! 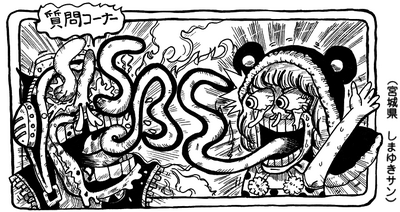 D: A question for Ei-chan. If you take a single bite out of a Devil Fruit, and then someone else eats the rest of it, will they still be able to gain the ability? Take it away, Ei-chan. P.N. ☆Monkey-chan☆

O: Ehh, They will not. Once someone takes a single bite out of the fruit, the ability becomes solely theirs in that moment, and from then on, the fruit simply becomes a insanely gross-tasting fruit. Still, everyone takes care to eat the whole thing without knowing this.

D: Please reveal the age and height of revolutionaries Sabo, Koala, and Hack as well as what species of fish-man Hack is! Also, can Hack's birthday be 8(Ha)/9(KKu)? P.N. Katana★Romantic

O: Yes. And that's gotta be his birthday, for sure.

D: *Celebrate* Congratulations on their marriage!! That is, Baby 5 and Sai!! By the way, what kind of woman is this "Uhoricia" that was mentioned as Sai's ex-fiance? I imagine a rather gorrilla-esque... strong, independant woman... P.N. Heidi's senpai

O: I heard that she is a woman with gorgeous hair and a cool look to her eyes →

D: Oda-san, hello~. About Bartolomeo, he said something about how his barriers have a limit or whatever, so how many Bari-Bari's worth is its maximum capacity? P.N. Hoichael Jackson

O: Great question. There is in fact a limit to the space his barriers can cover, as well as how many barriers he can put up at a time. He can only hold up one barrier at a time, and they say that this one barrier can cover up to 50 thousand Bari-Bari's!! Amazing! 1 Bari-Bari equates to roughly 100x that of 1 Bori-Bari-Bari, so in other words, his barrier capacity is just about 500 Pickle-Pori-Pori-Bari-Bari's.

(Translator's Note: Bari, Bori, and Pori are all Japanese sound effects that roughly translate to 'crunching'.)

D: In chapter 765, from looking at what we see of the castle, the island that Corazon and Law were on was the same island as Noland's homeland, "Lvneel Kingdom"!! I wonder if Corazon was thinking, "maybe if we go to the island that was able to cure Tree Fever, which also caused people's skin color to change...!!" and took Law there. Just my wild imagination itself is starting to make me tear up. Please pass the kleenex. P.N. Sacred Tree-kun

O: Correct. They are, in fact, the same place.

The scenerey really hasn't changed at all from the past there.

Now you're making me tear up too.

Corazon is such a good guy~ (cries).

D: To tell you the truth, about Cora-san's birthday...

(Translator's Note: With a stretch, the numbers 0715 can be related to the Japanese pronunciation of "No Sound Corazon" [Oto Nai Corazon] with the 0 representing to the "O" in "Oto", the 7 and 1 combined to create the word "Nai", and the 5 standing in for the "Co" in "Corazon").

O: Mmkay. What he said. Right then, SBS ends here.

The Tokyo One Piece Tower just recently opened! Go there! Okay then, see you in the next volume!!