This is the collection of SBS sections from Volume 8.

D: Salutations. I am an earthlien* who lives in the same house that Usopp's father Yassop's friend's brother's girlfriend lived in a long time ago. *An earthlien is half-earthling, half alien.

D: The hourglasses on both sides of Don Krieg's skull and bones are supposed to indicate a threat to the enemy, but were hourglasses really used for that meaning? At that period in time?

O: There really were pirate flags with hourglasses on them. It basically indicated the time left until the death of their prey, so it holds a meaning like, "It's only a matter of time until your surrender".

D: Oda-sensei. Since Luffy is a Gomu Human, does that mean his "penis" can stretch, too?

O: His penis can stretch too.

D: I have a question. How many g/cm3 is Sanji's kick power? I would like you to give me an answer to two decimals, please.

O: To tell you the truth, it's impossible to measure. There are games at the arcade that measure your kick power? Well, if Sanji used one of those, he would destroy not only the game, but the wall of the entire building. But if you tried to put it into a form of measurement, I would say 21 bats. The power to destroy 21 wooden baseball bats in one kick.

D: Yo!! Ei-chan!! Are you still working on One Piece? Keep drawing, man!! Okay, Ei-chan, here's my question. Who are the "One Piece" characters with the highest and lowest IQ's?! Okay, that's enough for today.

O: I'll tell you. But when I say "in One Piece". I really mean, "of all the characters introduced so far in One Piece". And having cleared that up, the character with the highest IQ is Shanks' first mate, Benn Beckman. He is a great crewmate, who  supports Shanks with his astonishing wisdom and strength. And right after him would probably be Captain Kuro, then Nami, etc. Now as for the lowest IQ... I can't decide the worst one. They're all idiots.

D: Oda-sensei, is your house really made of cardboard? (I heard from a friend.)

O: Yes. Whether it's rainy or sunny or snowy, I always draw my manga. But don't worry. The certificate ink I use is waterproof!! (Caution: good children should not believe me!)

D: What is that cape-like thing that Buchi of the Nyaban Brothers has? Is it a futon?

(A kotatsu-buton is the futon that covers a kotatsu, which is a table with a heater underneath. The cover keeps the heat underneath, and cats are said to love hiding under the kotatsu where it's warm).

D: Is Luffy's pose on the cover of Volume 3 from Ken Shimura-san's "Aiiin"?

O: He loves to say shit. 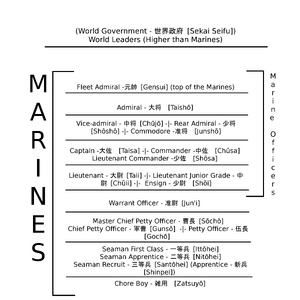 D: I don't understand the Marines system very well. Is Captain [Taisa] the highest rank? Is Koby at the headquarters? Or a base?? Where does Lieutenant [Taii] Fullbody stand?

O: This is it(→). This is the entire explanation of the Marines system in the world of "One Piece". The base Koby is in is the 153rd branch. Officers of the rank of Captain [Taisa] and above command the bases spread out all over the world. I wonder when the day Koby advances to be an Officer will come.

O: Well spotted!! Amazing!! That would be Mr. Motzel, the gourmet, yes? He ate her food. Then they fought afterwards. The girl beside him is Mr. Motzel's daughter.

O: Class Schedule... ahh... that brings back memories! How about something like this!? Use a copier to enlarge it or shrink it, and use it however you like!! Are there schools with seven periods? I drew it that way, just in case.

D: If I want to be a girl as cool and courageous as Zoro, how should I start?

O: A girl, eh? Hmmm. First, you squat!! Then, in order to become courageous, eat some sardines!!

D: Konnichiwa Oda-sensei, I mean, nihao!! I wracked my non-existent brains and created a song for Luffy. Please read, dance and cry!

D: Is Luffy made of natural rubber? Or artificial rubber? -A Meteorological Agency Investigation- (Ministry of Education rip off)

D: When we were talking about One Piece, I said I like Shanks, my friend S. likes Zoro, and I. likes Luffy, but R. likes Buggy and Jango. Should they go see a doctor?

O: Choosing those two is certainly a serious illness... But you should just tell them to rest at home and take it easy. And then tell them to get... stronger... and that life is worth living, and... stuff...

O: I've gotten a ridiculous number of these letters... So many. But I cannot answer that question. I can't answer it... yet. Please just read it as "D" and don't think too deeply into it, for now.

O: It's not just pirates and rum, but sailors and rum. In short, rum is cheap. Because of that, back in the sailing days of England, the liquor they supplied the navy with changed from brandy to rum, and the hard-drinking men of the sea became associated with rum. As for why they would take so much liquor, it was because the water would go bad on longer voyages.

O: You met someone from the Gomu Gomu Planet?! Wow!! That's great!! A "Poison Gomu Gomu" is 10 times as much as a "Gomu Gomu". So in other words, 7,050 Gomu Gomus!! That's an astronomical length!! But be careful. Gomu Gomuns are notorious for giving the most ridiculous answers in the universe.