This is the collection of SBS sections from Volume 83.

D: Oda-sensei, hello. It's about the introduction of the 20 crew members of the "Heart Pirates" who got a raw deal in chapter 815!! I thought there are only men in the crew, but there are women too? Right?? I'm surprised. P.N. Shirokuro Panda

O: EEEEH!! That's quite a surprise! Everyone says, why do you want to know!! ... Well. Before, I drew the members who disagreed with forming an alliance with the Straw Hat Pirates. I will reintroduce the three members who were left out due to lack of space.

← This scene. Maybe they weren't convinced about the alliance yet.

D: In chapter 792, a neighboring country called "Apple Nine" as featured. Could the name of this country, by any chance, derive from ringoku (ringo (apple) - ku (nine)) Apple Nine? P.N. Haru

O: Well you see, they would struggle to ride on a normal bicycle, so they have their own bicycle shops in the country where Longleg tribe members come from. There, they make bicycles specifically altered for people with long legs, so they have no problem riding bicycles. Thanks for your concern though!

D: The mink tribe uses words like yugara, or agara, or yutia, right? It seems they are used when addressing somebody, but is there any idea behind it? Please tell me. On this occasion, please "Garuchuu" me. (Laughs) P.N. Jinbei's Disciple Mag

O: Garuchuu. Yes. I think this might be confusing at first, but it's simple.

That's basically it. Additionally, plural forms would be "yugara-ra" and so on. Please read it spontaneously. It's a miracle how a species, living in an isolated country, can communicate with words like this.

D: Odacchi!! In the sbs from volume 82 you told us how to escape from Akainu, bears, ghosts and the like. But when I try to do this before my angered mother I'm just beaten up... Is my mother stronger than Akainu? P.N. Star Fairy

O: You better watch out! you're being too brash! A mother is the strongest living being in the world, even stronger than Kaido!! Don't you dare do it again! But, you know, your mother loves you more than anyone else. 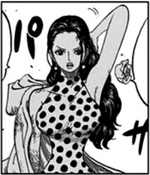 D: I love the Dressrosa arc and have read it many times... but there is one thing I don't really understand. So I sent this question to the current sbs and you. "Why did Viola and Doflamingo call each other "Doffy", "Violet" in chapter 788 "How I fight"?" What were both of them thinking of at that time back then? P.N. Fuki

O: Hm, she was dashing against the enemy. There is a deep secret setting I can't tell you about though. I informed the supervisor about it, but since it is a pretty adult part of the story it remains hidden in the shonen manga which One Piece is. To all adults, please try to imagine yourselves. Dressrosa is truly a passionate country!!

D: Hello Odacchi! Hercales-n always uses "n" at the end of words. Could his actual name, in truth, not be heracles at all? P.N Uchi-san

O: Well... in regard to this, it could be an eternal mystery-n.

D: Odacchi, here's a question! What is with Zou's legs? Are the inhabitants of Long Ring Long Land, surprisingly, Long Legs?!?! P.N. Shoko-tan

O: Yes, you focused on something interesting. Indeed, if you think of the form of a normal elephant, you think something like "sea? But it's too deep [for elephants to stand in the water]!". The truth is, the scientific name of this elephant is "Naitamie Norida Elephant" which possesses oversized legs with multiple joints. Maybe I will include this in the main story someday, but that's basically it.

D: Am I the only one thinking that the technique called "Sheep's Horn" from chapter 795 looks like poop? It weights heavily on my mind, I even can't grab tapioca with my chopsticks. P.N. Friends seem to be able to drink black coffee

T/L note: A type of starch extracted from cassava root which is also used for tapioca pearls in bubble tea

O: To me it looks like poop as well.

D: Hi Oda-sensei. Did you know that the best high quality coffee in the world is made from the excrements of elephants? When it comes to an elephant of 1000 years, I think some good dung should come out. So absolutely, please brew coffee! P.N. Sanadacchi

O: I'm hearing about that for the first time!! I searched, it's true!! I theoretically understand, still, I will contain myself after all!! And that's that.

D: Oda-san. Heso!! When talking Skypiea skills, pumpkins are one of them and the guy who told them about a plant called this pumpkin is a botanist named Noland, is not it? When I saw Dressrosa, they were everywhere! Could Noland also teach how to plant pumpkins on the Tontatta tribe when they meet? P.N. Kamiki-kun

O: Yes. It is true. Perfect. Pumpkin is very nutritious. And it seems that wherever Noland goes it is rooted there. Maybe he is a man who loves nature.

D: There's something I want to ask about Vito's "Monster Gun" from the Fire Tank Pirates. He has a very big hand. Although, the clothes that he uses appear normal size. So how did he put his hand in there? P.N. Stark Yang 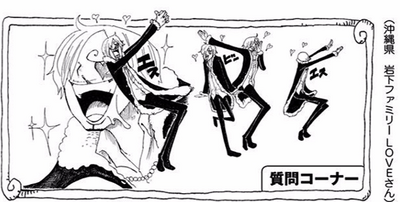 D: Oda-sensei. Hello! I'll fill in the blanks on the birthday calendar.

By the way. How old is Sai? How much time separates him from his partner? Referring to... I'll... envy them. P.N.Uholishia

O: Eeeeeh!? Not what ~ Sai's age is..No. I'll show you everything that receives a bottle of sake.

Young Sai. Does he look so old to you?

D: Odacchi~~! What happens if I pull a woman's underwear like Smoker~? (From SBS Volume 67) If I do not intend to try, I will not know! OK. Come on! To Eiichiro Oda-sama! I was arrested. Why? P.N. Shimizu Chamoro