This is the collection of SBS sections from Volume 84.

D: When I try to pet my cat during the dry season, I get a little electric prickle. Could my cat be a mink? P.N. Year of the China Rabbit Y

O: That is absolutely a mink. Watch out—it might be waiting for the dawn of the world, or hiding a ninja.

D: I want to be Momonosuke!! P.N. Captain Nobuo

O: I understand. Let me be clear: "On the inside, every man was once Momonosuke." And your heart will be Momonosuke for eternity!! I'm not there yet, but I hope to be Momonosuke when I am an old geezer!!

O: It used to be bad, but she's gotten much better at cooking meat over the last two years. It looks good, but only Luffy's eaten it, so who really knows.

D: In what order did Bepo, Penguin and Shachi join the Heart Pirates? P.N. Amefurashi

O: It's a long answer, but so many people asked that I decided to run through it here. You've read the backstory of Law in volumes 76 and 77. After the incident 13 years ago, Law wandered into the next town over on Swallow Island, crying his eyes out.

D: I was born on June 13th, but I don't share a birthday with any character. I was trying to think of one so I didn't feel so lonely, and then I realized that 6 can stand for "Mugiwara" and 13 can be read as "Ichimi"! So how about if June 13th is "Straw Hat Crew Day"?! It's a party!!! P.N. cherry

O: What?! If you think you can get away with that...you're right! I also got some suggestions for the Donquixote Family members from Andy and Mary's Lamb...but I won't just take them without a fight! Here are the birthdays and the phrases the numbers stand for in Japanese... 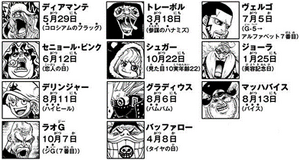 D: Is this all right?

D: What do you think?

D: The Germa castle is kinda werrrp. Does that mean the people inside live their lives kind of werpy? P.N. Luck

O: Actually, it's not that they built a castle that turned all werrrp, it's that they built it to the exact specifications to achieve that level of werrrp. If anything, the people who live there are extremely exacting and uptight!!

D: Hello, Oda Sensei! Basil Hawkins takes his horoscopes and fortunes seriously when he acts. If his lucky item for the day was a miniskirt, would he wear it? P.N. Moss Mink

O: Well, he's very confident in his fortune-telling, so I daresay he would wear it. His leg hair is quite thick.

D: In chapter 823, you introduced Sarie Nantokanette, queen of Goa. Is she based on Marie Antoinette? I'm so jealous of Sterry—he's ugly and horrible, yet he snagged a beautiful wife. I'm ugly and not rich, but I snagged my angry wife with my heart!! P.N. Chores Are Easy

O: Does everyone remember Sterry? He was Sabo's foster brother in Luffy's flashback from Volume 60. Somehow, in the present day, he's worked himself into the royal family and become king! What a punk! And I figured his queen was probably a horrible person too, so I gave her a lazy name! Isntoinette! What kind of name is that?! Don't worry! I'm sure your angry wife is way better than her! 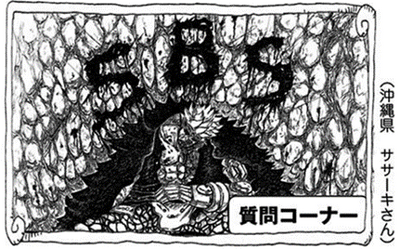 D: Are those Reiju's bare legs? Are the 6 symbols drawn right on the skin? Isn't that kinda sexy? P.N. Takataka

O: Ah, I see. You suspect she might be wearing tights. No worries!! Those are straight-up tattoos!!!

D: According to Den's explanation on page 36 of volume 63, anyone in Fish-Man island can have any kind of child. What's the situation with the minks, then? P.N. OP Girl

O: Same property. There are all biological patterns on Zou: deer with a fox child, or pandas with a panda child, etc. 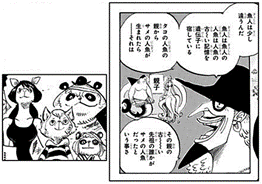 D: Oda Sensei! I've come to ask a question! \(^∀^)/ So, I was reading volume 80 recently. And then Koala said, "What?! We're going to bring all those intense people here again?!!" So it occurred to me...Can you tell Koala something? Um, Koala...Pretty much everyone in One Piece is intense!! Welp, bye! P.N. Nodo

D: Oda Sensei!! Please tell me who from the Straw Hat Pirates like to chew their ice, and who don't? P.N. Goal and Gorilla Pupil No.19 Iona

O: Oh yeah, here we go. The really pointless questions! And I'm gonna answer it! Because the motto of the SBS is "You're not missing out if you don't read it"!!

More people crunch their ice than I expected...

D: Since in chapter 833, you said all four kids were born on the same day, does that mean that Ichiji, Niji, and Yonji are all 21 years old, born on March 2? How old is Reiju? Also, tell me the blood types and heights of the other Vinsmoke siblings. P.N. Katana★Roman

O: Okay. They're identical quadruplets. Reiju was born three years earlier, so she's 24 now. They're each slightly different in build, although it's not striking in number form. I wonder why Sanji turned out so different? It must have something to do with Germa's science.

And that's the end of our time! See you in next volume's SBS!!