This is the collection of SBS sections from Volume 85.

D: Hi Odacchi! I've been counting. Ever since that faithful day in volume 10 when Timmy Ueda first stole the SBS title call (which started in volume 4), readers have begun the SBS corner 60 times! (Doom!) I simply cannot believe that they would be shameless enough to steal your glory!! Go on, Oda Sensei. Scream those words as loud as you can today. Say the words, "the SBS has begun!!!" And once again, the reader proudly proclaims, "Start the SBS!!!"—Shokotan

D: Would Heraclesun be really bad at shitori, the word game where you have to start each word with the last letter of the previous word? --Seikun

D: In chapter 840, "The Iron Mask," young Sanji was reading a storybook about Noland. But I'm more curious about that book of Devil Fruits sitting next to him! That must be the book he used to find out about the Clear-Clear fruit in chapter 464!! --Dorry

O: Well spotted. Sanji did indeed mention both books before in his travels. 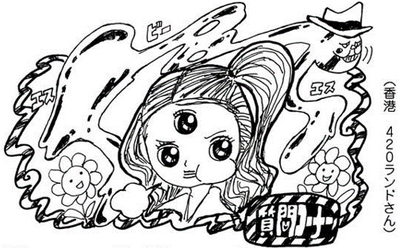 D : Heso Oda sensei!! Although the Mink tribe are animals, in Volume 82 the food that was dished out to Luffy contained meat. It's cannibalism, don't you think? It has been bothering me and I am sleeping 5 hours everyday. P.N. Gurumayuki

O: Truly, even with 81 volumes meat is still eaten so vigorously (sfx : mori mori). The answer was there. Carrot says this in 807. The meat comprises of "hippo, lizard, crocodile and frog". And etc. As the Mink Tribe are born hairy, they do not eat hairy animals but eat meat of fowl and amphibians that do not possess hair.

D: This Nami character figure I bought, where should I decorate it? P.N. Captain Nobuo

D: Odacchi...I will start this SBS.

D: Why don't Sanji's eyes turn into hearts when he is talking with Reiju? P.N. Match & Takeshi

O: That's how it is with brothers and sisters, right? I used to get in numerous fights with my elder sister when I was a kid. It would be weird if Sanji turns his eyes into hearts to talk with Reiju.

D: Who is the fastest crewmate when they run a 50-meter race? P.N. Nagatanigawa

D: Why does Big Mom call herself "Ore" (おれ) despite her being female? P.N. Youth Age 12

O: I've heard that both males and females sometimes called themselves "Ore" long ago. Even now, it is commonly used in some areas in Japan.

D: How can I become a editor in Jump? Did editors graduate from famous colleges? P.N. Koichiro

O: I can feel your sincerity about this, Koichiro. You really want to be an editor, don't you? As a matter of fact, many editors do have higher education degrees. But they're all freaks and perverts. The only requirement for hiring at Shueisha, the publisher of Jump, is a degree from a four-year college. You don't need to have graduated from a very famous university to take the company test. And everyone turns into a pervert as a result of all the studying. Keep your head straight, work hard, and you can be my editor someday, Koichiro.

D: Can I lick the syrup off of Nami's body? P.N. Chamoro Shimizu

O: It's you again, you pervert!! You keep ruining the morals of this manga!! But hang on!! I feel like the handwriting on this postcard is different!! Did you always have such nice handwriting?! You better not be an imposter!! If this isn't the real Chamoro...you can go.

No, you can't!!! Don't send me these postcards, whoever you are!!

D: The 2nd division commander before Ace is me. P.N. Capt. Nobuo

D: In the "sons' cups" scene in chapter 800 (volume 80), there's a panel where everyone holds out their cups. On the sound effect bubble, there are eight marks! But there are seven of them! So who was the last one?! Tell us! P.N. Mutsu 2

O: Whoa...! You noticed that?! Who does that?! It does seem weird that there are seven cups, and yet the sound effect is coming from eight directions. This is kind of like a live-TV incident. As a matter of fact, the last one belongs to some old lady who just wandered by. I'm very sorry. She's very sorry too, so I hope you can let this one slide.

O: It could be, for example, the strength of mind not to be led astray by the deceptive lies of adults who cannot admit their own mistakes. You have to be strong enough to say, "No old lady's just gonna be 'passing by' on a boat! That makes no sense!!"

D: If Doflamingo took off his glasses, what would he look like? P.N. Saki & Shun 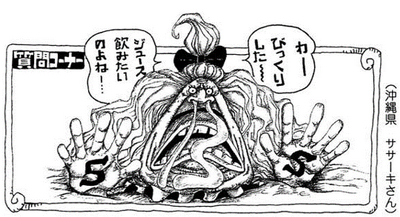 O: Aaaaah!! Underneath his sunglasses was another pair of sunglasses!! So what's under that pair, then?!

O: What?! You want to decide it just like that?! Okay.

D: My birthday is July 9, but there aren't any characters that share it! So how about if Sanji's mother, Vinsmoke Sora, was born on 7/9? July for its beautiful clear "sky" (sora), and 9 for the ku sound in "Vinsmoke"! P.N. Space Planet Peace

D: Oda-sensei! I thought of a birthday. The most famous of all the hidden characters of One Piece, Pandaman, is born on February 29th. (Because it's a special day that's usually hiding.) P.N. Kajusa

O: Oh man, that's perfect! But I can't just rubber-stamp that...unless I do! Do you share a birthday with any characters? You can check the birthday calendar on the one-piece.com website.

D: You said Zoro doesn't eat ice in the previous SBS, but he ate it in chapter 701. P.N. Dobbin

Yeah. Well... It only looks like he's eating his ice. Just an impression. But the thing is...Zoro doesn't have a mustache, soooo...I dunno, that might not be Zoro...y'know? So that's probably not him. I mean...is that Zolo? I'm not sure...

D: In chapter 845, I spotted three other characters who look just like Opera. Are they identical quadruplets, just like Sanji and his brothers? P.N. ? 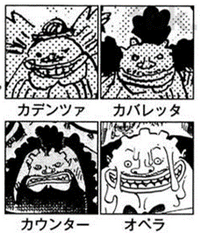 O: Technically, they're quintuplets, but you don't see the last one. There's Opera, fifth son of Charlotte; Counter, the sixth son; Cadenza, the seventh son; Cabaletta, the eighth son; and Gala, the ninth son. Big Mom is currently 68 years old, and for about 42 years, she had children annually. Yet she had 85 children, so there are tons of twins and triplets. The biggest batch is a decuplet bunch who are all 18 years old now—five boys and five girls!! Big Mom, indeed!!

D: In the corner of page 58 of volume 83, is Nami wearing armor? Is that just a sign of how much she fears an Emperor of the Sea? And the way she takes it off in an instant is super impressive!! P.N. Kawamacho

O: Uh, that was her gear from fighting the sea ants the night before. She changed because they reached the island. And now, we're out of time! See you in the SBS next volume!!