This is the collection of SBS sections from Volume 87.

D: Ever since I was a kid, I've liked animals, so I've really enjoyed the arrival of the Minks! To express my gratitude for this, my pet cat has one thing to say... Nyaaaa! (SBS Start!). -P.N. Uranium Rabbit Year Y

D: Odacchi!! Hello!!! Bege's child has a face just like his and there appears to be facial hair under his nose, but as a baby, how does he already have facial hair? How far down does it go...? If... that... is how it is... changing diapers, does Chiffon not dislike it? -P.N. Portgas D Ayasu

O:  Firstly, Chiffon doesn't dislike it. Because she's his mother! Now, the triangular part under Baby Pez's nose. Well, if you think about it normally, it's like Don Takosu, right? Well I think so. It looks like whiskers. Now the answer is! Do....Beard....Chin hair....!! I won't tell!!

D: Is it alright if i lick Smoothie's legs? said Shimizucha Moro. -​P.N. Match and Takeshi

All you good kids have to go to the dentist. Luffy and his crew are strange people.

O: Apparently it's called ''Griffon''. We've known Shanks ever since the very first chapter, but how does he actually fight?

D: Oda-san, hello!! Vinsmoke Judge and Sanji's hair are yellow. If this is so, why do the four remaining Vinsmoke kids dye their hair when they were little? Or was it caused by the Lineage Factor? -from Kunlun Pretzel

O: This question is from overseas, huh. Certainly the brothers having different hair colors is odd, I guess. You've already given the answer. This is because of the manipulated Lineage Factor. Sanji was the only one not affected, so he and his father have the same hair color.

D: I know Pudding's true form, but I still love her. -P.N. Cute is Justice

O: You're going down an evil path. Men are sad things.

D: Oda-sen... Odacchi, hello! I was reading volume 86 and really became a fan of Katakuri. In chapter 873, why did Daifuku (the third son) refer to Katakuri (the second son) without a honorific? Are they twins who don't resemble one another? Why is Katakuri the only one who is not a minister? Please tell me his age and height!! -​P.N. C(Charlotte) Yurie

O: Yeees. That's a bunch of Katakuri questions coming in fast!! There's no way Daifuku is his twin! Actually, they're triplets! They're 48 years old.

There are 34 islands with 34 Ministers in Totto Land. It's all handled by Big Mom's children although that's what I have decided, but I'm not sure whether to show all information or not. There are just too many profound/background settings.

D: Baron Tamago has the power of the Tama Tama no Mi, so after he turns into Count Niwatori, how does he turn back into Baron Tamago? -​P.N. Match and Takeshi

O: Here it is. Tamago comes after Niwatori.

This is for anyone who doesn't understand.

D: Odacchi!! Hello!! This is sudden, but there's something I want. That is Kizaru, Fujitora, Akainu, and Aokiji as the opposite gender!! Can you even do that? 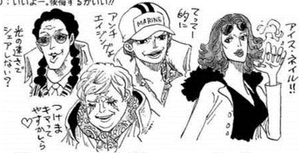 Fujitora: I wonder if you can bear it

Akainu: It's a little anti-aging

D: Oda-san, hello! In the color cover for chapter 874, Ace and Sabo are making angry faces, but what happened? Shanks is laughing... -P.N. Sakuraki Chisaki

Ace: Master Red Hair! Thanks for keeping an eye out for our little brother, you bast- I mean sir!!

Sabo: My name's Sabo. It's nice to meet you. I'm also Luffy's big brother! You have my thanks too! Thank you very much. As for the future...

O: That's why Ace learned manners from Makino long ago, to thank Shanks.

D: Oda-sensei, hello. In chapter 852, there's a scene where Jinbe saves Luffy and Nami. At the time, Nami's clothes are ruined. But I turn the page and she's dressed! Moreover, in the previous panel it goes "goso goso (sound effect)" and is that Nami changing clothes!? What is she doing? Tell me, Odacchi. -P.N. Save Me from Summer Break Homework

O: Yep, she got new clothes. Because the old ones were ruined.

Here's the "goso goso" part.
Look here in the previous panel. Nami notices something. It's the defeated soldier's clothes.
From the goso goso part, she's wearing too big clothes. In other words, she took the big soldier's clothes by force.

O: Nooo you noticed that- amazing!

Yes, that hand in Hanafuda is called a "Shikou (kanji for four light)."

It is read as "Shikou," but it does seem to suggest Shanks's future as one of the Yonko. Well done.

D: Hello. I want to fill the Birthday Calender!

​How are these birthdays? -​P.N. Shin

Yes here! Because I can't explain the birthday deciding postcards, I think you should go look at the online presentation. Use a proper pen name at ONEPIECE.COM's official page where you can go fill out the birthday days. Is your birthday taken? Anyways, please take a look at the home page. What is wanted in SBS is unchanged.

D: Kid and Killer are the two who dislike curry udon, but what happened in the past to cause that...??' -​from Rebell-chan

O: Those two are good friends, and at the same time they loved being partners from the beginning, they took on Shiruton Doruyanaika-chan together, that day they ate curry udon, and when they finished saw Doruyanaika-chan, her whole body was dyed brown, the two laughed and she hit them both real good. It's a bitter memory of their youth. Yes! Until next volume.