This is the collection of SBS sections from Volume 98.

D: Oda-sensei! Who would've thought there'd be an UFO in a place like this!! The SBS has started. – P.N. A man who has been acknowledged by Higuma

D: Oda-sensei, hello! My mom is flatulent all day round, so I was wondering if she's the user of the Koki Koki no Mi. – P.N. Hata
Note: Koki Koki no Mi translates to "Job Job Fruit", as in a fartjob, the… ehm, fetish of enjoying farts

O: No, I think that's just showing her internal organs are all in good health. Alright, next question.

D: Oda-sensei! Hello! According to my grandma, Yamato's birthday is on November 3. Is that so? – P.N. Hata

O: Well then, guess it is November 3.

D: I'm really, reaaaaaally curious to see how Kid and Killer's first love, Shiruton Doruyanaika, looks like! I wonder, what kind of face does she have? I bet she's a real cutie! – P.N. Onimaru

D: Oda-sensei, hello!! Just recently, I used Conqueror's Haki on my 1-year old little sister, but she just laughed at me. Why is that. – P.N. Yucchi

O: That is because she possesses the qualities to be a king.

D: Odacchiiiii!!! In Chapter 977, in the scene after Nami hugs Jinbe, I spotted Sanji biting on a handkerchief while going like "GHH–" out of jealousy!! – P.N. Pure-hearted middle-school student who wrote about wanting to meet Odacchi at a Tanabata festival

O: Wow, I'm amazed. Well done on spotting that~ Since it was cut off by the page format, you might have to use your imagination a little. This Sanji is very well hidden. Good job~

O: Very well. Seeing the passion in your handwriting, I feel obligated to include this question as I received it. Will "Five" be a thing…? Right now, the enemy we have to defeat is the man said to essentially be the world's strongest. Because of that, the world is in the age of transitioning from "4G" to "5G". "G" means "gear", right?

D: In Chapter 978, when Ulti-chan starts ending her sentences with "-arinsu", Page One says "is this another one of your weird trends?", but then what were her speaking trends before this one like?! – P.N. Yotsuyaeto

O: Right. Ehm… she used to add "gonsu" at the end of her sentences. A bit before her debut she went like "Pay Pay, oh me poor little thing-gonsuuuu". Right now she seems to like using "arinsu".

O: Hey everyone, so I made a little blunder! I lost the postcard (or was it a letter?) a reader sent me… sorry… But it's fine, because I remember the contents. It was from a fellow called eeyan-kun, who asked me to take a look at his YouTube channel! It seems he does videos where he crafts OP figures! I thought I recognized one of the figures, and I realized it was because he previously submitted to the Usopp Pirates Gallery. It's pretty fun to think some readers have become YouTubers…! So please go give "eeyan" a look. Good luck with the channel…! Ah, I've heard they did a collab with Sanadacchi, but you're better off not watching that.

D: So I was studying about old mixed baths and heard that back in the day, anytime young women would come in, the grannies would protect them because the perverted bastard Odacchi would be approaching. Sheesh, you perverted bastard, always getting into trouble! Anyways, just wanted to let you know I'm changing my residence to a bathhouse. – P.N. Sanadacchi

O: Hey, hold up grannies! You're in the way! I can't get there if you block me! You're stopping me from seeing what I want to see!! This is infringing on my rights, I won't stand for it!! OUCH!! Wait hold on, stop it with the cock and ball torture!! OUCH!! STO… STOP…!! STOP…!! CORRUPTING THE SBS! SANADAAAA!! This rascal has appeared again!! Grannies, go cock and ball torture him!! OUCH!! No, not me!! Sanadaaaaa…!! Anyways, yeah. To anyone who has heard about this thinking it was because of perverts, even all the way back in ancient times, people still felt embarrassed about bathing together, so older women made sure the young ones were properly protected, or so goes this story about Japanese culture!

D: The Marines have Admirals, Vice Admirals, Captains, etc., but while I think the Fleet Admiral is the one at the top, in what order are the others graded? – P.N.[H.U]

O: Now that you mention, I don't think I've explained before how the Marines are structured. Please see here how they are graded~

D: All the officers of the Beasts Pirates are named after card games, right? – P.N. Akibee

O: Yep, indeed. The three All Stars are pretty obvious, but all of the Flying Six, the Numbers, and the Headliners, only excluding Drake, Apoo, and Hawkins, are all named after card games, as well as the K (King), Q (Queen), J (Jack), and 1 to 10 cards. If I were to list them all, I'd be filling this entire page. I hadn't even heard about some of these! I imagined there were many types of games out there, but there really are many ways to play with just playing cards alone. By the way, in Dressrosa Doflamingo being called "Joker" is a remnant of an initial idea where Doflamingo was going to fight as a powerful companion of Kaidou in the Wano Country. He's quite the tricky opponent, so I'm glad we got rid of him at Dressrosa!!

O: Aaah… you mean from my cheeks? My beard is not that well trimmed, so it might feel gross, so let's stop. By the way, have you considered changing your pen name?

D: Oda-sensei, I have a question. Those who ate SMILEs grow horns, right? Then why do Pleasures have one horn and Gifters two horns? – P.N. Hadokku 10

O: So you noticed that, huh. That's just fashion! It's not enforced, but Pleasures are allowed to sport one horn, while Gifters and above are allowed two, or so the rule goes. 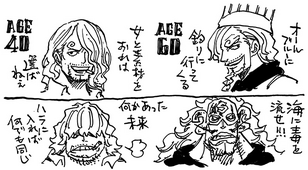 O: Very well. I received many requests about this. Enjoy!

Bottom row (a future where something happened):

D: Odacchi!! I have a question!! In Chapter 962, "Daimyo and Vassals", a young Izou can be seen wielding a katana, while Kiku wields a gun, but currently it's the complete opposite! Is there any reasoning behind this? – P.N. Yuu-kun

O: The gun Kiku was holding was just her brother's gun, nothing more to it. I'm surprised you spotted that in such a small panel~. The two of them had a debauched father and were forced by depraved adults to entertain them ever since they were small, but even if they were poor, they were very close to each other. One of the tricks they used to entertain was sharpshooting, which Izou had 10/10 flawless precision in. However, he was never very confident with the sword. As time went by and he ended up on Whitebeard's ship, when he showed off his shooting, "Flower Blades Vista" told him "you should use that specialty of yours to protect others!!". What good is a samurai obsessively sticking to a sword if he cannot protect their lord with it? Samurai is a way of life after all. So Izou abandoned the sword and picked up the gun.

D: If Zoro, Nami, Usopp, Sanji, and Franky were to become ability users, then what kind of fruit do you think they would have eaten? -P.N. 420-land

Zoro: I'd want the sword to turn into a dragon rather than Zoro. I think that would be insanely cool. Nami: A true weather lady, now no one can stop her anymore (apart from Luffy). Usopp: The perfect pocket for someone like Usopp who always has something up his sleeve. Sanji: It allows one to slip through walls or swim on the ground. If given to Sanji, it would become quite the nasty ability. Franky: Can't get any better than this for an ability for Franky.

D: The vassal who taste tested Momonosuke's food in Chapter 971 and the vassal who reported Oden's foul deeds to Sukiyaki in Chapter 960 are the same person, right? It seems he has been supporting the Kozuki family for generations… When I had realized that, tears started flowing out. – P.N. Hikuma

O: Indeed. That's exactly the case. His name is Banzaburo, he's a samurai that was picked by Sukiyaki in his youth and who is immensely grateful for that.

D: I want to ask you a question -> Leave or Life? – Pen name: Negibouzu

O: THAT'S SCARY!! Eh…?! I don't wanna give up lifespan! I pick leave! I'm leaving! All right, that's all for the SBS! Until next time~!! ZWOOOMM

NewWorld - Artur from The Library of Ohara.