Active
The Stan Maley was an anime-only Marine ship that was damaged in a storm on its way to Navarone. 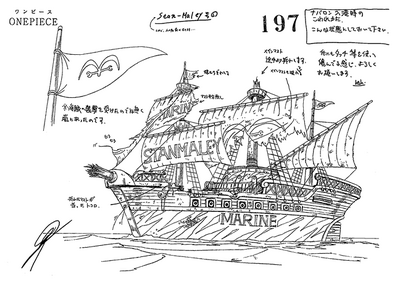 The Stan Maley had green hulls with brown lining, along with standard Marine sails. It had the appearance of a normal Marine ship, but it is now damaged due to the storm.

The Stan Maley arrived at G-8 Base from Marine Headquarters. The base almost refused allowing its entry because some pirates were reported to have invaded the base.

Later, the captain of the Stan Maley was ordered by Commander Shepherd to aid in the capture of the Straw Hat Pirates.