Curiousity hits me... From One Piece data book red: 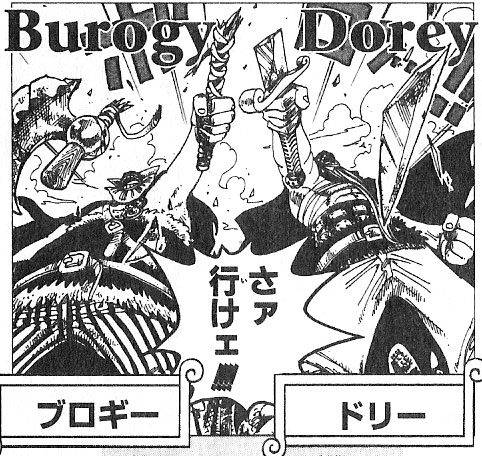 I guess it would be best to change names per how they are spelled in the data book such as the case presented. However if there are variants like in the cases of Jyabura and Iceburg where their names are spelled differently in certain books, then it is best to choose the one that is most appropriate. The most appropriate spelling would be the one that is commonly used in most source materials like with Arabasta. If sources can't be identified then the one that is commonly identified per fan base I guess would be the next best thing.

By the way, where did you find this picture from the Red Data Book again. It would be nice to see how all the spellings and stuff are written for verifiability.Mugiwara Franky 11:42, 7 January 2008 (UTC)

Someone once uploaded it onto Manga helper. I downloaded the raw ages ago. I have blue and yellow also, but no one has ever done a full translation of them (just given the fandom a quick skim). Aside from the odd spelling, thats about it. I've read the raw hundred times, had NB not been asking for Romance Dawn V.1 I wouldn't have noticed this, I tend to skim through it since my Japanese is very limited at the best of times. Just yesturday I noticed it. One-Winged Hawk 12:58, 7 January 2008 (UTC)

Okay I changhed it and MF changed it back. Aye, it was from the Data Books as to date the only spelling I've seen of their names. I note I have tried to open a discussion, however we lack discussion skills around here it seems... One-Winged Hawk 15:24, 19 April 2009 (UTC)

I accidentally reverted it since there were alot of moves without discussions made by GODKING OF ICE CERBERUS WERE-GARURUMON then. Since only the article's name was changed with the rest of the article remaining the same at the time, I assumed it was one of his. Sorry.Mugiwara Franky 01:08, 20 April 2009 (UTC)

Lol, Okay I see now, I forgot to change the names on the page... Sorry about that. I'll move the other giant across, unfortantgely this is the last thing I'm doing since I've run out of time before I leave. See you guys on the 27th! One-Winged Hawk 07:30, 20 April 2009 (UTC)

Is that page scanlated or is that how it originally is? Because Burogy just sounds like how the Japanese would say it phonetically Drunk Samurai 18:23, 23 April 2009 (UTC)

Hold on! I've remembered I saw something when I read in One Piece vol.14. After I check it, and here the result, at page 17.

I think about the databook. of course I had it, see the picture and "Dorey and Burogy" but I've thought that the databook is wrong. Maybe because Shueisha, maybe because Oda-sensei. But everything is in manga must put at first in prior order, this is "canon", right? Their true name must be "Dorry" and "Brogy".--RobertTheodore 13:58, 14 July 2009 (UTC)

I think the databook is most likely wrong, and that we should go with the bounty spellings. The Pope 18:26, December 6, 2009 (UTC)

As I've said before on the Brogy/Burogy article's talk page, I think we should go with using the names written in the actual manga as opposed to the guidebooks--KnightoftheSea 03:29, December 8, 2009 (UTC)

I've explained elsewhere what happened. This discussion is dated now and we ohave a current discussion on the other giants page right now. One-Winged Hawk 10:44, December 8, 2009 (UTC)

I've actaully added the note of names in gallery form to both pages to explain why two names can exist. The Data books are approved by Oda that much I can remember. I think its safe to say Oda has some major involvements since one of the data books actually has his work space and details of things in it there. I doubt Oda would approve of his entire studio space being added without some involvement. There are photos in there too (B and W one at that) of things in there so there you go. One-Winged Hawk 10:50, December 8, 2009 (UTC)

Retrieved from "https://onepiece.fandom.com/wiki/Talk:Dorry?oldid=1053225"
Community content is available under CC-BY-SA unless otherwise noted.