Ok this chapter today i dont know if im the only one who've seen it but luffy used technicaly a jet elephant gun against fujitora right?

Isn't that Dressorosa's first appearance? The environment is the same and you can see even the palms Rayleigh92 (talk) 16:21, September 22, 2012 (UTC)

In Chapter 701 there are pictures of Flamenco style dancers, they serve paella, and one of the buildings looks like the architecture of Guadi in Parc Guell in Barcelona. All of these are major aspects of Spanish culture and I think it's worthwhile to mention on the page. It's been mentioned on the Acacia page but I think it should also be mentioned on the actual Dressrosa page

It probably should be. In addition to all those things you mentioned, "rosa" is the spanish word for pink, and Donquihote & the card seat people's names are all also spanish. JustSomeDude...  Talk | 17:32, March 6, 2013 (UTC)

It also looks like Law's crew didn't have enough room on the map and had to write Rosa below.DancePowderer Talk 04:27, March 7, 2013 (UTC)

Guess we'll wait until another romanization, then. Still, it wouldn't hurt to have the two-word title as a redirect. uknownada Talk 05:29, March 7, 2013 (UTC)

You can't really tell since it's abbreviated. Best to wait for the whole name to be written formally somewhere.DancePowderer Talk 06:30, July 4, 2013 (UTC)

Do we want to create a character box for the citizens of Dressrosa (like we have for the Alabasta page)? It doesn't have to include the donquixote family, but should identify folks like Violet and Thunder Soldier --Kingluffy1 (talk) 14:19, March 27, 2013 (UTC)

Jora is not entered in Dressrosa — Preceding unsigned comment added by 78.9.25.87 (talk • contribs). Please sign your posts with ~~~~ next time!

I made an edit about how Dressrosa takes inspiration from the art of architect Antonio Gaudì, notably for the roofs which look similar to what can be found in Park Güel. That appeared quite evident from the last anime episode, as the colorization helps showing that inspiration. However, said edit was reverted without any explanation, and so I would like to know at least the reason.

Without confirmation from Oda through an SBS, we can't cite characters or places as being inspired by specific real world parallels, only generalisations. It's recommended to throw away socks after a year 00:55, February 10, 2014 (UTC)

Then would saying the art style looks similar be not going over the hedge? Considering Oda already said he took inspiration from Catalonia, which is where Barcelona and Gaudì's works are, it seems logical. However I do understand how speculation works on wikis, I should have phrased that sentence better in the first place.
Pauolo (talk) 01:04, February 10, 2014 (UTC)

Did Pica move the palace on top of flower hill? where the flower fields are? Look closely at the alst page of 745 and you'll see the palace walls and their corners on top, when on the previous page, you don't see it on the flower hill. Anima40 (talk) 12:08, April 23, 2014 (UTC)

As I brought up on Talk:Flower Field, this page really sucks. It does not follow the proper location page layout.

Also, what is the point of the Birdcage section on this page? It has little to do with the location of Dressrosa and I don't see why this information needs to be on this page for the location rather than pages for arc summaries, etc.

Anyways, we need to talk about the birdcage issue, and I'm going to leave this as an active discussion until the layout problems are resolved. JustSomeDude...  Talk | 22:56, June 11, 2015 (UTC)

This is why I came up with an idea for a Birdcage page and two times now it has been ignored. I'll say we should get rid of the birdcage section

Not much to say about the layout problems, they just need to be fixed. I actually agree with Joe on Birdcage, it could have its own page. Awaikage Talk 02:50, July 6, 2015 (UTC)

The problem with that is if people see Birdcage getting its own page, they will start advocating that every single attack should get its own page, which we don't need. Maybe make it a subpage instead.DancePowderer Talk 15:00, July 6, 2015 (UTC)

How about something like Birdcage Incident? Do that and people won't think that attack names would be getting it's own page.

Any page called "Birdcage ___" or "Birdcage Incident" would be a conjecturally titled article, that we could not have. I get the reasoning behind wanting its own page or something, because the effects of the cage greatly extend past what we can include on the attack page, but it might just not be feasible to have it on its own page. Also, any page would have to mention the birdcage on Minion Island as well. JustSomeDude...  Talk | 21:44, July 6, 2015 (UTC)

So make it a subpage. We can split the page between what happens before the cage went up and what happened while the cage was up. Call it something catchy like "Inside the Birdcage" or something like that. The subpage could also have the ending of the arc.DancePowderer Talk 19:57, July 8, 2015 (UTC)

Remove it completely from here since it doesn't belong. The information should already be on Dressrosa arc article anyway. SeaTerror (talk) 20:07, July 8, 2015 (UTC)

A subpage of Ito Ito could work. It would be brand new territory since it's kind of describing the long-term effects of an attack, but it could work. We would have to try to write it in such a way it is definitely NOT a history summary though. JustSomeDude...  Talk | 00:13, July 13, 2015 (UTC)

The usage and effects of Birdcage is already covered on the Ito Ito no Mi page, the star bounties are covered by the Dressrosa Arc page (minus the actual worth of each star), and the History section on Dressrosa's page also describes how Pica rearranged the landscape before Doflamingo sliced it up with the Birdcage. Everything in this Birdcage section is redundant and should be removed completely; there's no new information here that isn't located on another related page.

Also, while flipping through the above two pages, I noticed that we list Birdcage as officially being "Torikago" on the Ito Ito no Mi list of techniques, but on all other articles we call it "Birdcage." Is this a translation consistency issue? MizuakiYume (talk) 06:01, July 13, 2015 (UTC)

Now that Dressrosa is in ruins...Edit

I moved the translation issue to Forum:Consistency in Translation.

Now, in addition to having a real problem with the things like the article not listing the geography properly, we have to deal with the fact that there are now really TWO versions of Dressrosa's geography, since it got fucked up by Pica moving things, and the birdcage, and Luffy being Luffy.

How should we deal with the two versions of the layout? Separate sections for before and after? Just explain the changes in the sections for each landmark? I really have no idea, and I would appreciate actual input on this, as this one of the more important issues currently. JustSomeDude...  Talk | 21:19, August 15, 2015 (UTC)

Not sure if my opinion matters but, why not wait till Dressrosa is rebuilt and then place a geography for Dressrosa and post-crisis Dressrosa? In the mean time, adding that it is in ruins right now to the last part of the section would suffice?    Profile   /   Talk     08:27, August 17, 2015 (UTC)

The article is now a stub. I have added all the sections it needs, and added the empty section template to them all. Because of the geography changes, the outdated template is here as well. Hopefully now we can get one of our most-read articles up to the correct standards. JustSomeDude...  Talk | 13:48, August 19, 2015 (UTC)

Well the simplest solution would be to just describe what happened to the island landmark by landmark, but that would end up with the whole page being clustered. My proposal is creating a subpage: Pre-Dressrosa Arc/Post-Dressrosa Arc. This way we can neatly describe the geography and other aspects without bringing every change into the information, which would otherwise cause for a rather chaotic description imo. The only downside would be having the same information twice on some sections.. But hey, it's just a proposal. Aurora[1] | Yes? 14:04, August 19, 2015 (UTC)

Everything should definitely be on one page here. There's not enough content for a full subpage, but definitely enough that we need to rethink how to do the page. We also need images for the post-arc locations. JustSomeDude...  Talk | 03:34, August 20, 2015 (UTC)

Maybe just some general summary stuff in right under the Geography heading? There we can describe either in paragraph form or subsections the general changes that occur throughout the country, as well as placement of things. Then in the section for each location, we can describe changes to specific landmarks. JustSomeDude...  Talk | 12:49, August 20, 2015 (UTC)

Should the Birdcage Section Exist?Edit

The Birdcage section should not exist on this page. We need to continue the discussion about moving it or deleting it altogther. I'm leaning towards delete it all, because after reading it, it says little to nothing that the history section doesn't already have. JustSomeDude...  Talk | 03:34, August 20, 2015 (UTC)

With the birdcage the island changes massively. It's terrain is heavily altered by Pica, there's a masive birdcage (duh XD) and a lot of buildings and landscapes are destroyed. I think it's important.

The Birdcage is an important event in the history of Dressrosa, so I believe an article should definitely be dedicated to it. However, if it should be part of the Dressrosa page (like Upper Yard Survival is part of Upper Yard) or if it should be on a different page (like The Nightmare of Barujimoa and The Legend of the Sacred Burning Beast of Barujimoa is separate from Karakuri Island) should definitely be considered. (Shadoguardian (talk) 14:24, August 20, 2015 (UTC))

We run into many problems with this: If you move it to a new page, the title is conjectural. If we leave it as a section here, it does not fit the layout guidelines.

The best solution I have is just make sure the information is represented in the article, both in terms of history and geographic changes (see the section above for the geography issue), and remove the section entirely. JustSomeDude...  Talk | 15:17, August 21, 2015 (UTC)

First take whatever information from there that is not in the history section and move it there, then delete it. Don't want to remove vital information. Yata Talk to me 01:28, September 1, 2015 (UTC)

Oda's way of spelling this is Dressroza. roza. z.

Thread where pic is: http://www.narutoforums.com/showthread.php?t=1050471

He has spelled it as "Dressrosa" in the actual series, which takes precedence over some random notebook. Awaikage Talk 16:16, October 2, 2015 (UTC)

Yeah I'd say so too. 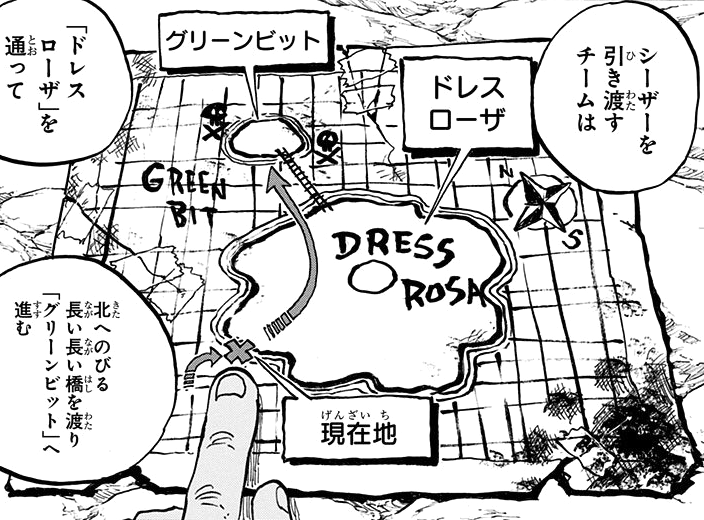 Dressroza is probably just the way you pronounce it

Dressrosa or Dress Rosa after all? Edit

So is there any 100% proof that Dressrosa is Dressrosa and not Dress Rosa?

There's no spacer in the Japanese word and the romanized word is clearly separated to fit on the island, so yes. Kaido King of the Beasts (talk) 11:21, July 7, 2019 (UTC)

Retrieved from "https://onepiece.fandom.com/wiki/Talk:Dressrosa?oldid=1654796"
Community content is available under CC-BY-SA unless otherwise noted.