To the thin, moustached guy ordering Spandine to shoot Clover:

This one has no facial hair, while when the thin guy spoke, we never saw his mouth, it was obstructed by his moustache the entiere time. Now, it MAY be the young guy, but given the COMPLETE lack of even a small moustache shadow, it could be the Ghandi guy in a strange angel. But it definitely wasn't the thin, moustached guy.

In the anime, it shows a light thin mustache hinting the youngest elder ordered the shooting. Please watch episode 227

Just watched Ep 151 with their first appearance. Gandhi is definitely voiced by Ogata (his voice is very recognizable), while I believe Rabbi is voiced by Noda. They were the only 2 who spoke in the episode, and the Japanese wiki lists Noda and Ogata first in the Gorousei's list of seiyuu. Idol Choujin Showtime 16:34, 27 July 2009 (UTC)

I think it's pretty safe to say that the Gorousei is, in at least appearance, based on leaders. I'm mostly thinking about the Gandhi- and the Gorbachev-gorousei's. With that in mind, doesnt TTM-gorousei look like Albus Dumbledore? --FifthDisciple 01:38, November 15, 2009 (UTC)

The correct order of the voice actors gorosei is as follows:

Keiichi Noda: This elder has a scar on the left side of his face, wears a hat over gray dreadlocks, and wields a walking cane.

Masato Hirano: This elder is bald, and has large birthmark on his forehead spots, much like former Soviet premier Mikhail Gorbachev.

Kenichi Ogata: This is the oldest elder looking. He is bald, with glasses and a white gi, much like Mahatma Gandhi. He Also holds a samurai sword with hin. He is the only one of the five not to wear a black suit, and the only one without facial hair.

Yasunori Masutani: The youngest looking of the five elders, he sports a beard and blond hair of the Same color, and has a scar on his chest. Also he wears his suit with the shirt buttons open, and without a tie.

Oh, sorry I made a small mistake, the elder gorosei is a tall and thin mustached man, was the voice of Keiichi Sonobe in episode 241 and episode 511, and Masato Hirano's voice in episode 277.

Sorry for my little mistake.

Where the dates in the history section come from? We pretty much discharged the AOS thing and I believe we demonstrate there is no way to know our present time in that system. leviathan_89 21:54, 15 December, 2012 (UTC)

Do you think that the Rabbi Gorosei is the leader/mastermind, or we can say, the most elder of them? sorry with my english.Kaizoku daio (talk) 12:31, August 27, 2013 (UTC)

We can't say anything of the sort because that would be speculation.DancePowderer Talk 13:41, August 27, 2013 (UTC)

Gorosei inspired by 5 Permanent Security Council nations of U.N.O, maybe one of them act like USA. The mastermind of the Five.Kaizoku daio (talk) 10:53, September 9, 2013 (UTC)

Hi people. According to the Mangastream translations, It is understood that Celestial Dragons ordered everything and they left the matters to CP0. The Gorosei was ignored by the Dragons. This whole thing makes Celestial Dragons directly above Gorosei. Have I misunderstood something?176.240.2.190 23:49, July 9, 2015 (UTC)

Hey why change Gorosei to Five Elders is it really necessary to change it Cdswalkthrough (talk) 15:43, June 8, 2018 (UTC) 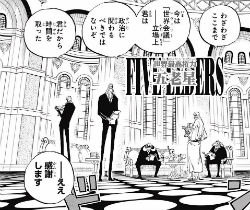 It's 100% proof that it's an official spelling, because it's from the original Japanese release directly worked by Oda. It came from Oda's hands.

Wait, so you think those latin words were a "mistake"? That would mean Oda accidentally wrote "Five Elders", which is insane as that's beyond a typo and actually correct grammar-wise.

Oda is the one that writes his manga, including the romanizations and introduction boxes. KingCannon (talk) 16:56, June 13, 2018 (UTC)

As far as I can tell, they are a different class. They are said to be the highest authority, but I don’t think they are World Nobles.Observer Supreme 17:45, June 11, 2018 (UTC)

That's definitely a mistranslation. They were never called World Nobles anywhere. They were also never stated not to be one either. SeaTerror (talk) 18:12, June 11, 2018 (UTC)

Why would it be a mistranslation? We've gotten very little information about the Elders up until this point and it doesn't contradict anything. Kaido King of the Beasts (talk) 18:42, June 11, 2018 (UTC)

Chapter 793 has Sakazuki asking for confirmation about what I assume was said before, offscreen, if he's correct about the fact that the mistaken mess that was Doflamingo leaving the Warlords, was on orders higher than the 5 elders. Next the elders tell him that they entrusted the matter to Cipher Pol. Sakazuki questions this when he says that the celestial dragons' puppet, Cipher Pol, went right above their heads. This either means the 5 elders aren't the highest ranked Celestial Dragons, that they aren't Celestial Dragons at all or that even the Fleet Admiral doesn't know that the 5 elders are Celestial Dragons. Or maybe Sakazuki was being sarcastic. Oh, It could also mean Oda is a hack forgot about it. SatoshiHP (talk) 09:41, June 12, 2018 (UTC)

"Chapter 793 has Sakazuki asking for confirmation about what I assume was said before, offscreen"

Nope, he was being sarcastic. Otherwise, the Five Elders wouldn't reply to his insolence. He was being ironic and questioning their authority. KingCannon (talk) 14:55, June 12, 2018 (UTC)

Blunder, hidden plot elements, translation ambiguity or whatever it might, it does not exclude the Five Elders from being Celestial Dragons themselves. Sakazuki could have simply referred to the external party as consisting of Celestial Dragons, but which are simply not the Five Elders.   リ チ ャ ー ド   Strong Fist «ℑ» «ℜ» «✩» «☯» Mornin'! ™15:56/12/Jun/2018 (UTC)

The insinuation that Sakazuki implied the Gorosei serve under the World Nobles is wrong. He specifically referred to CP-0 as the puppets of the World Nobles, and was criticizing the Gorosei's negligence that allowed Doflamingo to use the CP-0 to spread misinformation for his benefit. Kaido King of the Beasts (talk) 18:08, June 13, 2018 (UTC)

Retrieved from "https://onepiece.fandom.com/wiki/Talk:Five_Elders?oldid=1691460"
Community content is available under CC-BY-SA unless otherwise noted.