Should we put in an article about the six giant guards of Marineford, or should we wait until we get more information/a name?

Write a lot of text and THEN go fetch the references... Its taking a VERY long time. And I just proved the significance as to why we reference stuff at the beginning. When I went to the Enies Lobby giants' page to find the chapters they did stuff on I found we're missing half the information. There little in the way of references on their pages and barely any details on what they did. One-Winged Hawk 10:56, December 5, 2009 (UTC)

Anyone know which chapter the giant in Impel Down is seen? Its the last reference that needs to be entered onto this page. One-Winged Hawk 11:11, December 5, 2009 (UTC)

These the "giants" right: 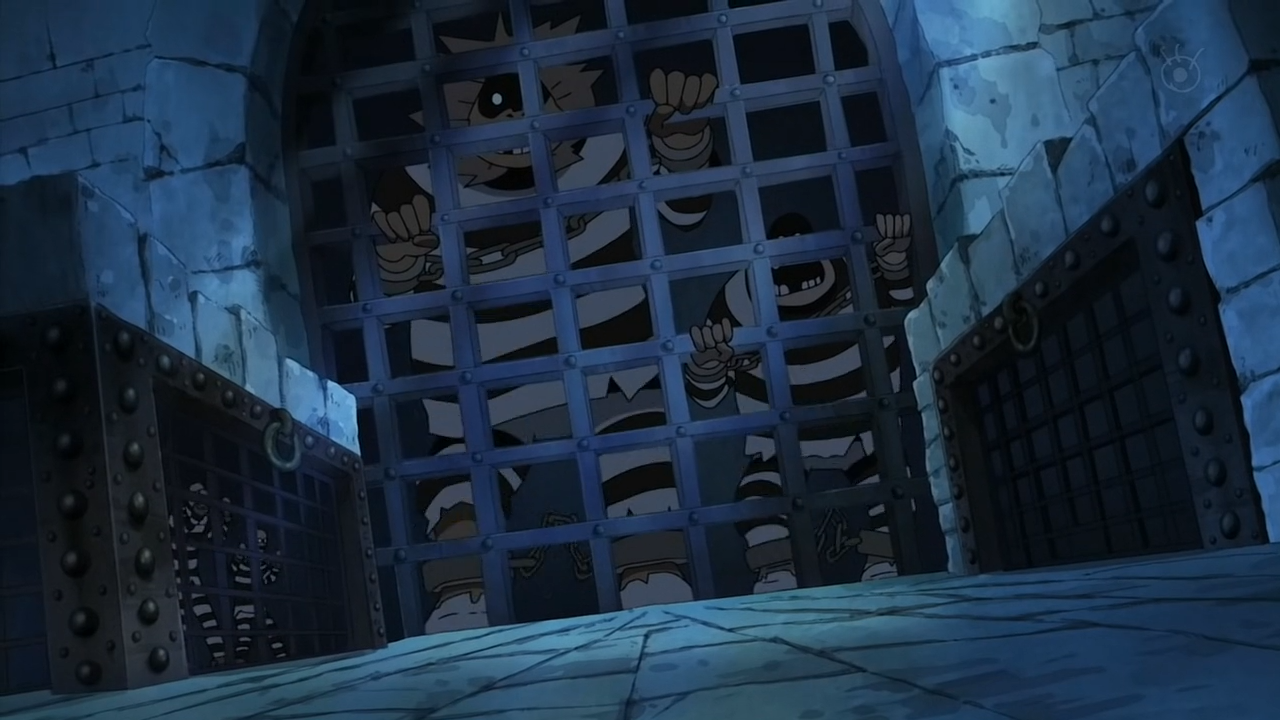 The little boxes at the bottom are cages that are big enough to store probably 2-5 regular sized humans.Mugiwara Franky 13:04, December 5, 2009 (UTC)

I suppose so. The persepctive is a little blown out here to emphyasis the bigger cages behind, hence why I'm double checking. One-Winged Hawk 13:11, December 5, 2009 (UTC)

I think I'm about done with this article, most likely going to do the fishmen article tomorrow. Anyway, I think this should help sort out Oimo and Kaashi's broken pages since I found most of the references for them now. I'm not sure if we're got too much information in the "strength" section now though. :-/ One-Winged Hawk 13:34, December 5, 2009 (UTC)

Its hard to judge them because to be quite frank, there seems to be no defining size. We have the size measurements for the SHs, so we could potentially work it out from there. One-Winged Hawk 16:30, April 8, 2010 (UTC)

In episode 145 as well as at the end of the sky peia arc there are these three towering figures only shown as shadows, I've got a picture of them I'll try to attach. But if anyone else knows more about them i'd be cool if you added a little somthing to either this page or a page about them.

EDIT: I realise now that there are 5 shadows shown, but i saw the three and read on the episode summary where they are referred to as Three Giant Shadows in the character list. And then i wrote this without playing the whole scene.

These people are not giants, they are from Skypiea, a sky island. Because they live 10,000 meters above the sea level, their shadow become that big with the distance. LordRayleigh 21:20, October 6, 2010 (UTC)

The first appearance is technically wrong... John Giant was shown when Luffy had his first bounty, although it was revealed he was a giant. It should be note somewhere at least. leviathan_89 22:11, 9 August, 2011 (UTC)

Well ok, but with the devil fruits' first appearance we use even the times when the power isn't clearly shown, so why make an exception here? Also, I don't understand, are you doubting he wasn't John Giant? In his history section it's stated he was him and I see no doubts on this. leviathan_89 22:34, 9 August, 2011 (UTC)

I think some childrens in Punk Hazard are giants too (the little girl XD ).Can I add the picture of them in the gallery or not ?Horohorogirl 07:51, March 3, 2012 (UTC)

Where should this guy be put, should there be a new category for Giants that aren't Marines nor pirates? Unless he ends up being the same person as Pirate Mercenary Heildion, then I guess he would be in the Pirates category. Reeves92 (talk) 22:48, April 17, 2013 (UTC)

Hajrudin and Bastille are clearly not Giants. Why are they on here? They are nowhere near the height of the average giant in this series. They're tall people but not even close to being giant sized. Genocyber (talk) 10:31, June 21, 2013 (UTC)

Hajrudin was actually called "giant warrior", suggesting he is. So you're only half right.DancePowderer Talk 14:50, June 21, 2013 (UTC)

And after checking a source, Bastille is in fact a giant, so you're actually wrong about both. I retract my last statement.DancePowderer Talk 14:54, June 21, 2013 (UTC)

Bastille is clearly not a giant. He is only slightly taller than the Admirals. A giant in this show are as big as buildings. He could be a halfbreed, but those aren't put in here. Genocyber (talk) 02:03, June 22, 2013 (UTC)

It said he was a giant in the same databook he was named in. Argue it all you want, it's not going to change what hte databook said.DancePowderer Talk 02:07, June 22, 2013 (UTC)

Because learning another language is physically impossible. Try checking the actual source instead of attacking someone's credibility.DancePowderer Talk 03:05, June 22, 2013 (UTC)

He doesn't know Japanese. He uses databooks translated in Italian which means we wouldn't even know how reliable it actually is. SeaTerror (talk) 03:17, June 22, 2013 (UTC)

And in case anyone is still in denial, it does say giant next to his name the same way it has with actual giants.DancePowderer Talk 03:47, June 22, 2013 (UTC)

Of course you do. It's much easier to call bs than do actual research, so I'm not surprised by your reaction.DancePowderer Talk 03:53, June 22, 2013 (UTC)

Hey, what’s the age of Giants? There’s a giant girl named Gerth whose 63 years old. She doesn’t look old she looks young and ther there’s Hajrudin as a child whose whose 18 years old. How can you tell Giants age to human age.Auticticdude (talk) 12:42, May 20, 2018 (UTC)

Retrieved from "https://onepiece.fandom.com/wiki/Talk:Giants?oldid=1546041"
Community content is available under CC-BY-SA unless otherwise noted.